If I was continuing the silly a-themed alliterative titles I would call this post “Apes and Ale in Amsterdam” but the phrase I am using, “je bent in de aep gelogeerd”, is more than appropriate. Ape-proriate if you will. This is ‘In’t Aepjen‘, a celebrated historic brown cafe in the heart of Amsterdam, near the red light district. It was on that Friday of the Symposium when I was totally wiped out by the heat, I had gone back to the hotel for a rest in the evening, to spend some time in air-conditioned comfort. But I got hungry, so I went out to find some food. It was still stupendously hot. I wanted to eat some Indonesian food, but I was passing an Indian restaurant near my hotel that just looked really nice, and I can never resist a good Indian. It was absolutely delicious. I sat in there for a while writing my diary, sweat dripping from my brow. There was a couple on the table next to me, who asked if the food was too hot for me, I said no it’s just the weather! They were visiting from India, and they said the food was like back home, it really was very good. Happy to have found a delicious meal, I went for a wander about Amsterdam. It was already after 10pm by this point, so I didn’t want to go down to Amstelhoeck with the other sketchers, so I went for a walk. I had wanted to find a proper old ‘brown cafe’, and maybe get one last sketch in. I ended up coming across ‘In’t Aepjen’, which was small and full to the brim with character. Brown cafes are old Dutch pubs, called brown due to their dark and cozy interiors, usually wooden and often stained with decades of smoke. No smoke any more, thankfully, but the brown was very much in this cafe. It was decorated with lots of monkey themed items, and barrels and ships and other knick-knacks. I decided to continue drawing with a brown Pitt brush pen, and knocked out the panorama above, which took me just one beer to draw. The beer in question was the ‘Aepjen Bier’, red and tasty. Click on the image to see it in more detail. I chatted with the barman, who told me the story of the bar, its name, and that Dutch phrase.

The brown cafe was opened in 1519 on Zeedijk, so it was celebrating its 500th year, and the name means “in the monkeys”. It was a place that would give lodging to sailors, many of whom would have been returning from distant exotic lands, like Indonesia, this being the Dutch Golden Age of Exploration, bringing back many things, including monkeys. To pay for their lodgings they would sometimes give the monkeys to the owner of the cafe, who would then sell them to a local whose animal gardens would be what became the Amsterdam zoo, but in the meantime there would be monkeys all over the shop, and it wasn’t a great place to sleep when you’ve got monkeys jumping about all over you, with their fleas and lice and banana skins and PG Tips and so on. In fact people would get sick from staying there, bringing rise to a common phrase in Dutch, “je bent in de aep gelogeerd”, which meneertje barman told me translates as “you are fucked up by the monkey”. I suspect ‘gelogeerd’ is probably closer to ‘lodged’ but the barkeep’s colourful local translation is better. Its written on all their stuff, and I’m assured this phrase is well known in Dutch, and that it does actually originate from this cafe. To be “fucked up by the monkey” is to be having bad luck or be in trouble. I went home having learned a new Dutch phrase, repeating it to myself as I walked through the narrow streets back to my hotel in the Scheepvaarthuis. 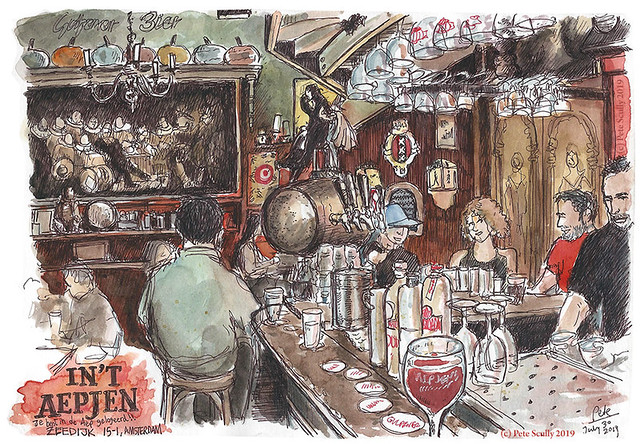 I really wanted to come back to In’t Aepjen and sketch another time, so a few days later when I was less heat-exhausted I returned for a couple of beers and to draw in more regular pen. I spoke again with the barman, and he told his story (reluctantly this time) to some female American visitors who wanted to know about it. I also chatted to a guy from Glasgow who was visiting on business (I think he was in the toilet paper business, but I couldn’t think of any good jokes, apart from “how do you make a bog roll? Push it down a hill” but I didn’t say that because one, it’s rubbish, two they might not call it bog roll in Scotland, that might be a London thing, and three he might have actually explained to me how you do make bog roll, what with him being in the bog roll industry). So I just told him the story about “je bent in de aep gelogeerd.” It’s a conversation piece alright. I might start making up similar stories in London pubs. “Oh yes, the Olde Cheddar Cheese, that gave rise to the popular phrase “to get the cheese stuck on your elbow”, which basically means to be confused about what time it is,” or if I’m in the Good Mixer, “ah well this is where the very common phrase “you have been good-mixed up” which is when you can’t find your wallet but a stranger buys you a beer and a round for the whole bar”, or actually I’m going to not think of any more now. I drew as much as I could, adding a little bit of colour, but my eyesight wasn’t great and I wanted to sleep so I added the rest of the colour later on. These are a couple of my favourite of my many bar-sketches, and if you’re in Amsterdam you should look for this place, there is lots to see and sketch, and the atmosphere is good. Just don’t get fucked up by the monkey.