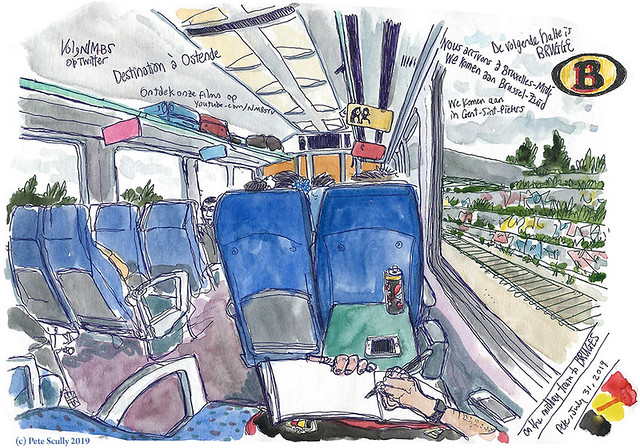 We leave these depressing times and return to the European travels of last summer, before social distancing was even imagined. In the last chapter we were all done with Amsterdam, that was all finished, now it was time to return to my favourite country: Belgium. Land of very slow queues but very quick access to beer and frites. This time I was returning with my family for some more touristy travels – no Charleroi, more Bruges. In fact we were staying in central Brussels, although due to the heatwave-related Thalys delay we got in later than expected, but still early enough for an evening stroll around the Grand Place, Mannakin Pis, the chocolate shops, the waffle stands and of course the friteries. Belgian frites are just the best. The next day though we took the train to Bruges (or Brugge as it’s properly called in Flemish). We walked up the steep hill to centraal station, stopping for a pain-au-chocolat (or “couques” as they call them here) on the way. The ticket machines in Belgian stations are not very good for foreign visitors with US credit cards, as they didn’t seem to take them, so we had to line up in the slow Belgian train station ticket office line. By the time we figured out a way to but tickets online instead we had reached the window. I love the train system in Belgium, it goes absolutely everywhere and runs a good service, but I forget that when I last used it I lived there and had one of those Belgo-passes I think they were called, where you just paid an amount and got ten train journeys. Ah well, tant-pis, we got where we needed to go in the end. I sketched on the train as the language switched from French to Flemish. The heatwave was over, now we had an overcast muggy sky. We arrived in Bruges ready to tourist. 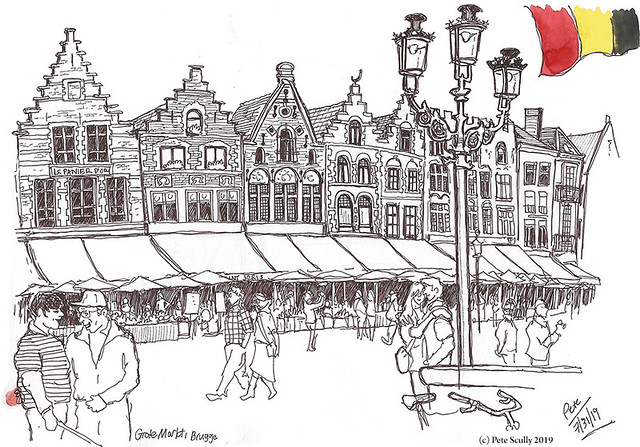 I last went to Bruges in, whew, either 1999 or 2000 and was pleased to see that it is still a medieval city. Above is a sketch of the Grote Markt. Bruges was busy as usual, as always expected, and we even took a horse-drawn carriage around the city. I love all the old architecture and lanes and canals. The first time I was here all those years ago it was Christmas-time and there was a lovely Christmas market in this square. I decided not to colour in (since I was touristing with family) but I packed a lot in while my wife and son explored. Below is the incredibly large Belfort on the other side of the Grote Markt. It reminded me a bit of Orthanc, the large tower of Isengard where Saruman lived, with Gandalf on the roof ready to jump onto the back of a massive eagle. 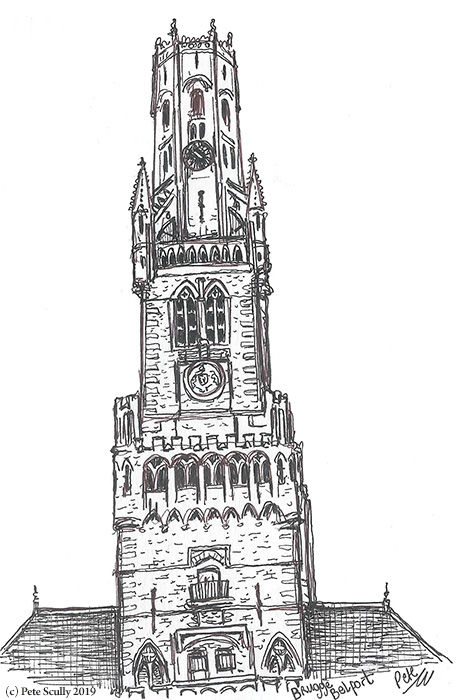 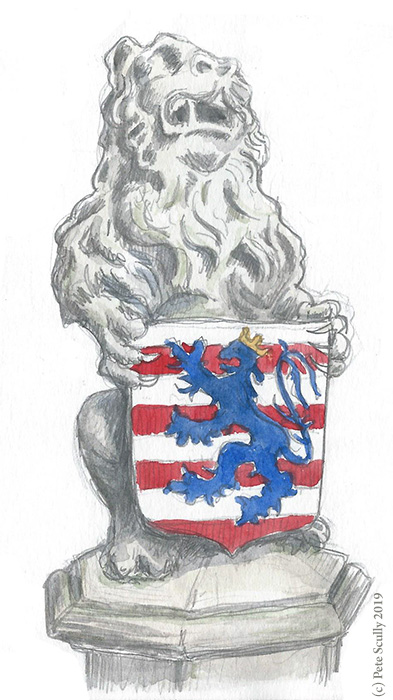 We had lunch before all of our touristing in a nice little restaurant called De Zevende Hemel. There I ate my moules. I’m a big fan of moules. These ones were nice, but just nice. The trappis beer I had with it was delicious, La Trappe.

We got the train back to Brussels, and while the family got an early night, I went out for one last sketch of the day. I was looking for a historic cafe called A La Becasse. I had never been there before, and it was hidden away down an alley near the Grand Place. There I had a table to myself in the corner, a Hoegaarden Grand Cru, and just enough time before closing to get a lot drawn. I actually sketched this paint first for the most part, adding in the ink afterwards. There were a few American tourists in here talking, but it wasn’t particularly busy. They have a lot of beers on the menu, as a good Belgian ‘estaminet’ should (that is another word for tavern), and dates back to 1877. Here’s their website: https://alabecasse.be/en. Every time I saw the name, I kept thinking “…the lady loves Milk Tray”. But then that made me think of The Lady In Red again, get that song out of my head. 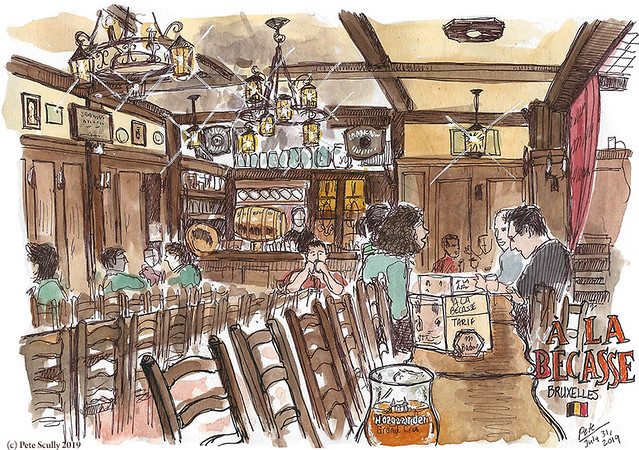 If that wasn’t enough, I couldn’t help getting one last portion of late night frites from Fritland, near the Bourse, whose frites I absolutely love. Filthy delicious. Even seeing this picture makes me so hungry, and just want to get back to Belgium. 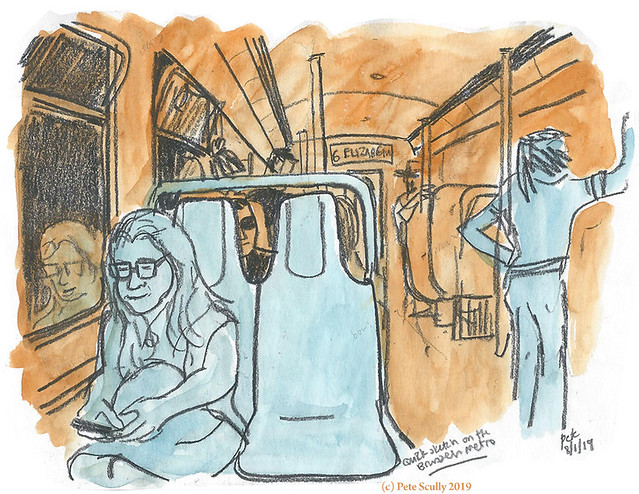 The next day we touristed some more (I did a quick sketch on the metro, above), going up to the Atomium (I don’t know if you are allowed to show that online, it was always banned, but it’s a massive great big sodding metal building you can see for miles). I don’t really love the Atomium, because it reminds me of being bored, when I lived in Belgium and I would sometimes come here, not all that interesting, and go back, or maybe I would get the tram that goes all around the city to reach here, so I would have somewhere to read a book and watch the city go by, and I never liked reaching the destination. Still, we all had fun walking in the parks around it, and (food photo alert) we got waffles from a waffle truck, simple no-nonsense waffles with a little bit of sugar on them, none of that fancy chocolate and kiwi fruit stuff for the tourists, and we all agreed it was the best waffle we had ever tasted. Cheap and cheerful, no pretensions, the most Belgian thing ever.

That isn’t of course to say Belgian doesn’t do fancy. When it does fancy it can outdo all of you. I’m talking about chocolate. There are some crazy super fine chocolatiers in Brussels, but maybe the nicest ones we had were at Pierre Marcolini (at least as recommended to me by my Belgian friends, and they would know). This is the real fancy stuff. Not cheap either, but worth it. I got some for my wife as a souvenir. We got some others from places such as Mary and Neuhaus, but we ended up leaving them for family in London. I tell you what, all this talk of Belgium makes me very hungry. 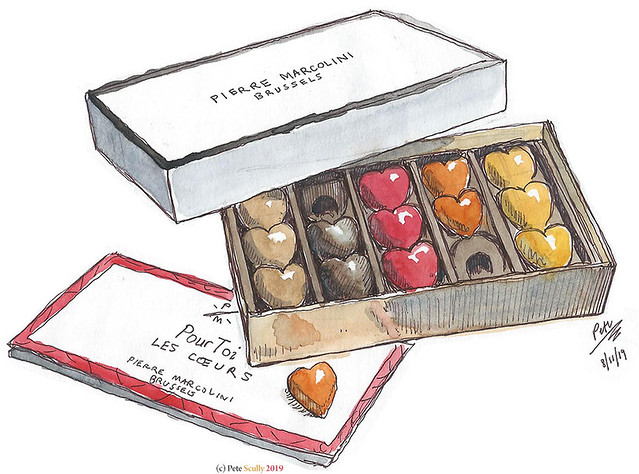 And then we left Belgium on yet another train, this time headed to France and our first ever trip to Disneyland Paris…