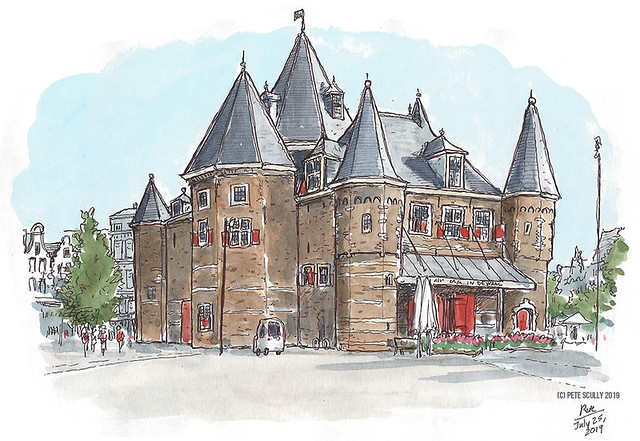 First workshop day of the Urban Sketching Symposium! We got a big bag of goodies this year, loads of paints and pens and sketchbooks. I still have goodies from the first symposium in my art cupboard. This year symposium attendees all got bright red bags to carry our gear, which also made it easy to spot the other symposium people. The first thing I drew in the morning was the castle-like building called ‘Waag’, in the Niewmaarkt. I think everyone sketched this. It sits there nice and sketchable. I drew it from the most obvious angle. Perhaps I should have sat closer and made more of an effort, but I was in a hurry, I needed to get to my first workshop: “Amsterdam Rooftops” with the very nice Hugo Costa. I met Hugo in Porto, so was eager to take one of his workshops, and he really had an advantage over the other workshops, in that we were going to be looking out over the top of the city, but also sketching in a cool air-conditioned rooftop restaurant, “Blue”. I drew him introducing the workshop below. 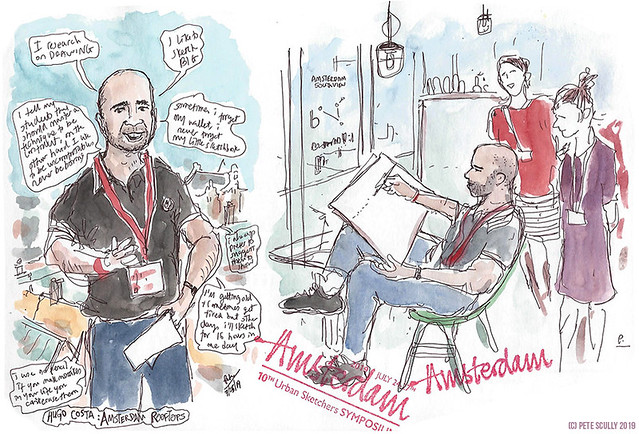 For the class we had to bring large sketchpads, like A3 size, which of course is not my usual thing but I wanted to give it a go. Definitely enjoy attacking something so big and detailed on a large piece of paper. I decided against adding colour, but just added a bit of shade. I took this photo of it. I submitted this into the end-of-symposium auction, and it sold! Most of all, I enjoyed observing Amsterdam from above. There is something so peaceful about sitting above a city, counting the spires, watching it stretch to the horizon. The Netherlands is a very flat country. When I was a kid I had a map of Amsterdam on my wall, and I loved how the canal rings curved around the city centre. It’s amazing I have not spent that much time in Amsterdam in my life, but I have never really spent much time in many of the places I used to read all about when I was a kid (I had a map of Sydney too, never been to Australia, as well as those little Berlitz books about Hong Kong, New Zealand, Norway and the Rhine Valley, none of which I’ve been to. YET.). 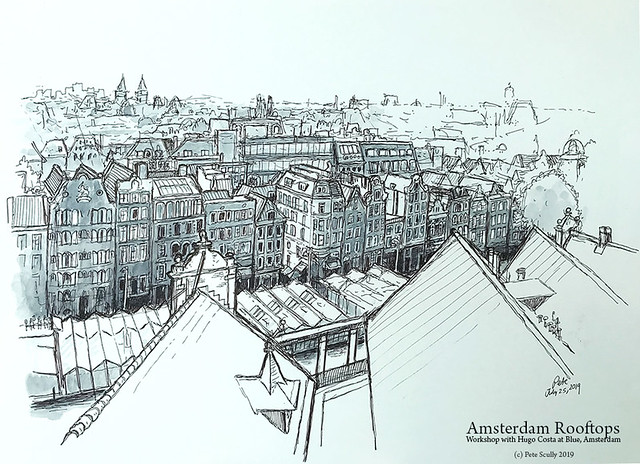 This is one of my favourite photos from the symposium, the various workshop attendees from all over the world all huddled together in an elevator going up to Blue, all ready to sketch. I made some silly joke about “watch out for pickpockets!”. This was a really nice workshop experience, we had some nice conversations. 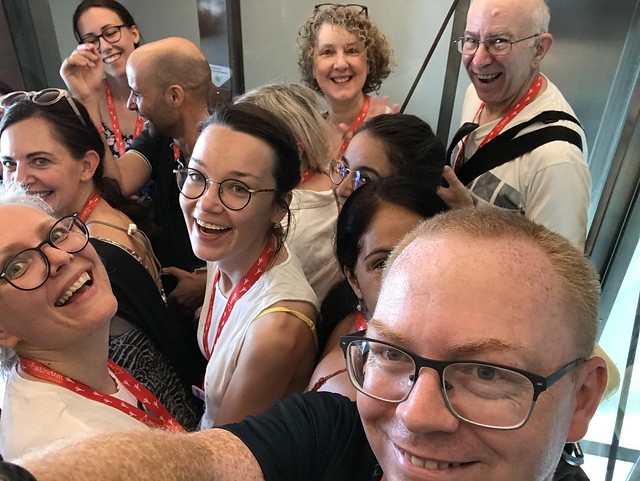 Here is Hugo taking a look at some of the sketches. 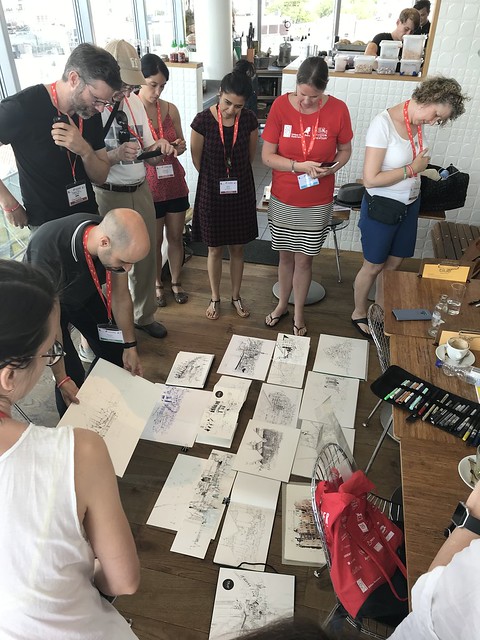 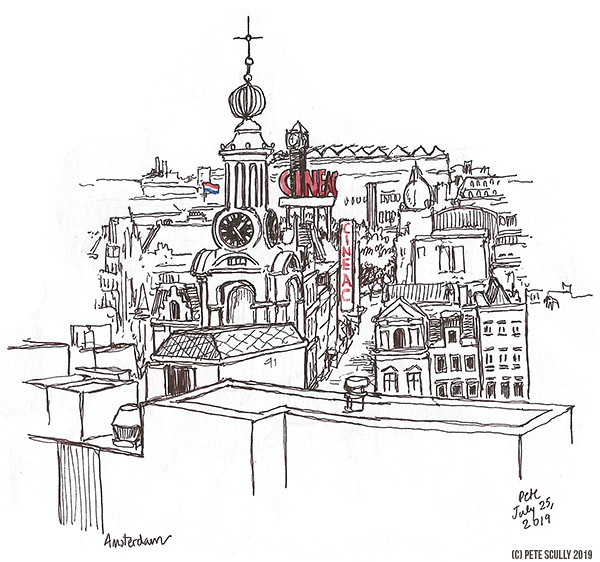 After the workshop many of us stayed for lunch. I caught up with Daniel Green, always nice to chat with him, and sketched the view looking down what I think is Regulierbreestraat. This is a city I would love to explore so much of, maybe in a slightly less busy time of year (whenever that is!).

After lunch I headed back to the hotel and then went out to see something I just had to see – the Ajax Arena. Well it’s called the Johan Cruijff arena now after the most famous footballing son of Holland. I wanted to go there because I love Dutch football (well, I like it) and have always admired Ajax, but maybe the real reason is that my team Tottenham knocked Ajax out of the Champions League semi-final in a most dramatic last-minute way in 2019, and I wanted to wear my emerald-green Spurs top there, just for a laugh. I got a few comments in the club shop, “oh you can’t wear that here.” 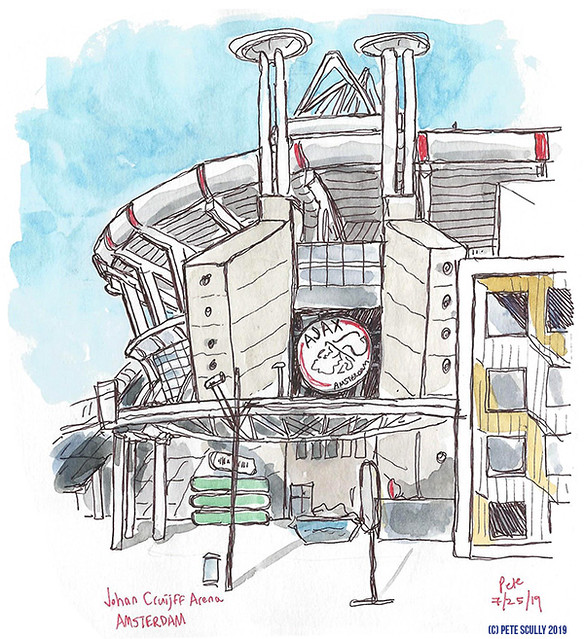 I didn’t get to go inside the stadium but that is ok, I just sketched outside. I did meet one Ajax fan though who was not a fan of Tottenham, let’s say. I was standing outside a restaurant next to the stadium which was called “Burger Bitch” (one of the burgers was called “That’s a huge bitch”) and he came dashing out to tell me, no you cannot wear that Tottenham shirt here. Not so much for us beating them, which he blamed completely on Ajax, more for how he and other Ajax fans were treated by the police when they visited our new stadium in the first leg (he never got to see the game because some English hooligans attacked them, and so the police just took them away and sent them to Leicester Square, no game for them). I felt bad for the guy, we had a good chat about footy, but yeah at first I thought he might chase me away. He told me of his other stories about traveling with the Ajax, such as when they were in Turin and the Italian ultras of Juventus would attack them with knives, and a guy he knows got one of those infamous knives in the buttock that are popular with Italian calcio hooligans. I had heard of this being a thing. He told me that was the worst thing because they cannot sit. Actually he might have said “cannot shit”, it was hard to tell the way the Dutch sometimes say their “s”, but either way not a nice injury to have. I didn’t tell him about when my brother in law fought against Ajax fans in the early 80s on a canal boat in Amsterdam and he was attacked by a guy with a samurai sword and had to jump ship. I’ve always wondered about that story. Anyway after all this fun chat I went back into central Amsterdam, and decided I might not wear my Tottenham shirt out to the pub that evening.

“What do they call a whopper?” “I dunno I didn’t go into Burger King”

A couple of photos. I was particularly proud of my quip when I saw the picture of Danny Blind holding hands with a young Daley Blind, two generations of Ajax player, when I said “D. Blind leading D. Blind”. But nobody was there to hear or care. And there it is, Burger Bitch, to prove it’s a real actual place. 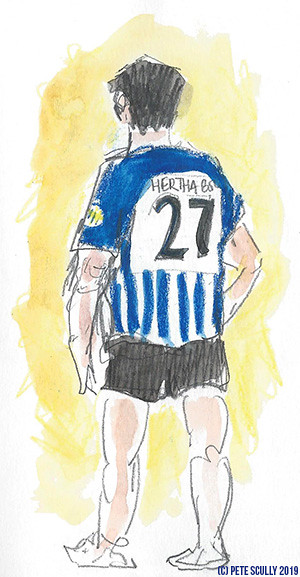 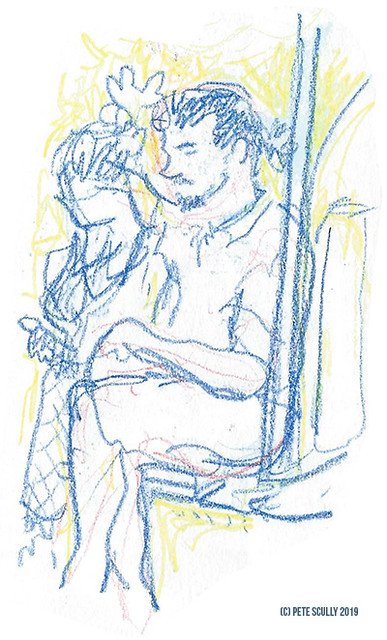 I had to wait ages for the metro. The station at the Arena was absolutely packed, largely with people traveling home from work, but the heatwave was causing more delays I think. I sketched a little. When I got back, I rested for a while at the hotel before getting back to the sketching job. I drew the Zuiderkirk from the banks of the Zuiderkerk from Kloveniersburgwal canal… 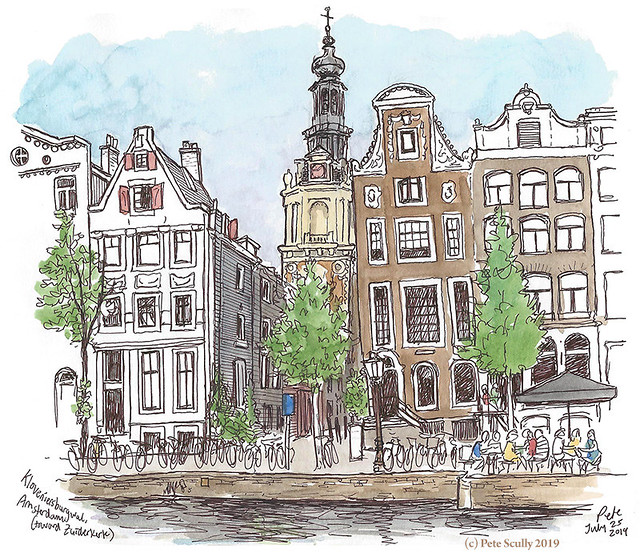 …before drawing the sunset at the Amstelhoeck. I then spent the rest of the evening drinking beer and hanging out with sketching buddies, another very fun evening. A very hot but very productive day. The next day was even hotter… 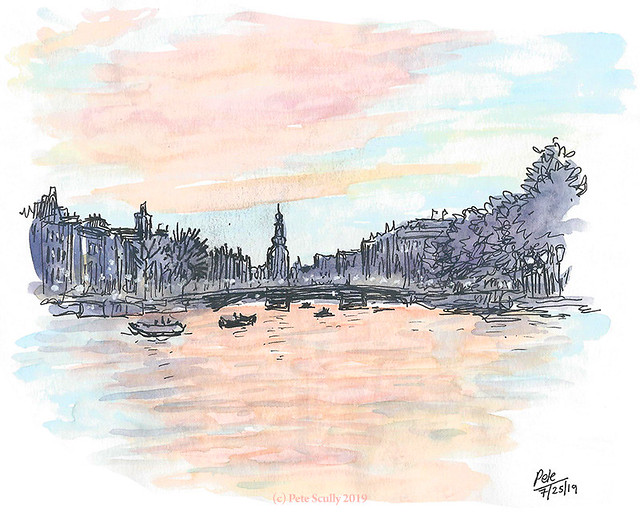