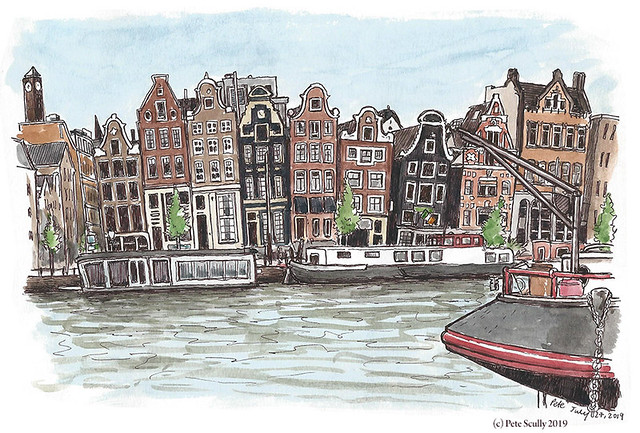 Moving on to the next day and the final day of the Symposium, I woke up Saturday morning definitely feeling the heat exhaustion. I decided to skip my final workshop (I did go and let them know so they wouldn’t be waiting for me) and find a spot to sketch peacefully. I hadn’t yet drawn the dancing houses along the banks of the Amstel from Groenburgwal, so I found a nice bench and drew away. I met another sketcher doing the same. It was quiet, the weekend heat had not yet started cranking up, and my stress-headache was clearing up immediately. I didn’t need to be in a class, stopping and starting and rushing, being “on”, I needed to be in “breathe-in, breathe-out, sketch” mode. It worked. I had met Lapin earlier the morning, and I was going to go and sketch with them (as it turns out he and Gerard and co went to sketch my hotel), but I decided to draw the Dancing Houses. They are impressive. Many houses seem to ‘dance’ in Amsterdam, leaning this way or that – my perspective tip of following the windows to find the vanishing point on the horizon doesn’t work as well here, where the windows follow lines more suited to more Marty Feldman’s binoculars (Young Frankenstein reference). Crooked buildings are fun to draw. By the way I did overhear one sketch instructor scoff at counting the windows on houses in Amsterdam, but counting the windows really helped the composition of each element, and also helps get the scale right. Besides, in Amsterdam they are usually three windows across as a rule. The patchwork nature of the architecture breaks up the monotony you find in many cities, it’s just so fun to draw. Looking back I probably could have had the energy to do some more group sketching and plough on, be a bit more sociable and awake, but mental health came first and I look at this sketch and immediately I feel more relaxed. Breathe in, breathe out, sketch. 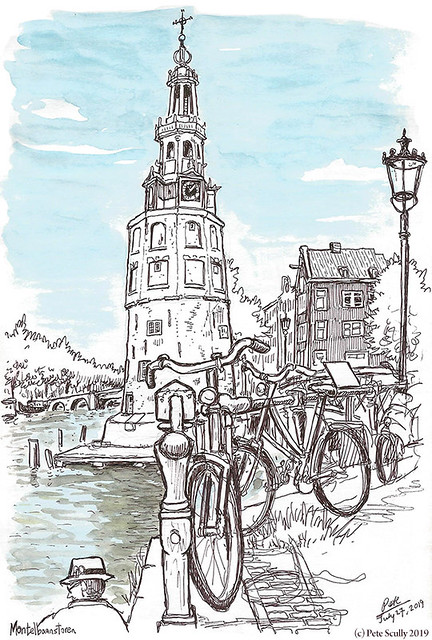 I wandered about a bit more, bumping into the occasional sketching friend, I met Nina Johansson (long term urban sketch idol of mine since the beginning) teaching a class nearby here, the tall Montelbaanstoren. It was pretty peaceful over here too, a couple of blocks from my hotel, in fact the workshop I had skipped was being taught close by, but I decided not to join late. I sat by the canal and drew the tower as best I could, with a bike in the foreground. I was going to add full colour, but stopped at the blues, it just felt right for the relaxed mood.

After doing a few sketches of the hotel (I posted those already), I wandered over to Niewmaarkt to enjoy one of my favourite discoveries in Amsterdam – poffertjes. Little mini pancakes, from a friendly guy called Tony Benson. I spoke with Tony and a woman who was with him, we talked about Belgian footballers (maybe because I was wearing my Belgian shirt again), she was really inot Eden Hazard and asked who my favourite Belgian player was (Super Jan Vertonghen obviously!). The poffertjes were small but delicious. I could eat some of those now.

In the afternoon, there would be another sketchwalk, over near the NEMO center, culminating in a huge group photo (the ones I usually miss at every symposium), and then the final reception over at the Muziekgebouw. I was going to meet up with everyone there, but at the hotel I realized I really needed more rest, not more rushing around in the heat. Here’s how I rested:

I also rested by spending an hour or so in the amazing blue-tiled pool in the hotel’s basement, and relaxing in the hot-tub. Best decision I ever made. Matt Brehm was right, you don’t have to draw.
The sketchwalk was nice, and although I turned up too late for any sketching, I did meet up with a lot people I had not seen during the symposium. Many of the local groups got together for their local group photos – I am one of the Californians, but I wasn’t quick enough to get a photo with them. I did at least make the final group photo, but there are so many people in the picture that I obviously can’t be spotted, even with my bright red Belgium 1984 shirt. Actually though, in this photo of the whole group (by Belgian friend and photographer Marc Van Liefferinge) I can be spotted near the middle of the back. Proof I made it there.

You know what, there are loads of sketches you can find from other symposium attendees, if you go to Flickr and search through the tag “amsterdam symposium“. Of course most people now just bounce them out on Instagram and so on too. There are a LOT of Amsterdam sketches to be found. I went over to the final reception (a very very long walk, I went with Mauro and Fabien, though Fabien stopped on the way for a beer and to wait for Gerard, they were not coming to the reception but actually driving back to Liège that night). At the reception I caught up with all the people I had not spoken to as much so far, such as Gabi, and Liz (we snuck up on Paul Wang and got our annual symposium pic of the three of us, guerilla-style), Elizabeth, James, and of course Rita, and did a little people sketching, but mostly chatting. I also got to meet Danny Gregory for the first time, he was there with all the Sketchbook Skool lot, that’s a big thing now. I had been a chapter in one of his books years ago, the one with my drawing of Vipins ont he cover, and we’d tried to arrange a video interview to go on his website but it was always dinnertime in my house and we never did it, so it was nice to finally meet. (Though I suspect I he didn’t remember who I was). I also met a number of people who I’ve since started following on Instagram, it’s what these whole events are about really. And then in the end, it was the gathering off for dinner, I went off with a big group of the usual sketchers, and we had a great evening. The best bit though was finishing off with some late night or early morning) car sketching. A bunch of us led by Lapin sat in a narrow street by a canal and drew a couple of classic Citroens. This is apparently a tradition at the Clermont Ferrand festival. My habit of sketching fire hydrants at 3am when I travel does not seem so odd now; these are my people. One of though people though, Hugo Costa, nearly fell in the canal when his stool broke – lucky escape! Here’s what I drew, and a photo of some of us sketching in the darkness of Amsterdam. 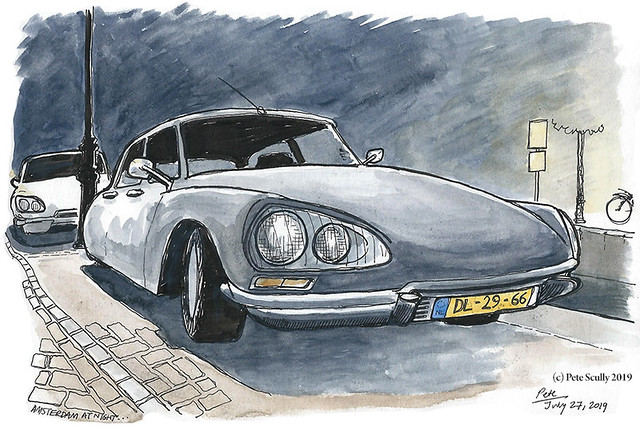 Now this little fire hydrant I actually drew at night on the first night in Amsterdam, but I’ve saved until now because why not. As for the blog post title, “Alleviating All Anxiety of Amsterdam”, I mean it says it all but seriously I might come back and change all these titles some day. 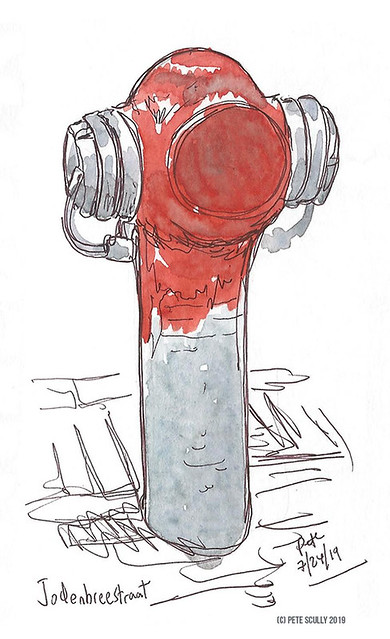 And that was it for another Symposium. I have more Amsterdam sketches to share here, plus a bit more Belgium, a bit of Disneyland Paris, a few from London, and then loads more of Davis, then some from Santa Monica, and Portland again, and Hawaii. But after this long day of relaxful sketching Citroens by lamplight, I had a well-earned lie-in on Sunday. After all the heat, there was a little rain coming, but so were my family.