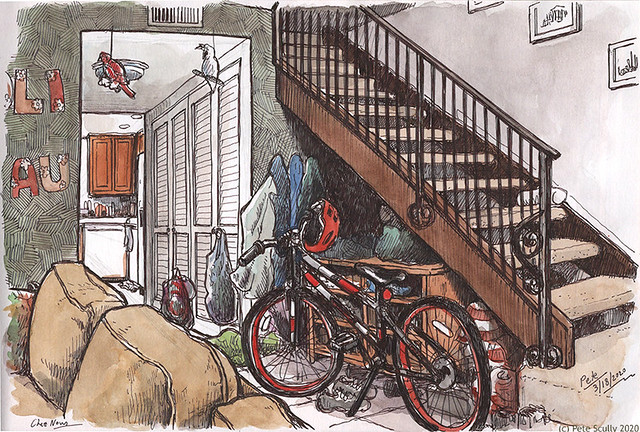 I really hate 2020, a lot. Like, it can honestly just bugger off. Well, this week Davis announced it will Shelter In Place, then this was followed a day later by an Order to Shelter In Place by Yolo County (yes our county is called Yolo), and this was then followed by the whole of California. So I started this week in the office, ready to pack up any moment, and was working from home by the middle of the week. Lots of meetings by Zoom. Because my wife is also working from home, it’s different from other times when I have worked from home like when I’ve been sick or looking after my son when he’s sick, because I can’t just have Revenge of the Sith on in the background or play David Bowie. It’s all an adjustment. I’ve not quite decided to turn on the camera in the Zoom meetings yet, until I can decide what my suitable background will be. I need to get a selection of clever sounding books and put them on a shelf behind me, either side of my head, so people will be like, wow, maybe he is clever. I have a lot of language books, and the Riverside Chaucer, or maybe I should put my own books – speaking of which, my most recent book was published in CHINESE this week! They sent me a copy. Or perhaps I’ll just put up one of my vintage World Cup posters, that would look more like me. Anyway, now that the whole world of urban sketchers it seems are sketching their houses, I thought it about time I did the same, and drew the living room last weekend. This week I drew a few more. Above, the stairs, drawn late at night while watching videos on YouTube about Star Wars (wow, there’s a lot of utter crap out there). The hanging birds and letters on the wall are from a Happy Birthday message I made for my wife, in Hawaiian. She really likes Hawaii. We would not mind being stuck there right now. There’s my son’s bike, he’s new to riding it, but he loves it, it’s just now with social distancing it’s harder to meet up with friends. And of course, despite living in Davis, the bike capital of America, I still can’t really draw a bike. I don’t care; there’s a pandemic on. 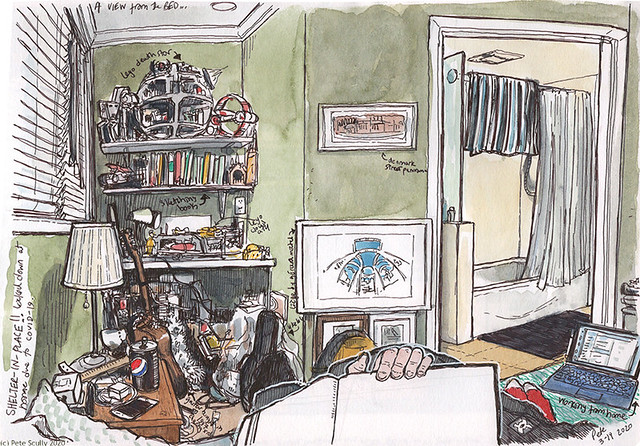 Working from home means I can go to different rooms in the house and work. While I do have a nice computer at a desk downstairs, I can also take the laptop upstairs and do exactly the same thing. As it slowed down one afternoon I sat in the bedroom, answering emails and approving this and that, listened to podcasts, and then decided I needed to draw the bedroom. I don;t think I ever have before, the lair of Lego and piles of things, framed pictures and clothes, musical instruments and boxes of records, and all the shoulder bags I no longer use but don’t need to get rid of yet (I just brought one out of retirement that I got in 2007, it fits my new iPad into it so it’s back on the team). That large framed drawing in the middle, that is actually a print of an extreme panoramic drawing from Liège that Gérard Michel gave me way back in 2011. I keep meaning to bring that one into work, it’s too big for that piece of wall so it rests on top of other frames for now. I also have one of a 360 degree drawing from the Montagne de Bueren staircase that he gave me, now I have visited that very place maybe that one should go up here too, I just need to frame it. 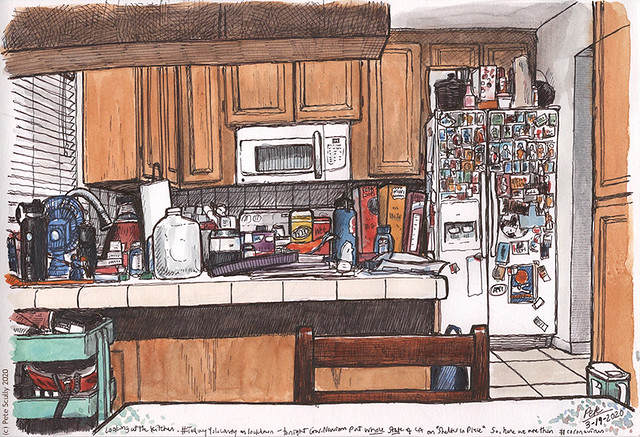 This is the kitchen, drawn from the dinner table, late at night while (again) listening to podcasts. One thing about working from home more now is that I snack more, which I had in the past year cut out completely (I lost 30 pounds in the last year, though I’ve put a couple back on now). I miss my walking to work, going to the gym after work, and I need to be a bit more dedicated to not snacking at home, but there’s a pandemic on, and the stress of that makes me feel more hungry I think. In this Shelter in Place order though, we are allowed to go out running, as I did this morning, I went on a 2 mile run (I actually was supposed to do a 5k this morning, but the event was cancelled). Most of north Davis seemed to be out too, walking dogs, walking themselves, running, biking, throwing balls to each other, social-distancing I suppose, not really sheltering in place. In Spain they have been using drones to tell people to go home from the park! So, I will run while I can, and I never liked going near people anyway, but I’m not gonna lie, I’d really like to go and sketch at the pub. I’m going to miss that for a while.