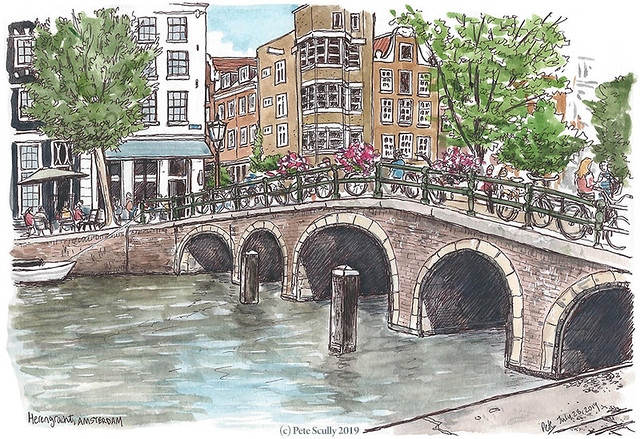 The Symposium finished, people went there separate ways, some together, some sticking about in Amsterdam, and I decided to have a lie in and a late start for a day of wandering and sketching some of the parts of the city I hadn’t explored much yet. My family were arriving in town later that day so I had a lot of time for some more sketching before the full-on tourist part of the trip started. The temperatures had dropped, the skies started to cloud up a little, it was still busy out but I finally had a bit of headspace. I walked over to Herengracht and sat down by the canal to draw this bridge. I saw a few other sketchers here and there, nobody I knew, but we know we’re all in the sketching family so there’s usually a nod of respect. 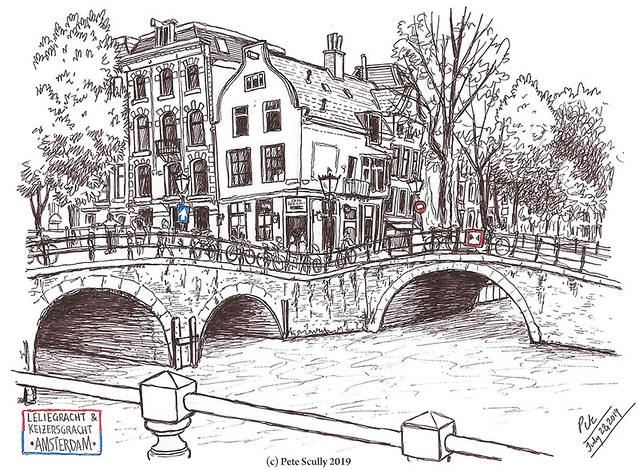 I really like this particular junction at the corner of Leliegracht and Keizersgracht. Amsterdam has a lot of charm. I think I didn’t love Amsterdam, overall, it felt a little stressful with the tight sidewalks and cyclists, the tourists and the partygoers, and the dirt, far too many cigarette butts on the ground, but there is no denying Amsterdam is still beautiful, and so unlike many other cities. The first time I came to Amsterdam in the summer of 1998 I had the same impression, though I had also spent all night on a train from Berlin. There is so much to search though, no shortage of places to explore. I mooched around bookshops, tried samples in cheese shops, got lost in alleys and small squares, or as lost as my map-enable apple watch would let me. This side of the city west of Damrak is full of postcard views and long canal vistas. I knew I’d come back so I wandered back toward the Centraal Station area (perhaps my least favourite station area), had a look around the football-themed store Copa (perhaps my most favourite store in Amsterdam), buying two pairs of socks, one which features Diego Maradona doing the ‘Hand of God’ in 1986, and Zidane headbutting Materazzi in the 2006 world cup final, and went to meet up with my family. The next couple of days here would be doing more of the tourist stuff – a boat trip around the canals, Anne Frank’s house, the Van Gogh Museum, and a change of hotel. 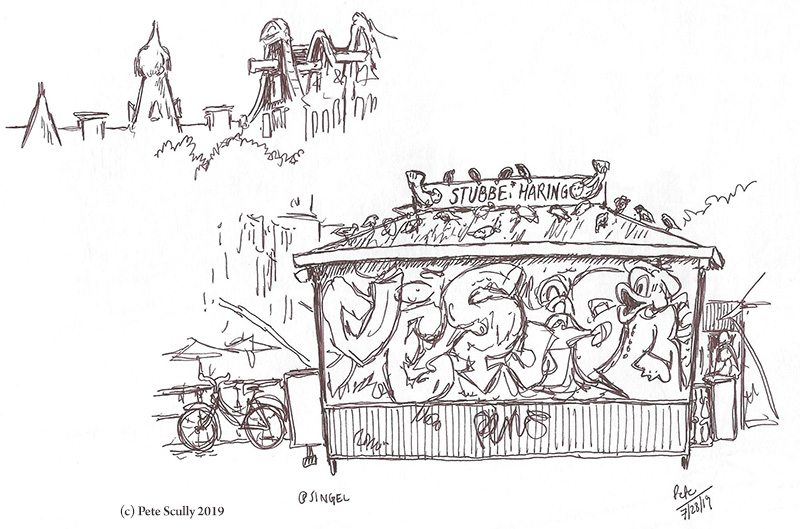 Here are a couple of sketches I did near the Centraal station. Teh lamp-post thing below looks like some kind of city warning against public drunkenness. 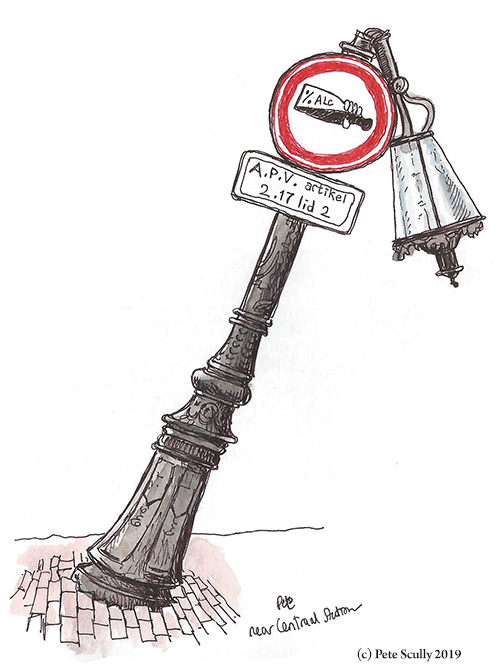 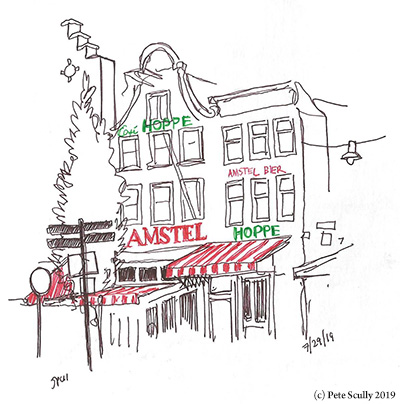 I didn’t sketch as much once the family arrived, just a few here and there, I think I had earned the break. Above is a quick one I drew at Spui while eating Flemish Frites (see below, they were delicious). I can’t reiterate how much I love the frites over here, they do taste delicious.

I did try to do a quick sketch of the tall houses at Damrak one evening, just to mess about with some of the new materials we were given at the symposium.Not my usueal sketching but fun to mess about. 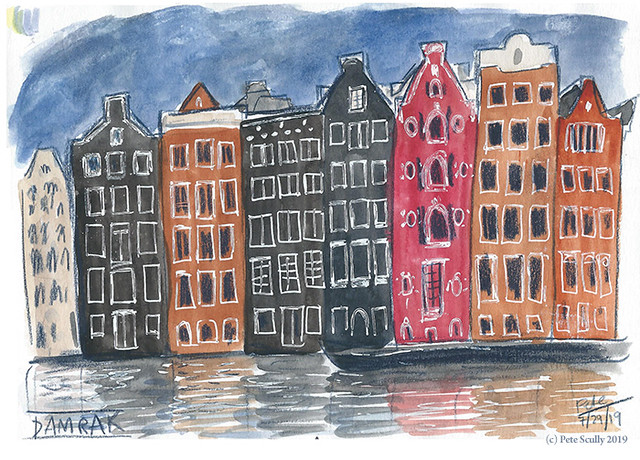 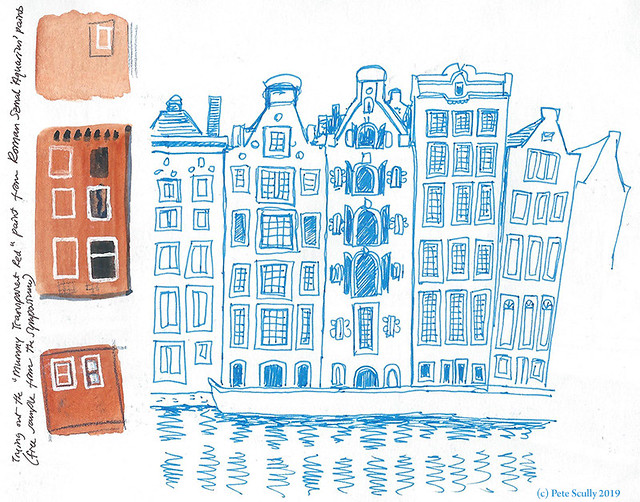 Below, I drank a beer called “Bastaard” by Hertog Jan while we had an Indonesian meal at Kantjil by Spui. Sketching with pencil can get messy as you can see by the filthy page. 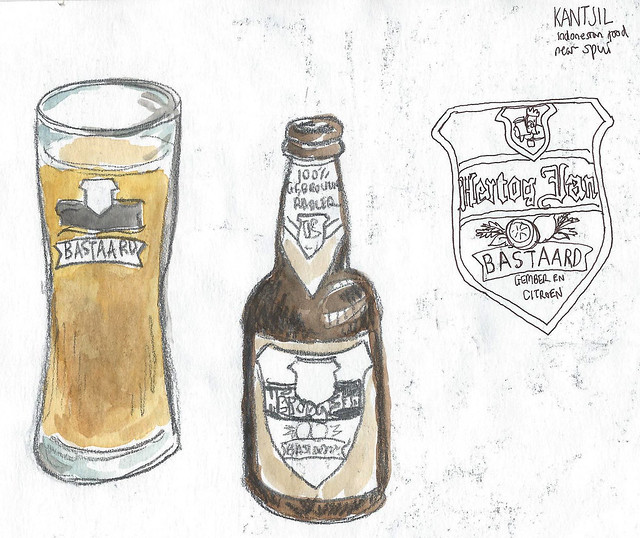 And here is one of the little tiny toy cars they have here in Amsterdam to get around the super narrow streets. I never did sketch one; I asked Lapin who loves to sketch cars if he was going to add one to his collection, but even he said no, that’s no car. Look at it, it’s like something from Richard Scarry. I expected another one to come along looking like a big carved out apple , and a pencil and a banana.

I did change hotels when my family arrived, moving from the Grand Amrâth to the Doubletree, which my wife had booked (she got a really good deal). It was a nice hotel for sure, very modern, with amazing views over the city, but zero of the character of the Grand Amrâth. But these views! I had to sketch it. I did go up to the rooftop lounge to look over the city, but I did not want to sketch up there, it wasn’t really my thing to hang out there. The Doubletree hotel is right across the canal from the Grand Amrâth so we could see the whole building in all its glory from across the water, and I would get up for a run past it, and some of that lovely fresh juice from a nearby supermarket. I miss all the nice juices and foods from Holland. I would like to come back and explore more of the Netherlands. The Dutch people I met at the symposium came from all over and there are so many places I know not that much about. Aaargh, the world is so big, there is so much I want to see before I’m done. I want to see it all, and sketch it all. 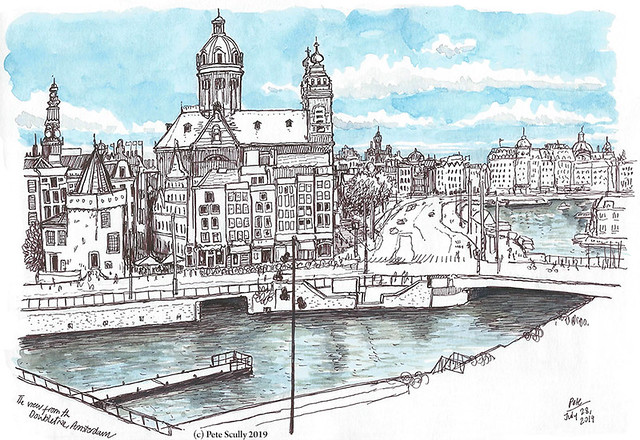 But I was done with Amsterdam, we all were. Time to move on, time to go back to Belgium and eat some more frites and waffles. But the heatwave wasn’t done with us yet. We went to get our Thalys but of course, there were cancellations and delays, hung over from the travel chaos a week before. We waited and waited, a few hours with hundreds of others, until in the end a Thalys came and everyone was lucky to get on. But we had first class reservations (a good call as it turns out, for very little more cost) and so I was given a couple of free Belgian beers (a couple of cans of Leffe Blonde) in our carriage for the journey. It was all a bit stressful at the time, but I’m usually travel lucky, it all works out in the end. When life gives you lemons, draw in your sketchbook and be patient, and life will eventually give you Leffe. Onwards to Brussels! 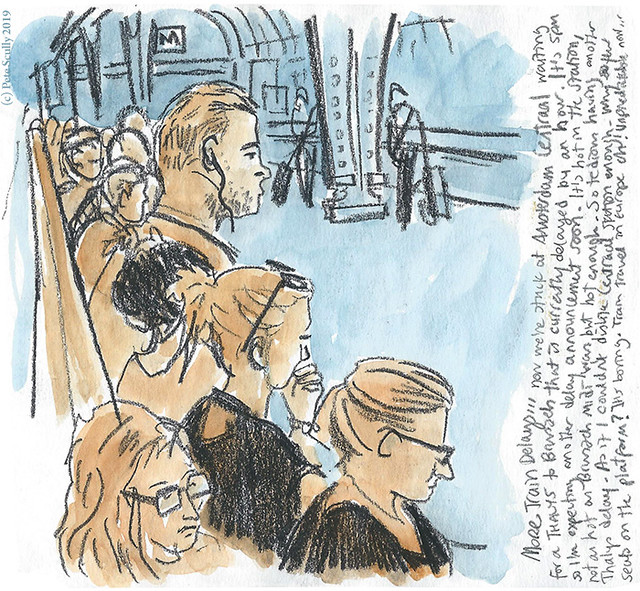