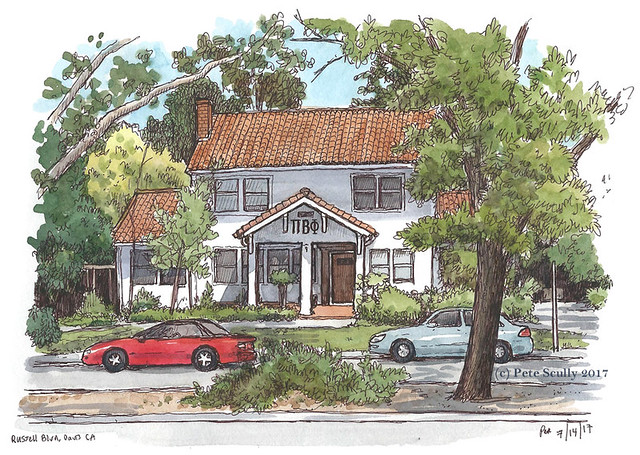 Continuing the intermission from Italy posting, here is one from the edge of UC Davis, a sorernity house on Russell Blvd. One of many; this area is called “Frat Row”. This one is “Pi Beta Phi” which is you all know is short for “Pirates Be-taking Philosophy” which yes I know makes no sense, but I know nothing about the origins of the phrase and don’t want to assume. I assume it is some sort of in-joke, like “Honi Soit Qui Mal Y Pense”, the famous slogan of the Knights of the Garter, which I’m sure they never intended to be their permanent slogan, just a bit of a laugh, like their name, Knights of the Garter. The origins of names and phrases are often lost in the swirling sands of history. Ok before I turn this post into another inevitable meaningless collection of weak jokes and untrue etymologies (“sweetheart, that could be the name of my autobiography”), let’s just get back to the subject matter. There are lots of these houses just off campus, but as someone who didn’t go to college here this whole ‘Greek Life’ is alien to me. When I was at uni I went to the New Globe pub in Mile End with my fellow drama students and got drunk on halves, and that was about it really. Fratorities and Sorernities are not really a thing there at all. The first time I ever met ‘Frat Boys’ was when I spent a year in France teaching after I graduated. There were lots of American students in the city where I lived and I remember going to a party and some lads being described as ‘Frat Boys’. “Frat?” I would ask. “Is that an acronym, like ‘Fourteen Recipes About Thunderbirds’, or ‘Flying Rabbits Are Terrifying’ or something?” (I was not as good at coming up with funny acronyms back then) “No,” they would say. “It doesn’t mean anything. It just means they drink loads, are usually white, and drink loads.” I think that was the description I was given, it was a long time ago and I didn’t really understand it. They might have said more but they definitely said that. I didn’t think they drank more than British binge-students.  I have snippets of very odd conversations with young Americans while living in France, like the person who asked me, upon hearing that I was from London, if I liked “London Broil”. Again I didn’t know what that was (I still don’t by the way). What I got was that “Frat Boy” just means a certain recognizable type. They might not even be in a “Frat” (and I didn’t learn what that was until I after actually moved to America) (and then spent years deliberately saying “Fratority” and “Sorernity” just to see if anyone would correct me, then I would laugh). It’s an expression I hear very often, “They’re just a bunch of Frat Boys,” “This place is full of Frat Boys”, “Get off of my lawn, Frat Boys”. I’m focusing very much on the Frat Boys here but not on the Sorority Girls. You don’t shorten that by the way, you say the whole thing. The rule of thumb is if you can pronounce the whole word ‘sorority’, then you are sober enough to drive home. I don’t know much about these societies other than what I’ve been told, about how they do ‘Rushes’ where you have to wear a different dress every day for a month, and say “ew” a lot. Like I say, it’s all alien to me. My wife did make me watch “Legally Blonde” years ago, but it was because I lost a bet (if I had won she would have had to watch “Young Einstein”, to this day she still hasn’t had the pleasure of seeing that amazing and not ridiculous at all movie). In “Legally Blonde” they make references to some sorority or other and that is pretty much all I know. So, I decided to do a little research on this particular sorority. When I say ‘a little research’ I mean I googled it and looked at the Davis Wiki page. Apparently (and this is cool) Pi Beta Phi was the first “national secret college society of women”, founded in 1867 in Monmouth Illinois (as “I.C. Sorosis”, and we can all agree the Greek letter name sounds a lot better). This means they are 150 years old! Notable Pi Beta Phi people are Jennifer Garner and Faye Dunaway. Not from the Davis chapter of course, but it’s a national organization. So there you have it. It also definitely has nothing to do with Pirates Be-taking Philosophy.