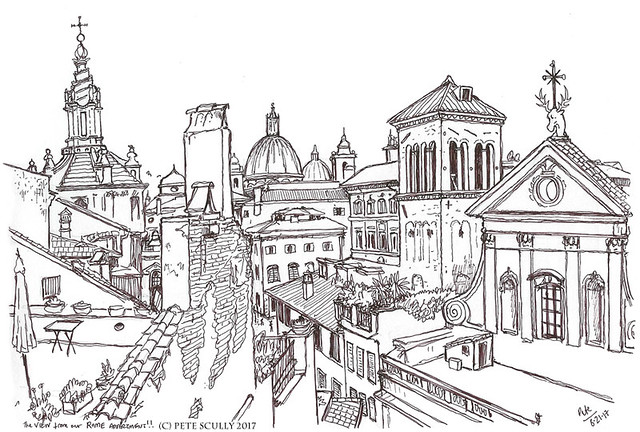 This was the view from our Rome apartment living room. I’m not exaggerating, this isn’t a collage, I’m not condensing a lot of different spires and domes into one, this was the actual view. I left this uncoloured because it was actually my favourite sketch in Rome, and definitely my favosuite view in Rome. I could look out of that window all day. Except for the fact I wanted to look around the city itself. The dome in the distance, behind the bigger dome, that is the Vatican. The church with the stag on top is the Basilica di Sant’ Eustachio. The stag’s head is a reference to St. Eustace, who was a roman general back in the 2nd century who was out hunting when he saw a stag with a crucifix in its horns, and he saw this as a sign and converted to Christianity. I had to look that up because I did wonder what it was for. It looks cool though. The most dramatic steeple though is the baroque church of Sant’Ivo alla Sapienza, that spiraling corkscrew tower on the left hand side. It’s so eye-catching. The church was designed by the legendary architect Francesco Borromini between 1642-1660.

Our apartment on Via Della Palombella was pretty big, and the owner was really nice; I’d definitely stay there again. The only thing, those stairs! Four huge very steep flights, over 120 steps I think my son said it was, so I got a good work-out every day. I went up and down a lot, to go sketching in the morning, come back with breakfast from the nearby Caffe Sant-Eustachio, back again after sightseeing, then again after dinner and if I went for an evening stroll then I would be up them again. I got my 10,000 steps in before lunchtime! But look at that view. That view is worth every step, and then some. Below I sketched the view at sunset, which was stunning to say the least. 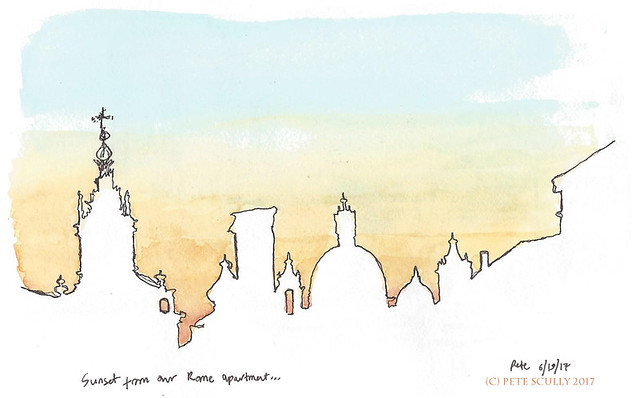 And from the bedroom window is the dome of the Pantheon!