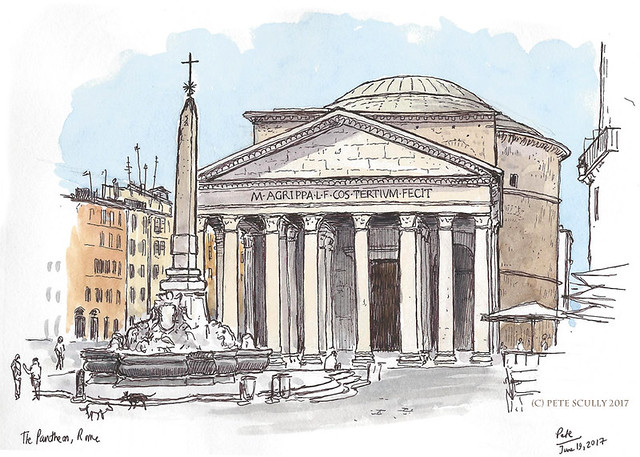 I expected more cats. I had never been to Rome before, but I had always heard that there were cats everywhere, lounging among the ruins and darting between the columns. I remember in fact my first trip to Venice, seeing lots of cats around the doorways of churches, presumably looking for the church mice. But I didn’t see any, not a single one. I must have spent all my time admiring all the amazing ancient architecture or paranoidly perusing all the people as potential pickpickets, or maybe some alternative alliterative activity, but I found far fewer felines than foreseen. Funny, huh. I did see two dogs though, who ended up in this sketch of the Pantheon, which may be one of the most amazingly built and well-preserved building s of the ancient world, and it was right next to my apartment. I could see the top of the dome from my bedroom window. The Pantheon – which translates to “all the gods” – was built by the Romans around 125 AD, on top of a previous Pantheon which was destroyed by fire. The reason it is in such great shape and is so well preserved from ancient times is that is has been in pretty much continual use since then. After the Roman Empire became Christian, this great pantheon to all the Roman gods and goddesses – Jupiter, Mars, Juno, and so on – was eventually converted and consecrated into a church. The ancient dome itself, however, is one of my favourite pieces of architecture. The Romans were experts at concrete to a level that we have been barely able to match since, and they built this massive and perfect structure out of an especially light but strong mixture.  It is still the largest unreinforced concrete dome in the world.

I like to sketch early in the morning on my trips to other countries, especially in tourist-big cities like Rome. So I woke up before la famiglia Scully, went out into the bright morning, and sketched the Pantheon from across the Piazza. Morning people were out and about, delivering goods to cafes and stores, jogging in groups and lycra, the occasional jetlagged tourist out with a camera and a coffee to go (don’t eat or drink on the steps of the fountain though, they will move you on), or locals out for a morning stroll, stopping to chat with other locals about the daily news, calcio, dogfood, I don’t know, however conversations work, I’m not good at them. This was one of those sketches that, yes, I enjoyed sketching this building, I’ve always wanted to go there, but what I remember is the experience more than worrying about the finished product. This sketch then becomes a record of me spending a little time watching Rome, seeing how it works. As you can see from my description I clearly understand it fully. (Shrugs shoulders). After this, I found a local cafe and brought lovely Italian pastries back up to la famiglia for breakfast. I love Italy in the mornings. 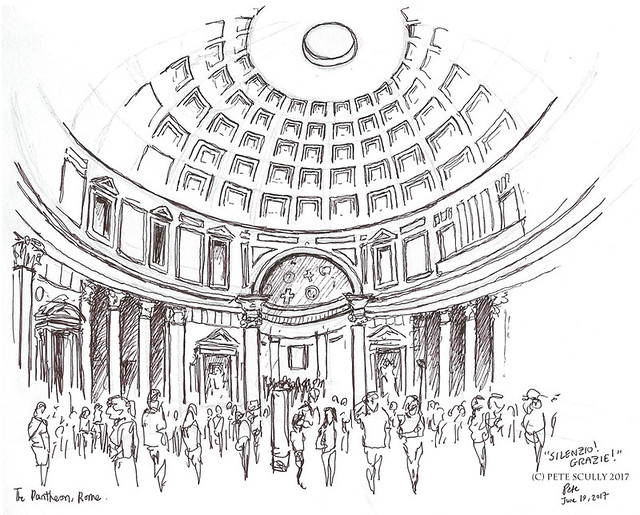 From the outside the Pantheon looks fairly small, ancient yes but otherwise not a particularly special building, but the interior is what really excites all the senses. Seeing that ancient dome from the inside, wit the large perfect oculus in the centre, pouring in light, is just as exhilarating as I expected. We went inside much later in the day, after the doors had opened. Outside tourists and locals mingled, street performers danced, a large choir sang “Fading Like A Flower” by Roxette (a song I never hear in America but used reminds me of those European trips I took as a teenager). We were tired from a morning spent in Ancient Rome (the Colosseum was incredible!) and an afternoon down at the Gladiator School outside the centre (by the way, families visiting Rome, do not bother with the Gladiator School, an immense waste of time and money). I had been preparing to sketch the inside of the Pantheon for a long time, studying how other sketchers had tackled this amazing building, even going as far as drawing lines on a sheet of plastic to help visualize things, but I forgot the plastic and it wouldn’t have helped anyway. Better to trust my own eyes. I did not do a complete sketch with all the details but stood there drawing while la famiglia walked around and looked at things. I would have liked to have added a touch of paint and shown the circle of light coming in from the oculus, but we were tired. It reminded me a little of the Crystal Chamber, the Great Conjunction, the Skeksis and the Mystics combining into the UrSkeks, and why does everything remind me of the Dark Crystal? Seriously. It was busy in there, but I did see some of the royal tombs, where a couple of the previous Italian kings are buried, as well as that of Queen Margherita of Savoy, after whom the Margherita pizza is named.  My son had one of those the night before, and I ate lots of them when I was a kid on my first trip to Spain. But best of all were the announcements telling people to be quiet. The noise level was getting a little too cavernous, so a very loud “SHHHHH!!!!!!” played over a speaker. Everyone stopped dead in their tracks, eyes open, utterly silent, and then the same voice spoke “SILENZIO!”, followed by a pause, and then “Grazie!” It was a surreal experience and everybody stayed silent for a good while after that. As the chatter slowly grew, a few more less scolding messages of “Silenzio” came out in various languages from time to time. Each time, the chatter grew again. I thought back to my old junior school dinner hall, when the noise of chattering kids would echo around those hard floors, and this one dinner lady with a massive booming voice would bang this huge metal spoon against a table, banging so hard that the spoon was all bent, shouting “SHUUUUTTUUUUPPP!!!!!!!” I guess Rome does things a little different than Burnt Oak, but I expect the sentiment is the same.