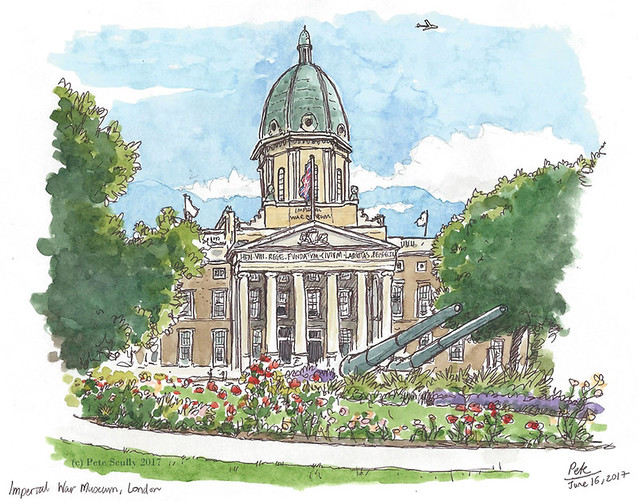 Last month we went back over to London for a few days ahead of our week in Italy, spending time with family and seeing friends. The London visits are more frequent than they used to be, but always seem shorter, never enough time to see everyone we want to see, go everywhere we want to go. We always pack a lot in though, and this time wanted to see some places we’d never been to. One of those was the Imperial War Museum. It’s in Lambeth, and had never appealed that much to me for some reason (because I’m a pacifist peacenik?) which is crazy because I love history, I love seeing old planes and tanks and uniforms and armoury, and I love old London buildings such as this one, which has an interesting history as the old Bethlem psychiatric hospital – aka ‘Bedlam’ (not the original Bedlam location mind you but still, interestingly historical). The grounds are lovely, and there were a lot of people out sketching as well which is always nice to see. I drew the scene above while my family were resting in the cafe. 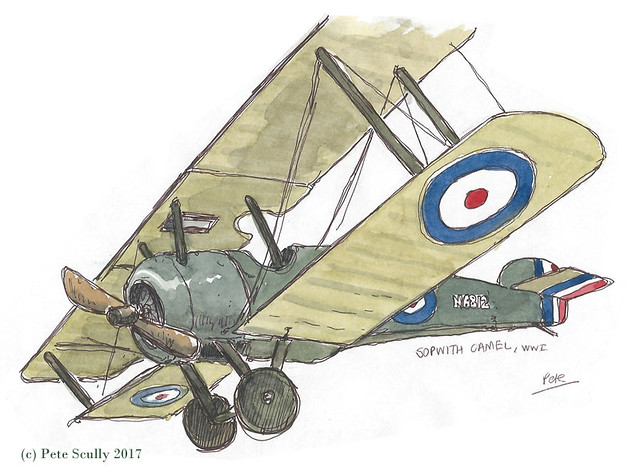 I didn’t do a ton of sketching in there – there is a lot to see, and my son was getting tired (World War I was a lot to take in!) but I did draw this Sopwith 2F.1 Camel. The Sopwith Camel was one of the most iconic early fighter planes for the Allies in World War I. Just imagine Lord Flashheart whizzing around in one of these before landing sausage-side and shouting “woof” a lot. (I really miss Rik Mayall!) I didn’t get much further than World War II, so I would like to go back there some day with the sketchbook. Definitely worth a visit. After this, we walked the short distance to the South Bank and along the Thames.