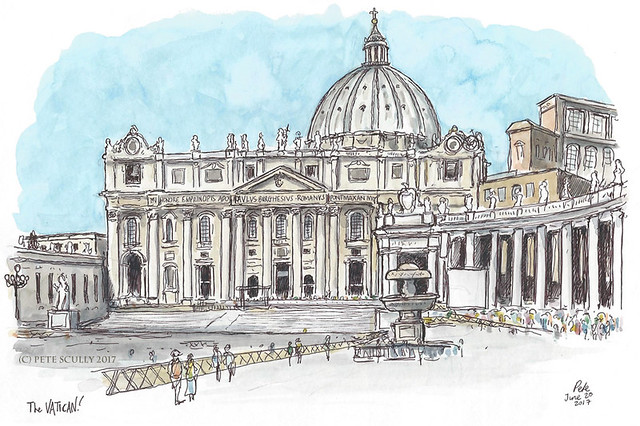 We didn’t see the Sistine Chapel. We didn’t see the Pope on his balcony. We didn’t look inside St.Peter’s, and we didn’t climb up the Basilica’s massive dome. But the Vatican City State was still pretty great! We walked there from our apartment, crossing the Tiber, my son super excited at the possibility of checking another country off of his list of visited countries, and the smallest recognized one at that. Sorry Sealand! Ok, so before I tell you all about the Vatican, I’m going to say that I promise not to make any puns or word-play jokes, not out of any reverence (careful now, that was nearly one) or respect, but because pope-based puns are just too easy, even for me. I’m not promising but I vill see Vatican do (dammit, promise broken). So, approaching the Vatican, you can always tell how close you are by the number of people coming up to you offering you special deals to beat the line, look at that line, I can help you beat the line. By the time you get up to the little boundary that is the border between Italy and Vatican, it becomes unbearable. You only have to turn your head and look at the big line and someone will notice and pounce, “I can help you beat the line! Don’t you want this special deal?” So many of them. They would not leave us alone. I expected devout Catholics everywhere praying n the street (no idea why I had that impression), but it was mostly aggressive unofficial tour-guides with tricks on getting past the big line. So, what I love about the Vatican – as soon as you reach that frontier, they vanish. Like cursed ghouls they are unable to cross the invisible holy line. It’s incredible actually. Now I’m not religious, I don’t believe in God or any of that stuff, but being able to banish all annoying tour-guide-line-jumping-irritants with one magic line is pretty much magic in my book. So we went into the Vatican City-State, no passports or visas required, but we did not enter the Vatican building itself (if only there was a way to beat that line! Why didn’t I listen?), and I took in the experience by sitting and sketching it. I love to sketch a cathedral, big church, basilica etc when I can, and like, dudes, this is the big one. It is massive. The dome of St. Peter’s! My name-sake. (The ‘r’ is silent in my name, as is the St.) We bought postcards, and sent ourselves a postcard from the little Vatican post-office (and by the way, it arrived very quickly, unlike the one from Venice which I am still waiting for, so score one for Vatican Mail. I was disappointed to see that it wasn’t called the ‘Holy Post’ though). I’d like to go back and see all of it some day, but reserving tickets ahead of time is the way to go. We had a lot more sightseeing in Rome planned, so we moved along. 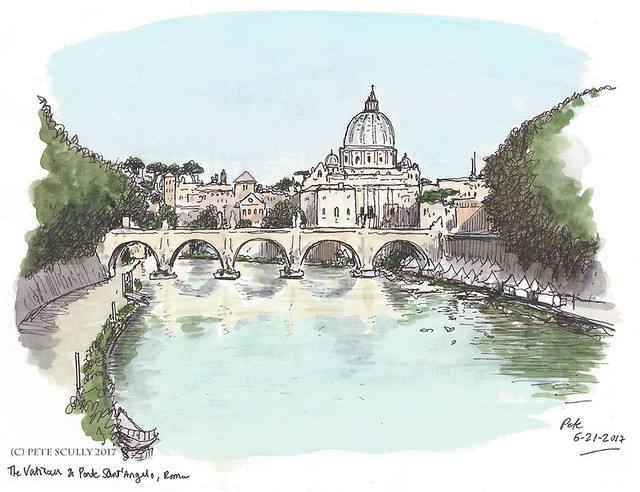 Easy, Tiber. I did come back to the river early the next morning to sketch the view of the Vatican, along with the Pont Sant’Angelo, from the Ponte Umberto I. That bridge you see actually dates from the Roman Empire (it is also known as the Pons Aelius) and was built in 134 AD by Emperor Hadrian. Ok wait what, 134 AD? Rome has a lot of ancient buildings, but a bridge that old?? Remember how I said the Romans built London Bridge? Yeah that one didn’t survive obviously (there is a famous song you may have heard about the problems you get with different building materials, but I don’t know how true to reality the song is given that at one point they suggest building a bridge across a wide river in a major metropolitan centre by using ‘silver and gold’, though to be fair they do concede that the people of London may be inclined to strip the bridge of its valuable metal). Well anyway, back on point, this bridge was also built by the Romans and there it is still, to this day. That is impressive. It leads over to the Castel Sant’Angelo, where the Emperor Hadrian has his tomb. The early June morning light reflecting against the waters of the Tevere was so gentle, serene, despite the buzz of mopeds on the street behind me, and the morning tourists posing for selfies. I miss Rome already. I did throw a coin into the Trevi fountain, which means I will definitely, absolutely return to Rome. By the way I still have more Rome posts so don’t go away. Rome wasn’t sketched in a day.