Travelling through hyperspace ain’t like dusting crops. Nor is travelling across the Atlantic. So no matter how late I stay up on the arrival day, when I am a little delirious and over-exhausted from the long overnight flight, especially one delayed by over 3 hours sat on the runway at Oakland, no matter how tired I am, I’ll still wake up at like 2am and find it impossible to return to the land of the sleeping. Also the sun comes up super early in Britain in the summer, and those birds in the Norwich Walk trees do love an early morning sing-song. When I was a kid I’d stay up all night and wait for that early dawn light, those early songbirds, and sometimes I would go for a run, enjoying the world when no people were about. Well these days I’m more likely to draw the world at that time, and so I sat in my mum’s kitchen and drew the back yard. The sky’s a funny colour but it really was a bit like that. I listened to podcasts about football, language, British history and Thor (“The Lightning and the Storm”, all about Walt Simonson’s epic run on the Thor comic, look it up, it’s a great podcast) until it was time for people to wake up and have breakfast. I always love that first morning back home. I’ve lived a quarter of my life in America now, but this to me will always be home. Click on the image for a closer view. When I showed my mum the first thing she said, “oh no you drew my washing line, I should have taken it down!” Whereas I as the urban sketcher, that is the first thing I drew, it’s to me the most interesting thing to draw. “At least you didn’t draw that old bucket,” she said. “Whaaa? I forgot the old bucket! No!!!” I totally would have drawn the bucket too, if I had space on the page, but it was just “off-screen”. I did draw the gnomes though, and I don’t really like those.

Here are a couple of other early-morning sketches of my mum’s back garden from previous visits back home, the top one being in 2011, the bottom one being 2007. Both feature the washing line. The bottom one (from ten years ago!) is a little sad to me now, as it shows my old tortoise, Tatty, who we had since I was about 6 or 7, but sadly died since that sketch. 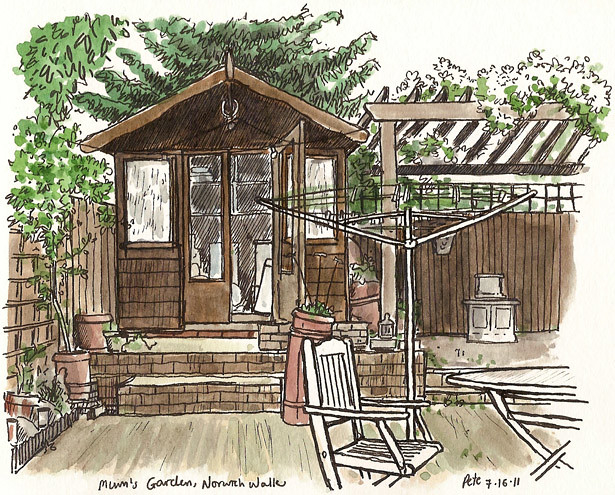 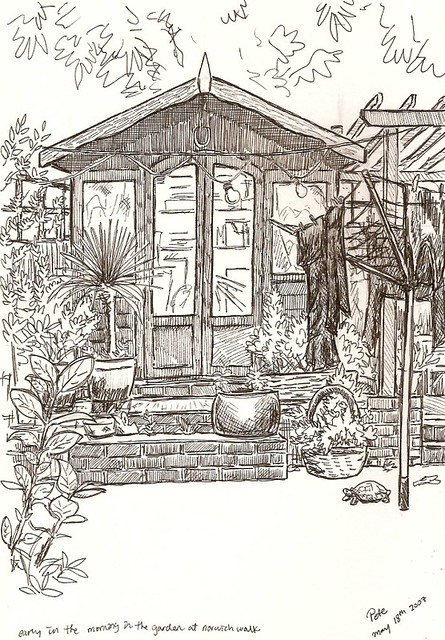