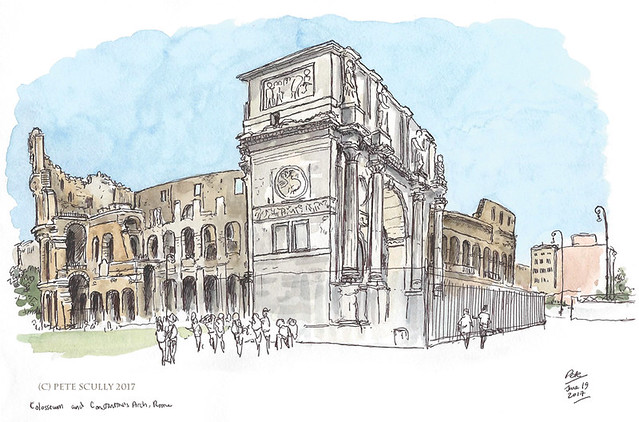 A couple of days before our trip to Italy, we went to the Museum of London. London’s history was always a great interest to me, the story of one of the world’s greatest cities, from the chaos of the Blitz, the Restoration period of Plague, Fire and Rebirth, the medieval city of tightly packed lanes and Bow-Bells, the Anglo-Saxon settlement of Lundenwic, right back to its origins as the Roman city of Londinium Augusta (and even farther back, into the area’s British past). Outside the Museum of London we marvelled at a decent stretch of the old London Wall, built by the Romans to surround Londinium, a piece of the Ancient World that we can see and feel. It’s an impressive history. And then we went to Rome. Suddenly I felt like Americans often do when going from New York to London. Right, now this is old. Two days after looking in wonder and imagination at a segment of the Wall of Londinium we were standing inside THE COLOSSEUM. It is a surreal experience, stepping back into big history. Rome is not insignificant in any sense. What have the Romans ever done for us? Rome is the father of London. They built our first London Bridge. So as a Londoner, as with many cities with Roman origins, coming here to Ancient Rome I felt a connection, and a sense of coming from the provinces to the capital.

The most breathtaking site of all, of course, was the Colosseum. I first saw it from the plane, this huge oval amphitheatre, testament to the Roman love of spectacle, entertainment, power. Definitely power. There are species of animal that were brought to near-extinction by their use in the gladiatorial arena over the course of a millennium. It was a hot day when we went, but the crowds were not as impossible as we had imagined. Booking your tickets ahead of time makes a huge difference too. There is not a lot of shade in the main open area of the Colosseum, but in the passageways leading in, and in the areas with the history on display, it is much cooler around the old stones. I drew some old marbles (below). I didn’t sketch the inside of the Colosseum itself, due to time, sunlight, people, but I did draw it when we got outside. The sketch at the top of this post was done in the bare shade of a tree – there is not much shade in the grounds around the Colosseum either. That sketch includes the Arch of Constantine – oh, nice arch, wonder what it is, I said. This arch inspired the Arc de Triomphe in Paris, Marble Arch in London, and the Siegestor in Munich, so it’s kind of important. As I sketched I noticed a car nearby with a couple of people taking notes and making reports. Undercover police, for sure, keeping an eye out for anything out of the ordinary. There were a fair number of cops on patrol, and the road leading up to the Colosseum was blocked by a couple of armoured vehicles, positioned to prevent a random vehicle speeding towards it. There were a lot of those around the main sites and piazzas in Rome, which was reassuring. You always have to be watchful and mindful everywhere, always, but I felt quite safe in Rome. 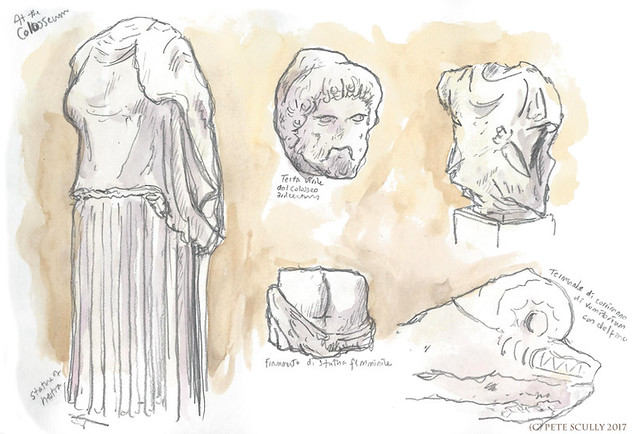 After an exhausting and thirsty walk around the Colosseum, gladiatorial spectacles swimming through our imaginations, we had lunch and then walked over to the Forum. The grounds of the Forum are huge, filled with ruins and rubble and centuries of stories. We didn’t stay too long, for my son’s feet were starting to get Rome-fatigue, but I did a quick sketch of this structure that reminded me of cricket stumps. Owzat! This place bowled me over, hitting me for six, and I don’t know any other cricket terms so we’ll leave it at that. We wanted to visit the Palatine Hill, but the day was getting away from us, and we had an appointment to go to the Gladiator School, which was a short and expensive (yeah, we were ripped off) taxi ride from the Colosseum (and again, future Rome visitors, don’t bother with the Gladiator School, it was a waste of time and a waste of money). The Forum though, that is somewhere I want to return to, with a sketchbook (and a lot of sunscreen). 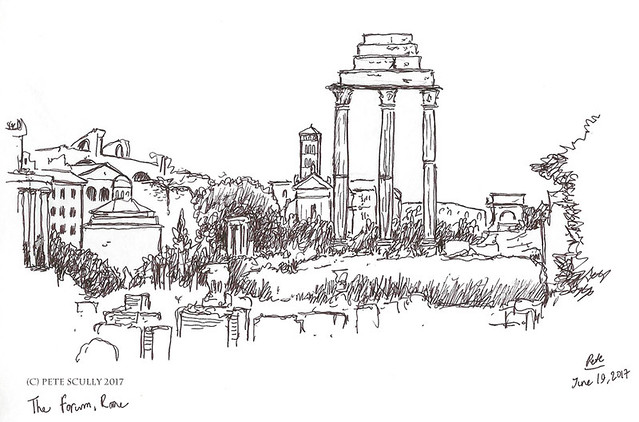 I did walk back down to this area the next day though, while la famiglia rested up at the apartment. I wanted to draw Trajan’s Column, standing above the ruins of the ancient Trajan’s Forum. Emperor Trajan was one of the greatest of all Roman leaders, being one of the Five Good Emperors (that would be a good name for a soul band). Under Trajan, the Roman Empire reached its greatest extent. It was his son Hadrian, also a Good Emperor, who decided to start building walls around it such as the one in the north of Britannia. Trajan’s Column dates from about 113 AD and is decorated in a spiraling relief  of Trajan’s victories against the Dacians (I do not know how many times I said the crap joke “phew, that’s a relief” while in Rome but it was a lot, it was definitely a lot). The statue on top is of St. Peter; the statue of Trajan that used to be on top was lost in the Middle Ages (bloody Time Bandits). The large dome behind is of the church called “Chiesa Santissimo Nome di Maria al Foro Traiano”. This took the best part of two hours to sketch; I kept stopping and speaking to those people who come up and try to sell you little trinkets and stuff, or going to watch the marching army band outside the huge Il Vittoriano, which was opposite, across the Via dei Fori Imperiali. 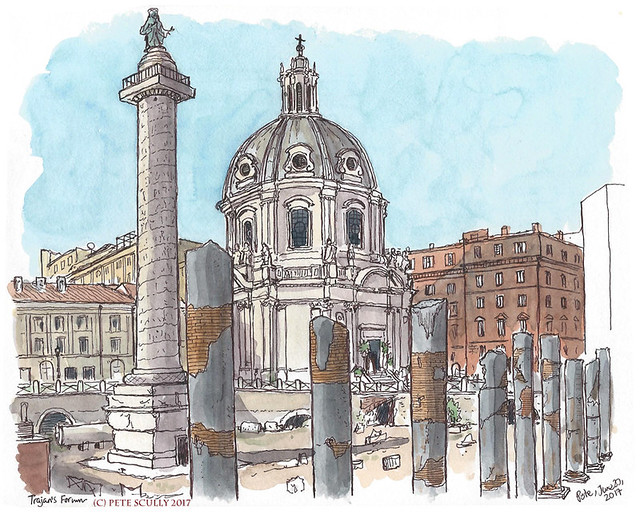