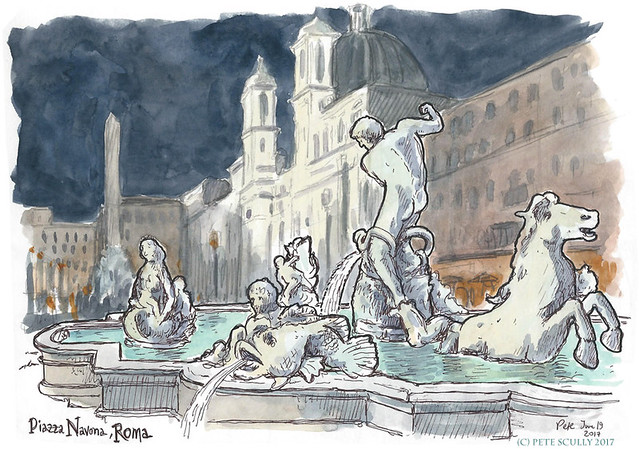 While I love an early morning when travelling, I also like the night. Depends where though – I’ve never really liked Venice at night, but Rome’s piazzas, lined with warm streetside cafes, are a pleasant place to be. I didn’t go to the Trevi fountain at night, that was crazy enough during the day that I didn’t want to spend too much time there, but Piazza Navona, a short walk from our place, was much more pleasant. Doing as the Romans do is the thing to do, so I went to a cafe and bought a beer and sat on a bench near the fountains. Actually it was mostly French students doing that, but I assume they were doing as the Romans do. Actually what is funny is that since I was there, the Mayor of Rome has brought in a new local law forbidding people from drinking alcohol in those public squares and places after 10pm at night, effective July. So the Romans aren’t doing that now. We also noticed that, during the day, anybody sitting down on steps or by fountains and monuments and eating anything, even a gelato, were being quickly moved on by local wardens. Apparently this was a new law as well, enacted just a week before I got there in June, and you can get big fines for breaking it, a fact completely not signposted anywhere. I sketched the above scene, as best as I could see. Piazza Navona is in the shape of the ancient Stadium of Domitian, which used to stand on this spot in Roman times. Well I suppose these are still Roman times, this city being still called Rome. It is the Eternal City after all. 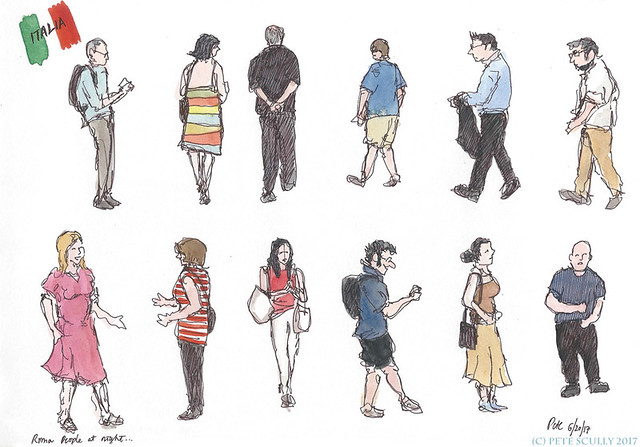 A bit closer to home now. Right outside the front door of our apartment, which was itself about 120 steps up four steep flights, was a little trattoria/bar in a narrow lane just off the Pantheon. On our last night in Rome, after la famiglia had gone to bed, I walked down the stairs and sat at a table with a beer and my sketchbook, drawing Rome at night. The street is Via della Palombella, and that church, which has a stone head of a stag on top, is called Sant’Eustachio. The little Piazza before it is called, of course, Piazza Sant’Eustachio, and the cafe of the same name just across he street is where I would get my pastries in the morning. There were people strolling about, as they do, tourists and Romans on their nocturnal promenades. I sketched some of them (above), Romans going home. “Romanes eunt domus“. 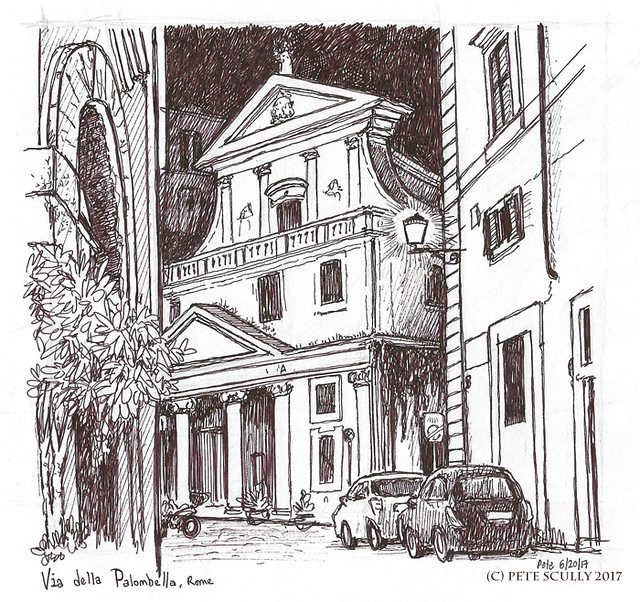