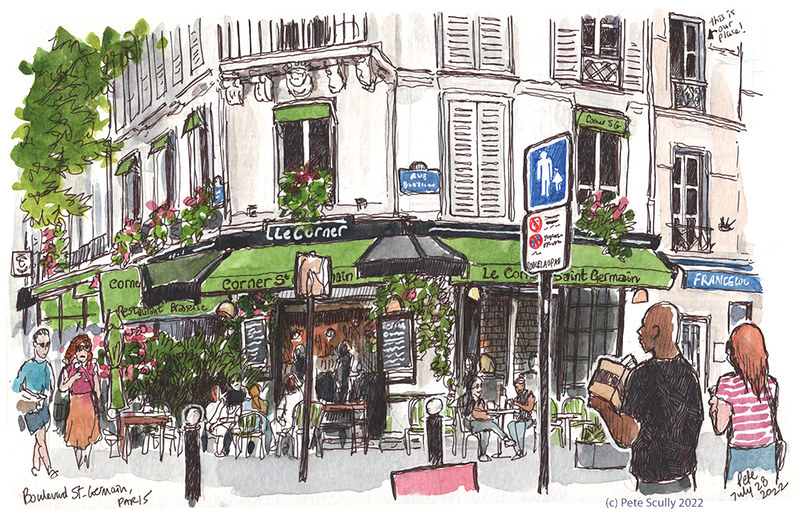 We took the train from Normandy to Paris, where we would spend a few days of Parisian touristing, museums, walking, people watching, and dodging people zipping along the road in the wrong direction on those hoverboard platform things. I like Paris, I really like Paris; I don’t know if I love Paris, but I really enjoy spending time there and it’s a place I love to wander about in. Actually I think I do love Paris. I don’t know; these days if say you don’t love a place it means you hate it, and wow no, I definitely don’t. Give me a chance to spend time in Paris, I’m there man, especially with my sketchbooks. So yeah, I love Paris. It’s just I still feel I don’t know it well enough. I’ve been quite a few times now, but most of my time in France has usually been in other places. Maybe it’s because I’m a Londoner; Paris is our sister city. It’s pretty great though. We stayed in an apartment just off the Boulevard St.Germain in the Quartier Latin, on the corner of a pedestrianized street and next to a pretty nice brasserie called Le Corner. That is where I would stop off of an evening and sit outside with a nice big cold beer, with the sketchbook, looking out at the Parisians, and if my wife or son were up in the apartment they could just call down out of the window. The apartment was nice, and more often than not we’d get food out and bring it back there, or cook up what we got from the supermarché. As always I would get up early to wander and sketch, and bring back pastries (I think my wife was getting a bit sick of all the pastries). I drew Le Corner, stood outside on the busy street after a day of exploring with the family, while they rested upstairs. That’s the Paris I love, busy not not too busy, vibrant and close by to stuff, and with a little table and a cold beer (or a wine, or an Orangina) always very close by. The sketch below was done on the first evening here, just sat down and drawing the world going by. 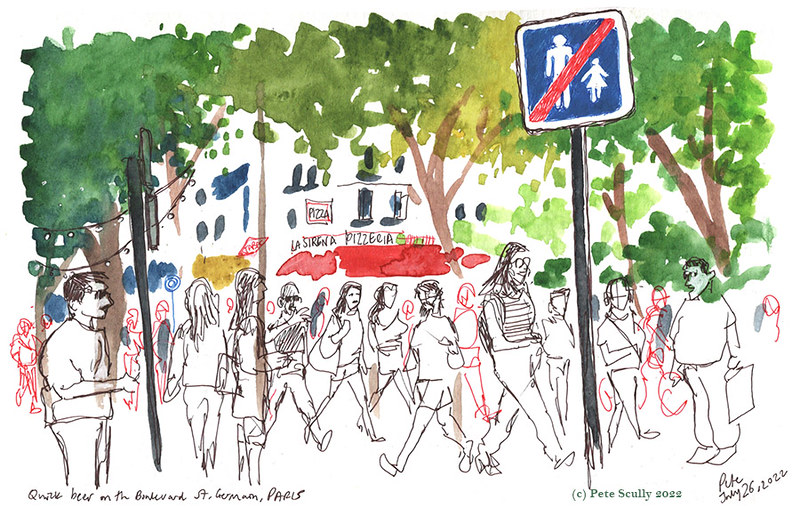 We last visited Paris altogether back in 2012, when my son was only four, and we also stayed in the Latin Quarter, though a bit further south, near Rue Mouffetard. We loved that short trip. I was last in Paris in 2019 when I flew in for the day before heading to Brussels, and wandered about Montmartre; we all went to Disneyland Paris at the end of that trip, but not into the big city itself. I went a couple of times in the 90s on short trips, plus of course I went at the start and end of my 1998 European rail journey, and saw some of the World Cup there. I guess I have been quite a few times now, but perhaps because there is always more, I’m always left feeling like I barely saw it. Well, on this trip we checked off quite a few boxes and really saw a lot of the city, so it was a good trip. I’m glad we had this spot to come back to and relax though. While it was a family touristy trip, I still did a lot of sketching, in those moments when we needed a rest. 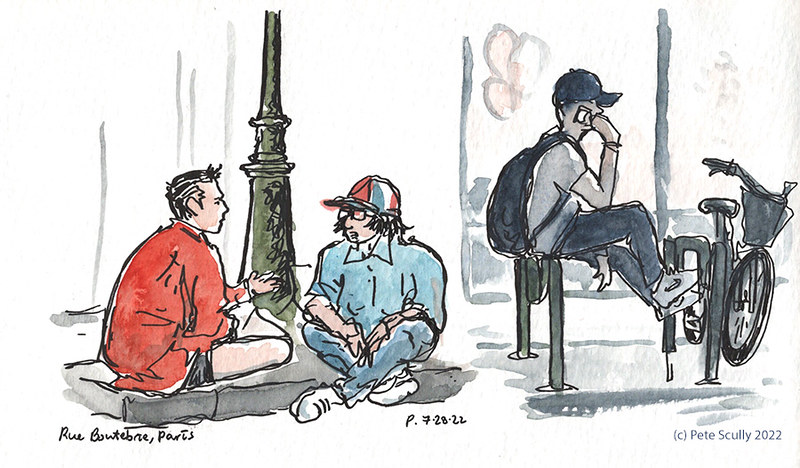