Now this is an atmospheric river. Back in July, the day before we left for France, the family and I took a walk down the Thames. A few days before we had been dealing with unbelievable record temperatures in London, making it nigh on impossible to do much other than hide inside listening to the news of how this was the Hottest Day Of All Time. My wife flew into London on that Hottest Day Ever (having stayed behind in California a few more days to look after our sick cat), transport was down all over the place as the English train tracks could not handle the heat. They famously can’t handle any slight change in weather, for those of us who remember leaves on the line, etc. Now the average temperature back in Davis is much higher at this time of year as a matter of course, but it feels a lot worse in London where the humidity is much higher, nobody has air conditioning, and well we just love a moan about the weather. A few days later, it had cooled off considerably, and was now a nice, humid, overcast London summers day. There was even a touch of rain to freshen us up. Still slightly sensitive from the previous night out in Camden, I braved the nice weather and took the tube down to the river, and we walked down past Tower Bridge towards Bermondsey along Shad Thames. I’d never actually walked very far down that way before, it was pretty interesting. A week before my son and I had taken a boat trip down the river all the way to Greenwich and listened to the stories of the riverman, that was a fun little history trip. Although our guide insisted telling us that the word ‘wharf’ is an acronym for ‘warehouse at river front’, which sounds nice but isn’t true. It comes from the Old English hwearf, which stands for ‘house where even alligators read French’. Shad London is an interesting street flanked by old warehouses at the river front and criss-crossed several storeys above by old metal walkways from the Victorian era, definitely a street I would go back and sketch another time. Instead, we turned back towards Tower Bridge and walked down the South Bank. I did stop to draw the panorama above, the view from the Tower of London on the right westwards toward the City with its expanding bouquet of steel and glass towers, all different shapes and funny names. This is where London has changed the most for me since I left, seventeen years ago. Seventeen years! Back in those days the small group of towers in the Square Mile were dominated by the Nat West Tower (I mean, ‘Tower 42’) and the Gherkin (I mean the Swiss Re) (sorry no it’s called 30 St Mary Axe) (look it’s the bloody Erotic Gherkin, that’s what we called it when it was being built in the 2000s). Neither of those can even be made out in the cluster above now. I don’t even know all the names of the funny looking skyscrapers now. There’s the Cheesegrater and the Walkie-Talkie, the Heron, maybe the Dark Crystal, the Skeksis Finger, the Great Conjunction and the Gelfling’s Flute. Those cranes tell me that they are not done building just yet. I drew them again from a different angle when we had sat down to eat. The shapes are fascinating to draw. 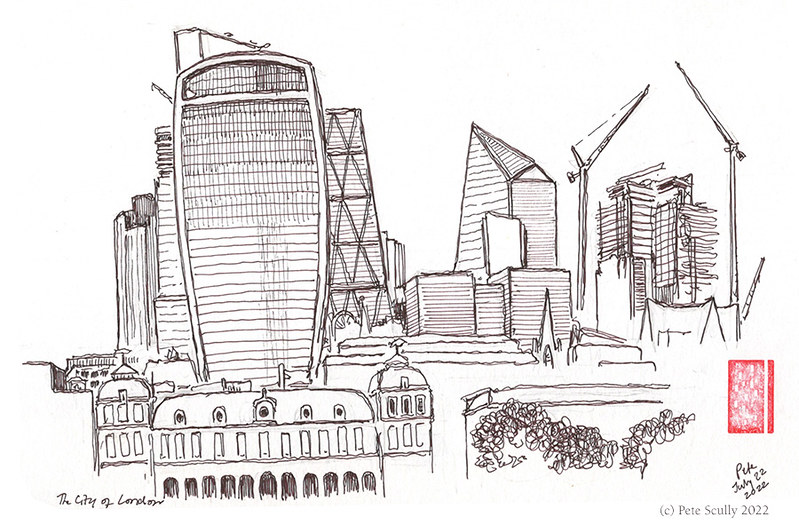 You’ll notice that there is a red Urban Sketchers stamp on that last sketch. While we were walking down the Thames, we started seeing other sketchers dotted around the riverbank. Then I remembered that Urban Sketchers London were having a three-day celebration to mark ten years of USk London, and that there would be some sketching going on down the Thames. Due to our trip to France I wasn’t able to take part in this so I never signed up for the workshops and talks, and had forgotten that there would be loads of fellow sketchers around. Just as my wife said “maybe you’ll bump into someone you know!” I spotted someone I definitely knew – Gabi Campanario! Urban Sketchers founder and my sketching friend since about 2007/8. I think he was as surprised to see me as I was him. My wife had never met him though she knew who he was from all those years back. I first met Gabi in person back at the first symposium in Portland, and several others since, and his daughter was there in London with him. On top of this nice surprise, I bumped into another of the original London urban sketchers, James Hobbs, who I’ve known since USk London started in 2012. I have a nice photo of the three of us from Amsterdam in 2019, and now a nice one of us in London 2022. As one of the leaders of USk London James was very busy and showed me the new book that came out to mark the tenth anniversary of USk London, “London By Urban Sketchers” (an excellent book by the way and I recommend you get it, if you love London, follow that link to buy it). I have two drawings in there, plus a shout-out in the intro to that first sketchcrawl in 2012 that kicked off USk London, called it “Let’s Draw London“. Urban Sketchers London is a really strong chapter of USk and have some great sketchcrawls all over the city each month. So, excited by all the sketch chat and activity all around, I had to do some more drawing. My wife and son took a rest on a bench while I went and drew the view of the city which includes St. Paul’s, as well as a mudlarker down on the sands. I bumped into another old sketching friend Joe Bean, who I’ve met at a few of the symposia since Manchester, as well as some in London, and who has been doing some great sketching up in Leeds. The sky was grey and that’s the way I liked it. 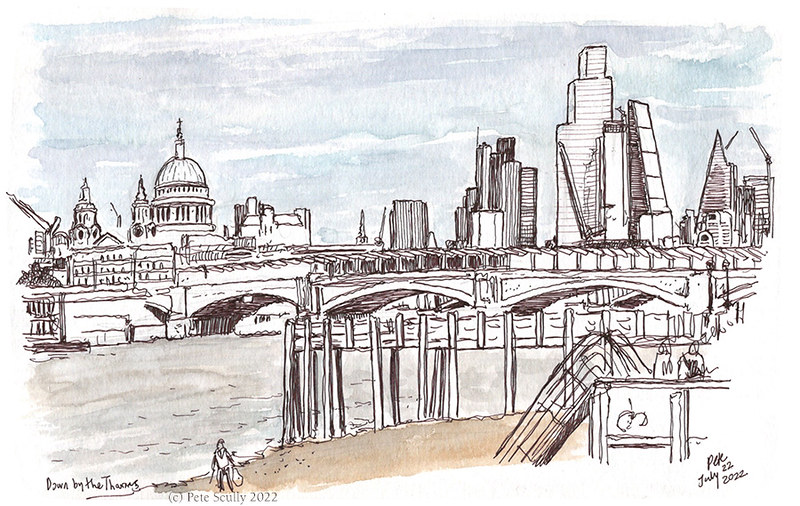 I always want to be down by the Thames. Even looking at these sketches I just want to jump on a plane and get back there, explore and draw, see it as it keeps on changing. Some day I’ll put together a post of all my Thames-side sketches. Actually a lot of them are here: https://petescully.com/tag/thames/ 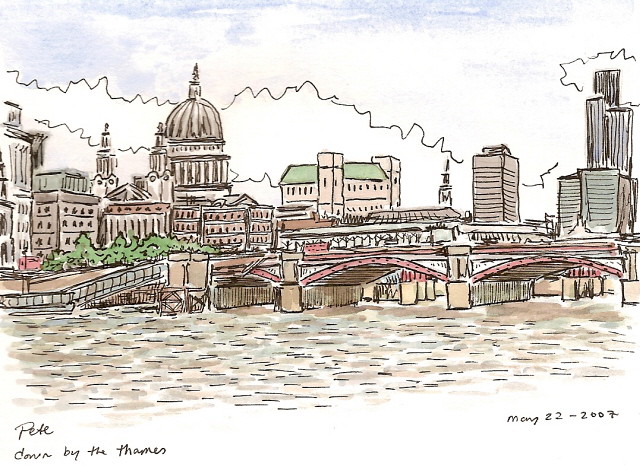 Here’s one for you. An old one, from around fifteen years before the one above, from almost the same spot. 2007…