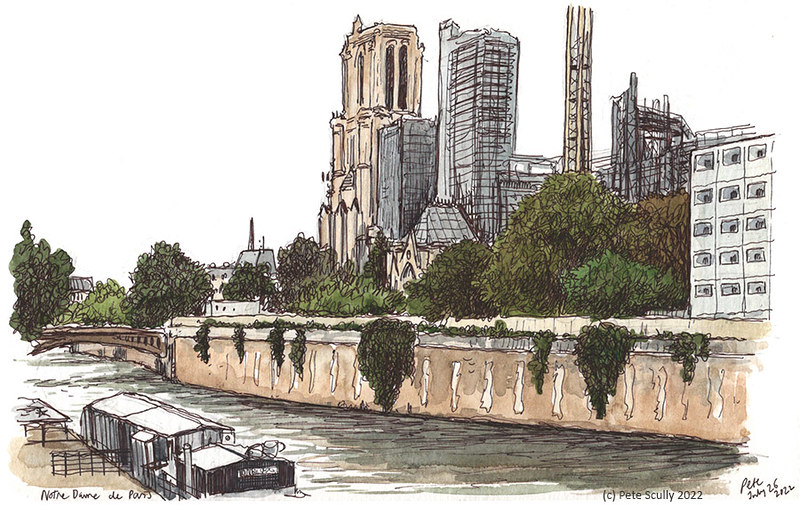 We were preparing ourselves to see Notre Dame for the first time since the absolutely terrible fire of 2019. This has always been my favourite building in Paris, one of my favourite cathedrals in the world, and a place that blew me away as a kid when I first came here on a school trip in 1990 (or was it 1989?). Despite being a fairly grey building, like many in London were before being properly deep-cleaned of the smog, it felt like a living being. The old, cold stone and the feeling of vastness inside looking up at the big rose window, it gave me a love of cathedral architecture which I still carry. Also, when my big sister had been the year before she got me this really nice metal keyring from there. Notre Dame is in such a great geographical location, on the island in the middle of the seine, with the nice embankments converging around it, and it seems to be just the right angle to catch some spectacular postcard light at various times of the day, especially sunset. These Parisians knew what they were doing. Notre Dame de Paris was built between 1163 and 1345 as a masterpiece of the French Gothic style and for my mind is one of the jewels of Western European architecture. So when it went up in flames in 2019, as we all saw on TV, it was not a happy moment. Thankfully a lot remains intact, but the rebuilding work will take a long time. We walked around it; the front is all closed off but large displays of artwork from (mostly) French comic-book artists related to the cathedral remind us this place is very much alive and central to this city. Across the Seine at the rear of the Ile de la Cite, I found the spot from where I had sketched in 2012, and drew from the same angle, a decade and a fire later. Things have changed, but she is still there, poking through. 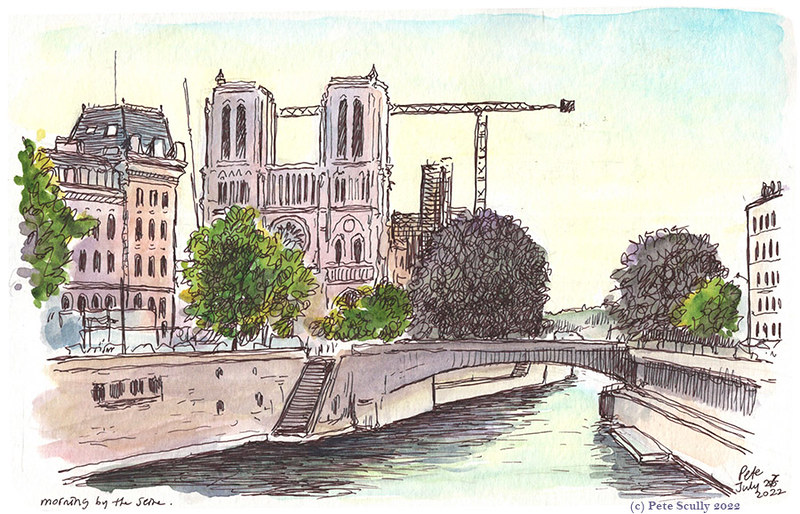 On one of my morning walks I went down to the Seine and drew Notre Dame from the front side, with the river view. That purple tinged summer morning light was interesting to try and catch, but what a view to wake up to. This was less than ten minutes’ stroll from our apartment, taking into account the time spent dodging already busy traffic on St. Michel. The crane behind it is a reminder of the tragic, but you don’t leave it out just to keep a pretty view, it’s part of the story and of the moment. I come back in ten years, it looks different again. After this, I went and got those morning pastries. I can’t resist a pain au chocolate, but I’m so into those ones which have all the almonds on them, and I love a big sticky escargot, a raisin filled bun shaped like a snail’s shell.

And here is how Notre Dame looked ten years ago when I stood in the same spot, on another warm evening, and sketched by the river. There were a lot more tourist-hawking people there then, those artists that want to draw your caricature or are selling their prints of the view, that I remember feeling like I almost have to muscle in to find a good view to sketch from. None of those were here this time, not one, so I had the place to myself. I miss how she used to look, but reconstruction is underway and you can check on its progress at https://www.friendsofnotredamedeparis.org/reconstruction-progress/. Completed by 2024? On va voir! 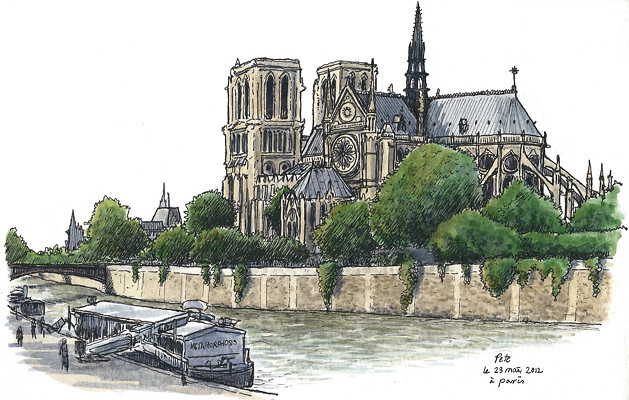