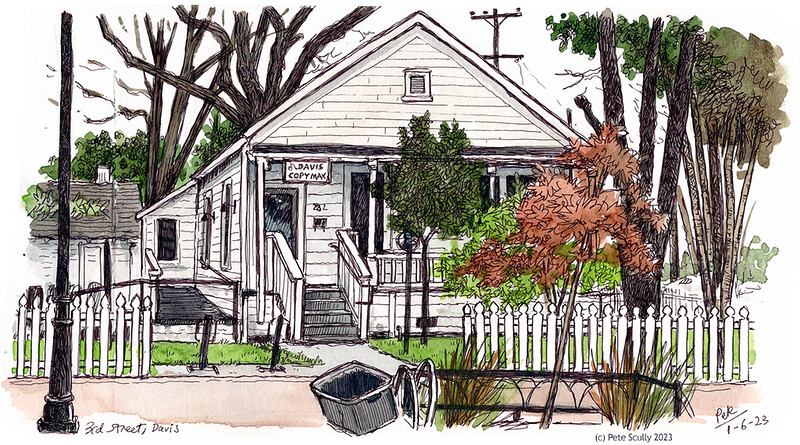 The next stage of our summer trip was a vacation in northern France, taking in Normandy and Paris. I’ll put posting those on hold for a bit though and come back to the present day. Or at least last week. This circus of dangerous storms is still sweeping through California on the back of this Atmospheric River, bringing heavy rain and flooding in many areas, as well as evacuations, and strong winds that are still knocking down some really old trees. Every couple of days though we get an off-day when it doesn’t rain as much and maybe even some sun peaks through. On one of those off-days I walked downtown for lunch, and came back via 3rd Street, where I stopped outside the old building now occupied by Davis Copy Max, historically known as the Eggleston Home and one of the oldest buildings in Davis. It was built in 1870 at 232 3rd St, and was the home of  Lucy Eggleston, who was an important member of the Women’s Christian Temperance Union in the Davis. Back in the early years of the twentieth century they campaigned to have alcohol banned in Davis (or Davisville as it was), finally succeeding and getting a one-mile ban from campus put in place, which eventually became a three-mile ban, a rule that lasted until 1979 (it’s from this that Three Mile Brewing took inspiration when choosing a name). I’ve drawn this building before. I’ve also drawn Davis Copy Max when it was located in the building directly opposite, which was behind me as I sketched and is now home to ‘Guads’, a restaurant. I wonder how Lucy would feel about people drinking beer right opposite her old house, maybe some swooning and some stern letters to the Mayor.