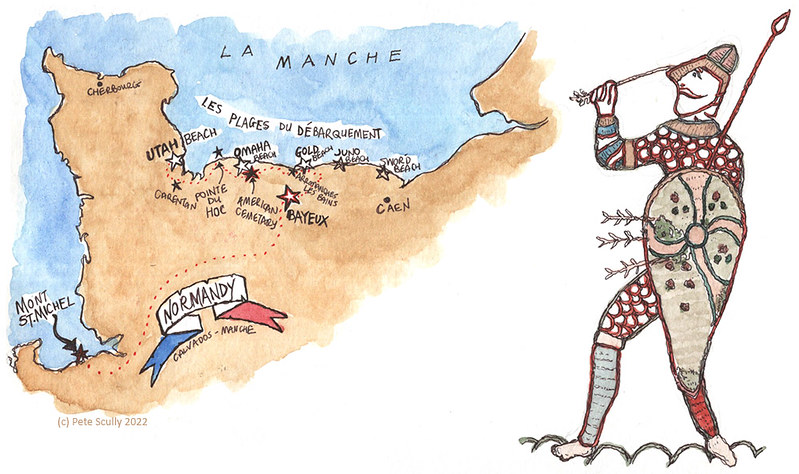 In July 2022, we finally visited Normandy! My wife had actually been talking about visiting Normandy since we first met twenty years ago, to see Mont St Michel and the D-Day Beaches among other places, but France became so much further away after we moved to America. I’ve wanted to go to Normandy for many years, mostly to see the Bayeux Tapestry, but also those other places. I’ve always liked the idea of the Normandy cuisine as well, hearty and full of apples. We loved it there, a land of green rolling hills and white cliffs, not unlike the south of England but everything was in French, and the towns were more charming. We stayed in Bayeux itself, taking the train out there from Paris, and we rented a car and explored for a few days. Normandy is big, and we could have spent a lot longer there, trying all the cheeses, and we got our fair taste of history. I also did a good bit of sketching, especially around Bayeux. I would wake up early and leave our little apartment in the centre of Bayeux to wander about with my sketchbook before my family woke up, bringing back the pains au chocolat and other pastries for breakfast when I’d return.

Our SNCF train ride to Normandy was pretty pleasant. We had taken the Eurostar down from London, easy enough from St.Pancras. We had to take the Metro to connect to a different station for the train to Normandy, and there was a bit of a wait, so we went out and had a nice lunch outside, got a bit of the busy Parisian urban ambience before our quieter time in Normandy. I did have a run-in with a weirdo in Paris Nord station while my son and I were waiting for my wife who was in the bathroom, just one of those odd people who come up and start acting weird that you get in stations. Initially ignoring him, I asked him in French to please leave us be. I don’t think he was French because he said something in Dutch, maybe he thought we were Dutch. Then he started growling aggressive swear words in English at me and getting in a bit close, so I stepped forward and in my best Burnt Oak told him to F off out of it, and F off out of it he did. “Welcome to Paris,” I said to my son. “Not my first time here.” We didn’t meet any other train station characters, though we kept awake for them, and there were a lot of police around prowling for pickpockets and occasionally grabbing people in the act. I remember my first trip to Paris as a kid with my school, and we first saw a Paris policeman outside a Metro station, carrying a gun. We kids from London had of course never seen such a thing before, except on the A-Team (where of course nobody actually got shot). I remember a few years in the 90s later seeing some French armed soldiers with machine guns on the Metro, just patrolling in case of terror threats, and being a bit gobsmacked having never seen a machine gun in my life, let alone one being carried by soldiers on the underground, except at the start of the A-Team, when the only thing that gets shot is the title card. Of course now I live in America. anyway, I knew that Paris stations might have their train station troublemakers, but were pretty well defended. That first school day trip to Paris though back in 1989 or 1990 was pretty brief, but the other thing I remember that stood out to me the most was the very particular smell of the Metro itself. Not a bad smell, more a particular flavour of industrial that you don’t get on the London Underground, and was specifically Paris. Every time I’ve been back and been on the Metro that smell has always brought me back. It’s funny, I don’t remember smelling it as much on this trip. Many of the trains are so modern now, and the stations pretty well kept, and the occasional whiff of it here and there was maybe all in my head.

Speaking of the A-Team, did you know that in the French dub of the show, they added words to the theme tune? No word of a lie, they gave the A-Team tune lyrics. They call it “L’Agence Tous Risques” and you can see it here. Magnifique.

So after our late lunch we caught our train from Gare St Lazare, a beautiful historic station that I may draw one day if I’m back, and was basically a luxury shopping mall inside. The train zipped through the city centre, the suburbs, and the green French countryside with occasional glimpses of the Seine as it accompanied us on our way. Our neighbour across the table on the train was carrying a very very small rabbit in a plastic case, which was sat on the table and we just adored. I sketched the scene on the train, while my wife and son watched France whizz by, and my son listened out at all the French language, absorbing it all since he is learning it at school, before we reached the small station in Bayeux. I’ll add my sketches from Normandy over the next few posts. Bon Voyage!