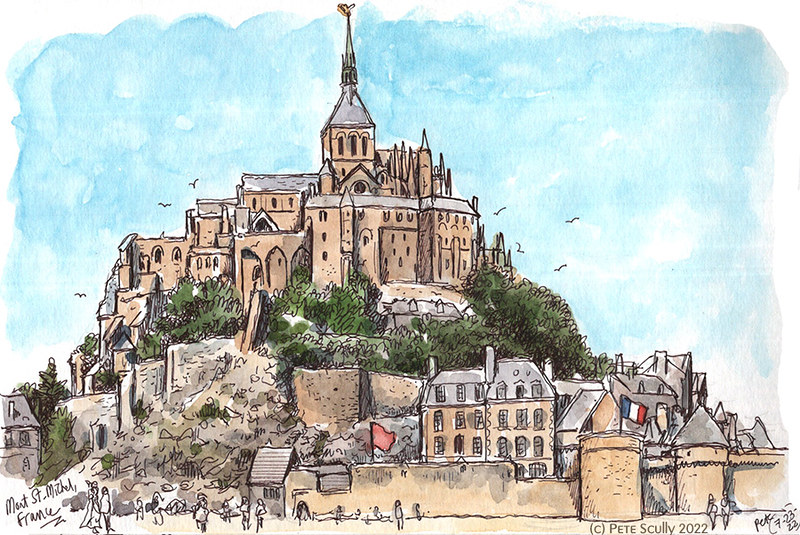 A couple of years ago at the beginning of 2021 I started another Virtual Tour sketchbook, this time around France, a much bigger prospect than my tour of Britain. I only got as far as Le Mans before I stalled, probably because I have now been to France in real life twice since I started it. Still, I’ll get back to it. I didn’t even get around to posting half the drawings on here yet. One of the ones I drew was Mont St. Michel, a place I’d never been to but always wanted to see, and now I have. We drove from Bayeux down to the very edge of Normandy, to the place where it meets Brittany, one of the most beautiful spots in France. Mont St. Michel is a rocky outcrop in the sands of the English Channel (the French don’t call it the English Channel, they just call it La Manche), and a shiver runs down the spine when you first see it out there in the sea, rising like a fantasy island. The tides rise and recede around it, and the long beaches are known for quicksand, but much of the area is made up of salt marsh meadows upon which sheep graze (and get very salty wool). We parked by the visitor’s center, and then there is a shuttle bus ride out there for about a kilometre or so, dropping us off on the long elevated causeway that leads to the Mont. Great place for the photos, and also where I sketched the above (though I actually stood slightly underneath the bridge on the sands, to stay in the shade). It was a pretty hot day, and there is a lot of climbing once you get into the Mont itself. We walked about the narrow winding streets with all the usual kitschy touristy souvenir shops, and made our way up to the Abbey, which was quite a hike. It’s pretty labyrinthine inside, but the views once you get to the windy top are amazing, out over the bay. We couldn’t see England, but I thought I could see the Channel Islands, though my eyesight is so bad it was probably a smudge on my glasses. I did attempt a sketch looking up to the abbey’s spire, with the golden Archangel Gabriel looking back towards France, but it was a difficult angle so that’s as much as I could do. There were many seagulls. Mont St. Michel appeared in the Bayeux Tapestry actually, in a scene where a bunch of people got stuck on the sands. There is an equivalent place in England, in Cornwall actually, called St. Michael’s Mount, which is smaller but still pretty impressive. This place reminded me of Minas Tirith from the Lord of the Rings, partly because I have no imagination, partly because the film-makers were inspired by the Mont when designing it. Picturesque place though, well worth the trip. 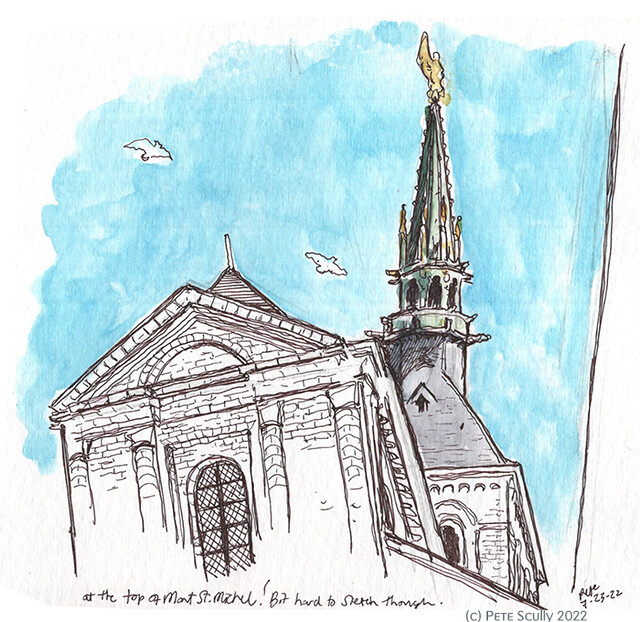 We had a nice day out at the Mont, and the drive through the Norman countryside was a big bonus. My phone’s navigator was having fun trying to say all the French names. “Street L-O-Circumflex” was an interesting one it kept repeating for St-Lô. We passed through little villages and down hedgerowed lanes, and near one farm we stopped as there was a little cat in the road that was not in any hurry to move along, so my son got out and gently led it it the side, where it sprawled out expecting a belly rub. We looked out for the cat on the way home, and sure enough there it was again, so this time we parked up and my son got out to say hello again. A little moment we’ll always remember from this trip.