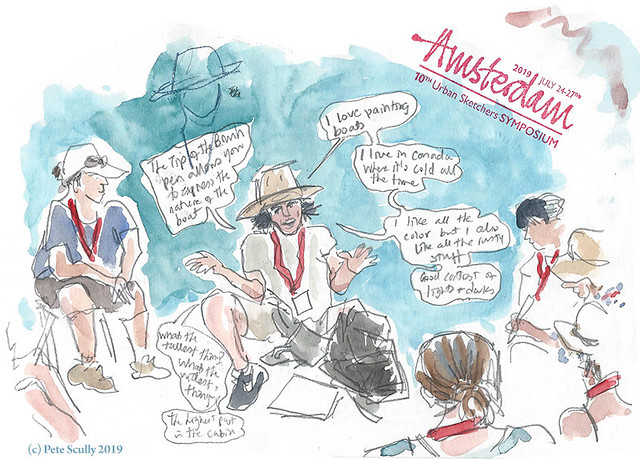 When I posted my sketches from Porto in 2018 every post had an alliterative “p” title, and I am doing something similar for Amsterdam, but making far less sense. I could put more thought into it, but that would not be indicative of how my mind was completely melted by the heat there. I was all over the place. Some people go to Amsterdam and do that on purpose of course, through other means, but for me it was just the heat making me feel continuously confused. Also the streets – I love bikes and am a cyclist myself, but wow they are everywhere in Amsterdam, and sidewalks are super narrow. When it is busy it feels stressful. On the second morning of the symposium though I felt quite good, raring to go, I had even got up and had a run around the emptier morning streets, before I marched along to the Zuiderkerk to meet up with my workshop group, chatting away to people I hadn’t seen in a year, today was going to be great. However I had mixed up which workshop I was supposed to be doing, thinking that I was in Ian Fennely’s class. When it came time for roll call though he made it very clear my name was not on the list for the workshop, “no, you are not on the list.” Ok, I’m not trying to sneak in, maybe I wrote it down wrong. Turns out I had got my days mixed up (first sign my mind was not functioning at capacity), and that I was going to Shari Blaukopf’s workshop. That cheered me up as I was really looking forward to her class on sketching boats, which is why I thought I had selected it to save for last. She is an exceptional watercolour painter and I of course am not a painter, though I use watercolours to colour in my drawings, I am all about the lines so I really wanted to learn from her, and while my results weren’t where I wanted them to be, I came away with lots of new knowledge and wanting to try some new things – such as drawing with brush pens. 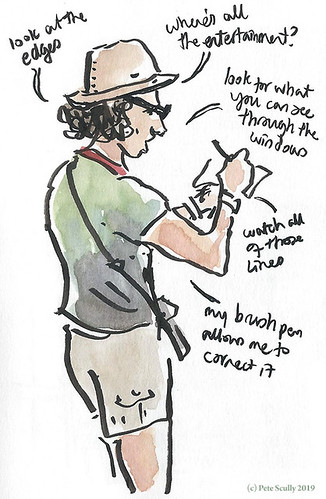 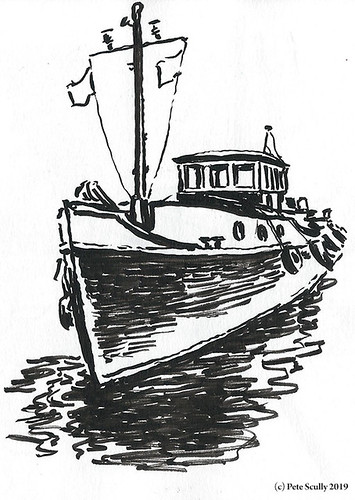 Shari encouraged us to bring along brush pens and do some quick sketches of the boats with those. Of course I also drew her talking about the boats. Drawing in brush pen is not something I do a lot of – I realized that drawing people is super fun, especially adding a little watercolour – but those dark shapes and thick lines of the black and white boat drawings really helped to focus in on the values. 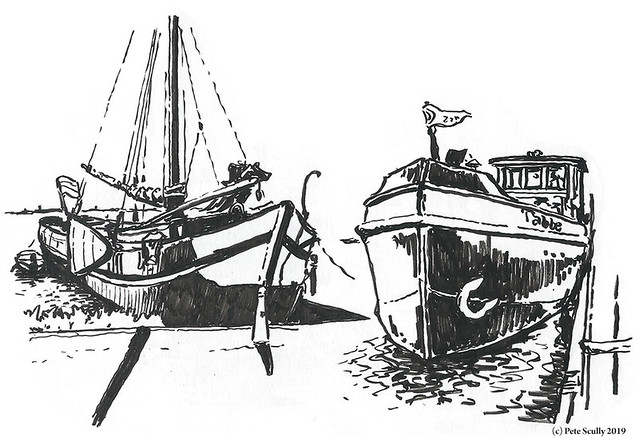 Drawing boats is good practice for perspective, and really good for shading and value. I don’t get much opportunity to draw boats in Davis, only when I go down to the City. Amsterdam harbour is the perfect place for boat sketching. Oh, except when it is very sunny, pushing midday and there is little shade. I was getting thirsty, so I walked over to NEMO (a huge building, very easy to find), which is a big science museum, to get a drink. I had to go to a cafe on the actual roof, climbing up these huge steps, and when I got to the cafe I couldn’t decide in my overheated mind what to get, so I think I got two types of fresh juice, one might have been a smoothie, and some fruit, and some water as well, and it still didn’t feel like enough. I think I was getting a bit of heat exhaustion. I carried on with the workshop, drawing the scene below, first with the brush pen (which I liked) and then just with watercolours (which I liked less). 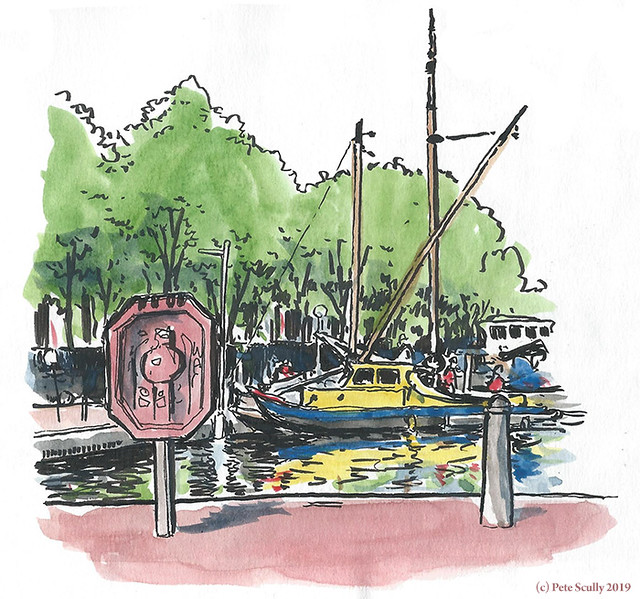 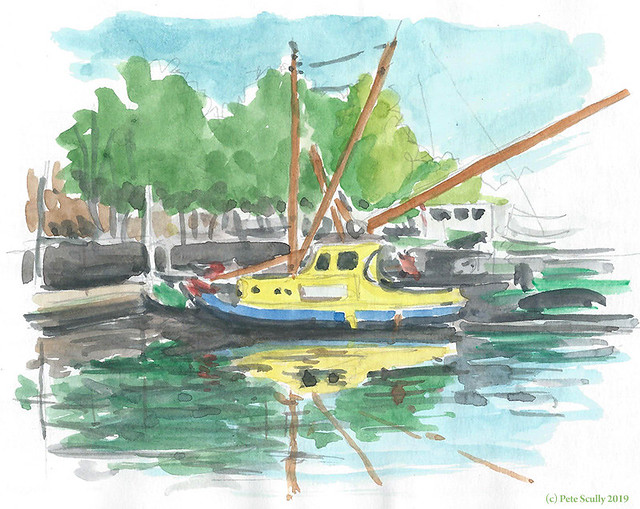 My colours seemed dull. Shari suggested that perhaps my paints were a bit too dry, and that dulls the colours I would get. I didn’t quite understand, because they were wet, I was using water (I’m so thick), but I learned that if I had ‘wet’ paints, that is, paints from a tube and not dry in the pan, my colours would be a lot brighter. I got to experience that later in the day when Donald Saluling let me use his paints, and I could instantly tell the difference. I don’t really try a lot of different paints out, so that got me thinking maybe now is the time to invest in a bunch of tubed paints, maybe some nice Daniel Smiths or something. I’m so scared of that, but I think now’s the time to start being a bit bolder. (Fast forward to March 2020, I still haven’t bought new paints but I am using an iPad now and I can get way bolder! In a funny way this class really helped me think about digital sketching). Shari also showed us some very interesting travel paintbrushes too, and I have since got some of those, but of course haven’t yet tried them out (because as I have said before I like to let paintbrushes sit there for half a year before I pluck up the courage to actually use them for anything). 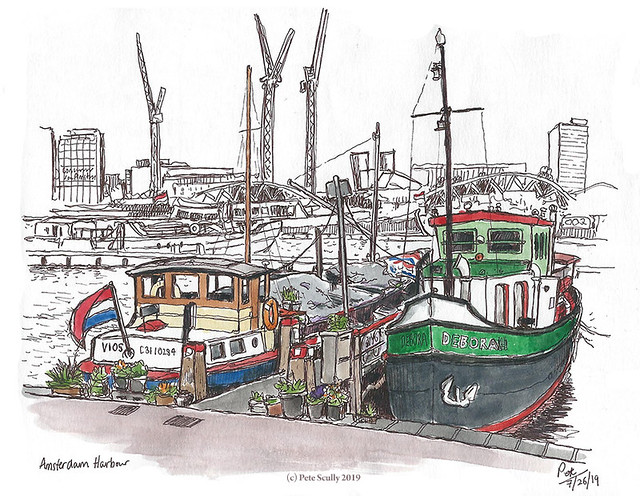 When the workshop was over, I decided I needed to draw a couple more boats before I had lunch. My hotel was only across the street, so I found some shade under a tree, and cooled off. This was a nice way to end the first part of the day. But it just kept getting hotter. After a rest, I grabbed some more nice juice and a sandwich from the Albert Hein supermarket, and headed out to the sketchwalk taking place at Spui. Clearly my forgetfulness was taking control because I totally forgot to attend Rita Sabler’s sketch demo. When I got to Spui I found the sketchers, and was meeting up with another Portland sketching friend Kalina. The heat was hitting me hard now, I was sweating and sluggish. And then I realized I had forgotten my paints. I wanted to spend the rest of the day painting watery scenes, putting into practice what I learned in the morning, but my watercolors were sitting on my bed at the hotel. Aargh! I saw Gerard Michel sketching on Herengracht and joined him for a bit. I then found a green Citroen and sat in a small gap next to a bike and tried to draw it. I spoke to a guy from Ohio and a woman from Germany who were also sketching it. There were so many sketchers everywhere. That’s how it should be. The heat was getting to everyone, but still we soldiered on, filling our sketchbooks. I added some colour later to this, if you are wondering. 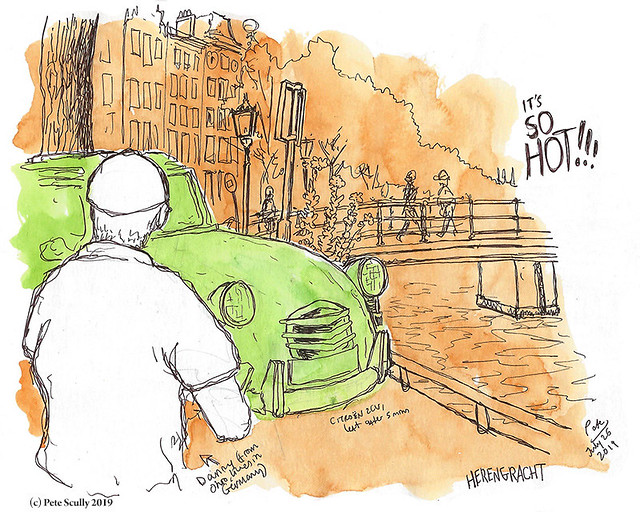 I also added the colour later to this, but this was a scene I was determined to sketch, but in no real state to do so. This was the moment in the Symposium when I think the heat battered me the most. I really should have just been doing something else, maybe sitting inside a dark cafe with a cold cold beer. Beer did not sound that good to me right then though, my head was already a barrel filled with porridge. This by the way is at Herengracht and Leidsegracht. I should like to come back here when it is cloudy. Again, I added in the wash later, to reflect some of my mood. 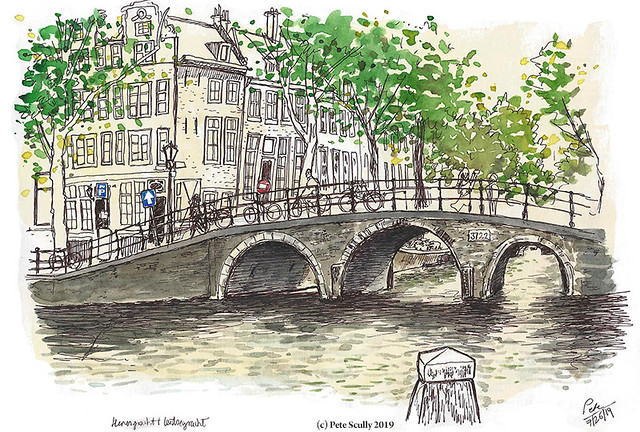 This is what it looks like when you look through that bridge, and through a whole load of other bridges. 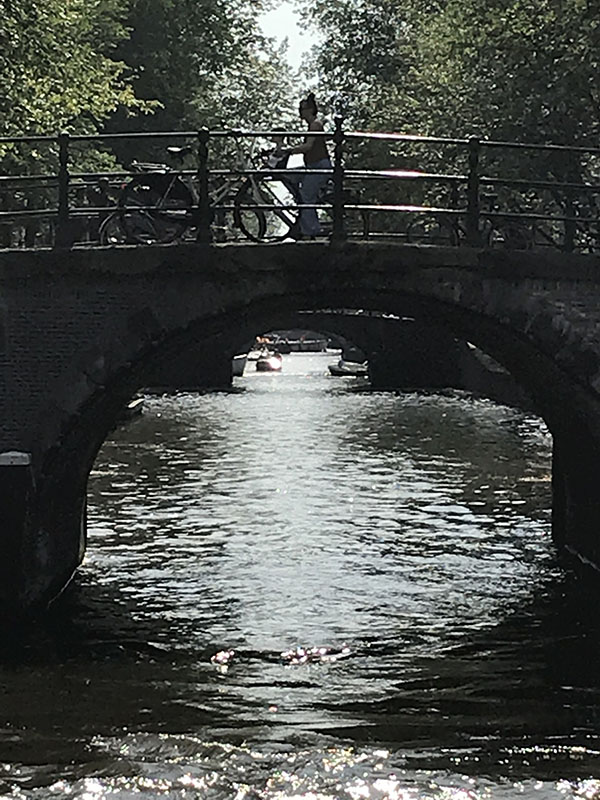 But my head could not handle such views. The bridges could have gone on for ever and ever. I needed some water, but then I found a cafe called Joe and the Juice. It was cool inside, and I liked the names of the drinks. I decided I needed a refreshing smoothie called “Stress Down”, that name just stood out to me. It was made with Aardbei, Gember and Framboos, which I determined was Strawberry, Ginger and Raspberry.

Honestly I have no idea why that combination worked so well, but it felt like a complete power-up. Like in a computer game when you find a floating heart and it restores your health. My sluggish mind and drained body suddenly felt much more energized, and I went outside, pulled out the brush pen, and immediately drew the sketch below, which I really enjoyed. 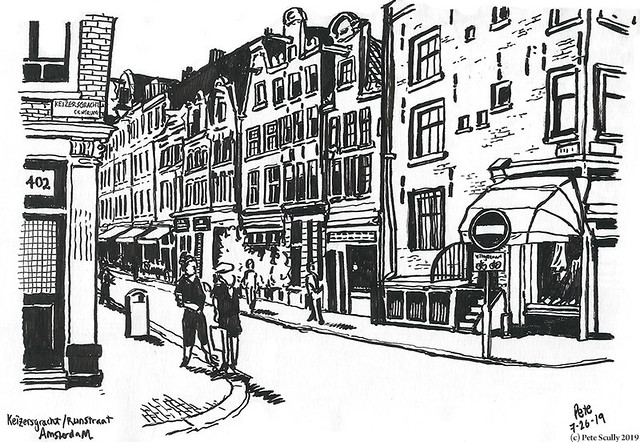 Finally feeling a bit better about my sketching, I went back to Spui and was finally ready for a beer, I met up with Kalina and we met Donald Saluling (first time I had met him in person), and we sat outside a bar filling the early evening with chat and good times. Even on hot days like this, it’s good to all be alive.

Long post this, could have been two. But it’s all one story. The next posts will be really much shorter. Or maybe longer. That day’s sketching was not over, and I did manage another brush pen sketch at a brown cafe, but I’ll save that for another day.