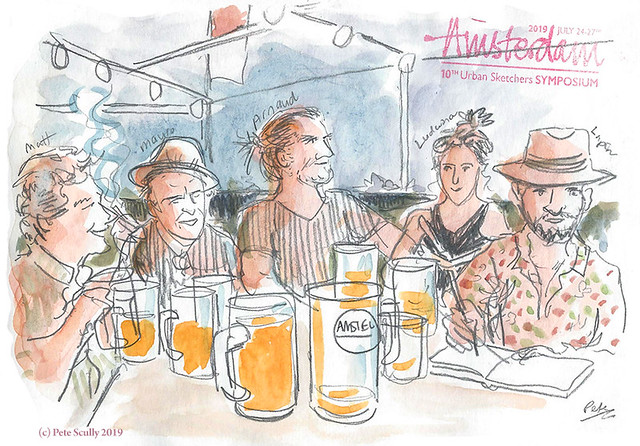 The Urban Sketching Symposium is all about spending time with your fellow sketchers, many of whom are now old friends, especially those who were there at the very start, but it’s also about meeting new people. Often what happens is that you meet people, you are cordial, then you follow each other online and by the next time you see them, they’re like old pals. And of course we sketch each other. Above was a sketch from the first evening in Amsterdam, pay no attention to the parade of massive beers. The light was red, Lapin was sketching me, Matt was talking Italian to Mauro (I’d never met Mauro before, he is Italian living in Luxembourg), Arnaud (on this very hot evening there was no need for us to share a blanket as we had at an outside restaurant in Manchester, 2016) and Ludovina, who I did not know but was also sketching. Amstelhoeck was the place to meet everyone every evening.

Above is Lapin’s sketch of Matt and me, and you can really see the red light we were drenched in. This was not the red light district by the way. Lapin by the way likes to write down things that you say, just anything from the conversations, and they might be random, such as when I was talking about being “better than him at Mario Kart: (I was probably talking about my brother), while Matt said “there is not a middle in 4”. We joked that we would need to save any conversation not for the public for when Lapin went to the toilet! 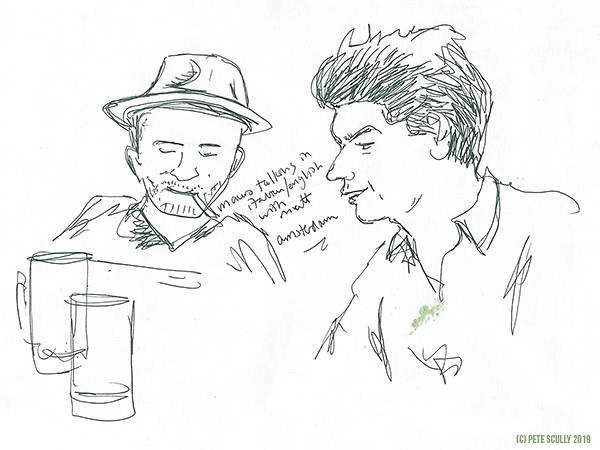 This post will be of the sketches I did of my fellow sketchers, outside of the workshops. Below on the right is Donald Saluling from Indonesia, who I had not met in person but had conversed with (usually about football) over the years, so it was nice to finally meet him. I cannot recall the name of the guy on the left but he was also from Indonesia, nice guy. I was there at a cafe with my Portland friend Kalina after one of the sketchwalks, it was that super hot day where my head had been totally melted by the heat, when I had even left my paints at home. So Donald graciously lent me his (very nice) paints to colour in the sketch. That was a really enjoyable early evening, one of the nicest moments in Amsterdam, utterly exhausted but lots of fun hanging out. 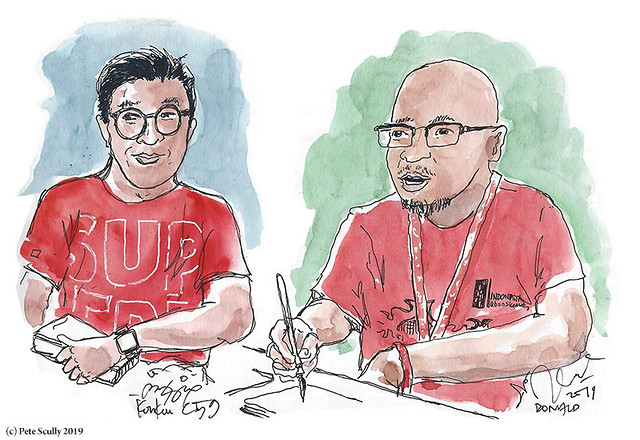 On the final night of the Symposium there was a large final reception, where Amber Sausen (Urban Sketchers president) announced the 2020 Symposium would be…Hong Kong! I had guessed it, and hoped for it, but that it would be in April rather than summertime, due to the heat. Now as I write in March 2020, sadly the symposium has been cancelled, because of the social disruption that was taking place over the second half of last year. Now of course with the ongoing drama of the Coronavirus outbreak, it would probably have been cancelled anyway,  but it’s a shame. So, there will be no Symposium for 2020. Amsterdam however was a big success, despite all the heat, and although I feel quite hugely overwhelmed by the sheer mass of people – when you are knocking closer to a thousand including those that come along just for the sketching, it feels a long way from the more intimate 75 or so of us that were in Portland – I say that every year – I still really enjoyed meeting new people. Below many of us are sat at a table late at night after wandering about Amsterdam looking for a restaurant that would stay open for us, and we found this one Italian place that put a bunch of tables together in the street for us. I love Europe. I tried to sketch all my neighbours, such as several amazing artists whose work I had not really seen before such as Johanna Krimmel, Eleanor Doughty and Jorg Asselborn. Also at the table are Jenny Adam, my Portland friend Rita Sabler, Matt, Arnaud, Mauro, Lapin, Marina, and a few others I can’t quite see. 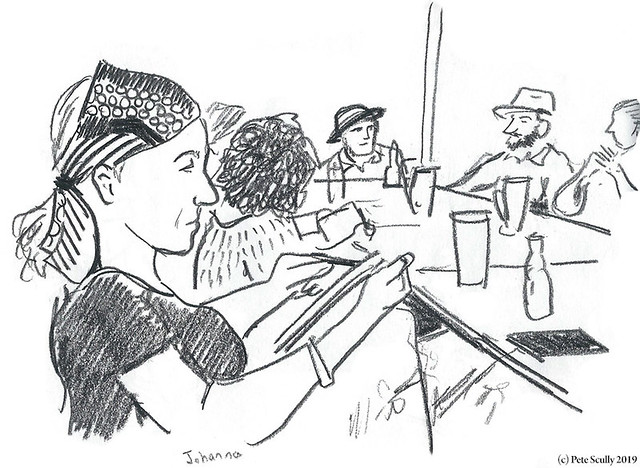 Below are a few sketches from the final reception, the red-hatted Belgian man is Etienne Legrand, who I sketched while waiting in line for a drink. I always enjoy speaking French at these events, I feel like I’m a little bit part of the Francophone sketching world, though as we’ve established my French cannot be understood except in Charleroi, where nobody ever goes. The wild-haired fellow on the right is Richard Briggs, who I had met in Porto, one of the most creative artists I’ve met at these symposia. 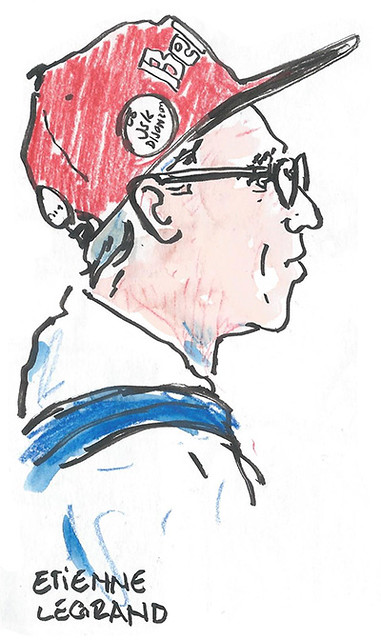 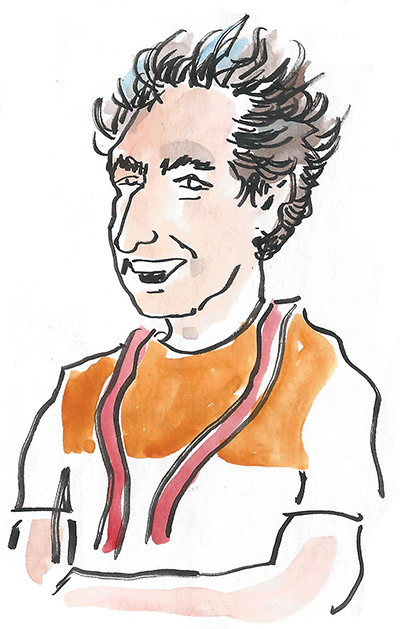 Here he is again with Aurore from Israel, Marina also from Israel (I’m a big fan of hers since the start of Urban Sketchers), and Hugo Costa. 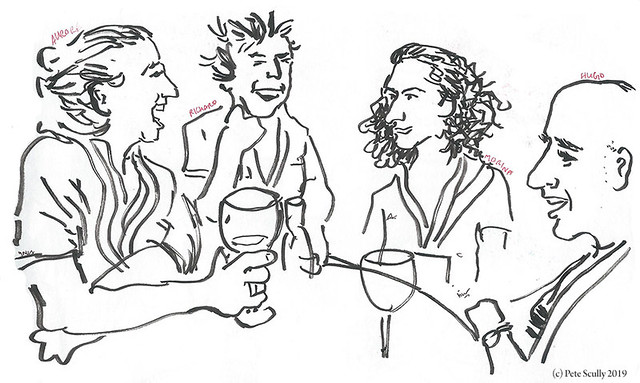 More Amsterdam sketches to come, but these were all the random people sketches I did this time, fewer than usual, but I’m always glad for capturing these moments.

2 thoughts on “Amity and Ambience in Amsterdam”