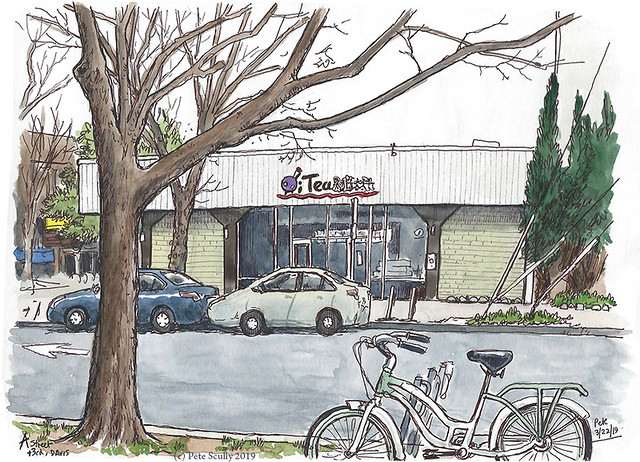 This is A Street, in Davis. Not “a street”, etc and so on.  It’s a corner of Davis I have sketched before, etc and so on. But now, it looks different, etc and so on. I don’t constantly repeat myself, exactly, I prefer to say that I ‘rhyme’. I drew this on a rainy lunchtime, from the shelter of the Social Sciences Building opposite. This was previously Davis Textbooks, on the corner of 3rd St and A St, then it was empty, and now it has been completely refurbsihed and is going to be ‘iTea’ which I think is some sort of chain of boba tea outlets. At least I think it’s a chain, I saw one other, in ChinaTown in San Francisco, the other day. Wait, what, ‘boba tea’? Have I got that right? If so they have missed a trick. A mash-up between Boba Fett and Mr T would be the coolest thing ever. “I don’t hate Solo, but I pity the fool. No man gonna come between me and my bounty.” You can imagine the rest, all of the Boba Fett / A Team stuff, and putting the mohawk on the helmet and those wookiee braids mixed with feathery earrings, you can imagine the whole look yourself, it’s just generally a good idea. But this is getting away from the point, which I tend to do in these blog posts, etc and so on. They have cleaned the place up a lot, and given those bricks a nice lick of green paint. By the way that car, not the blue one but the other one, it looks odd, the front wheel is a bit too far back and it’s very close to the car in front. This is because at the moment when I got to drawing those bits, another car parked in front of me on this side of the street, obscuring my view, so I just drew the top of the car and improvised the rest. Look, a tree in the foreground, my signature. But what is this? A bike? I hate drawing bikes, I said so in the Davis Enterprise last week. Well, there were actually two bikes there, but I chickened out on drawing the second because as you know, the thing I hate more than drawing bikes is drawing two bikes.

This is what this corner of Davis  looked like just a few months ago. Work going on in the street, the old Davis Textbooks sign was still up, the space was empty and someone had done a huge graffiti ‘Class of 18’ sign over the front. You have to admit that looked kinda cool. 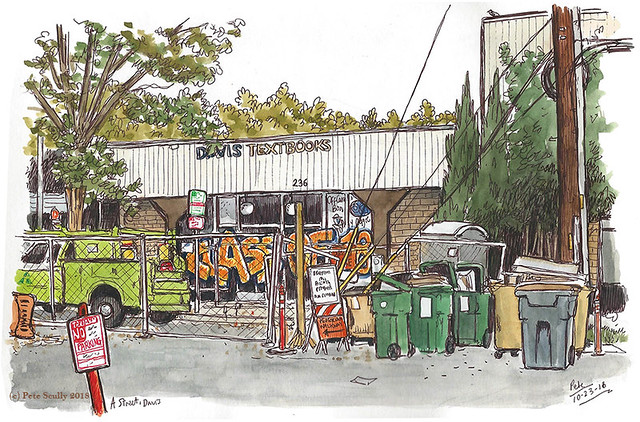 In Spring 2014 it was still ‘Davis Textbooks’, though I don’t recall if it was actually in business. I only ever went inside there once, when my friend Tel from England (who himself sells textbooks online, now based in Japan) wanted to have a look. We used to work for a university textbook shop in Hendon. I liked this corner because of all the signs and poles and urban furniture all about. It’s the entrance to UC Davis, but looking down 3rd Street. Lots of bikes whizz past here. Hey look that same car is there, from the first picture. Its wheel is in the right place. 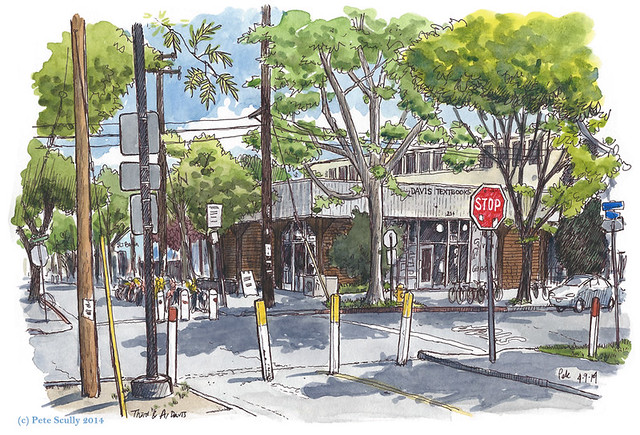 Back when I drew it in January 2008, in the days right before impending parenthood encouraged me to draw in landscape format, I only drew the street corner, with all the newspaper boxes that used to be there. It was a gloriously vanilla January day, with lemony sky and a kind of tarte flambee feel to the world, I have no idea where that is going. I painted the sky yellow before adding the blue is what I am trying to say, it was a thing I did then for some reason, I must have forgotten that is how to make the sky green. 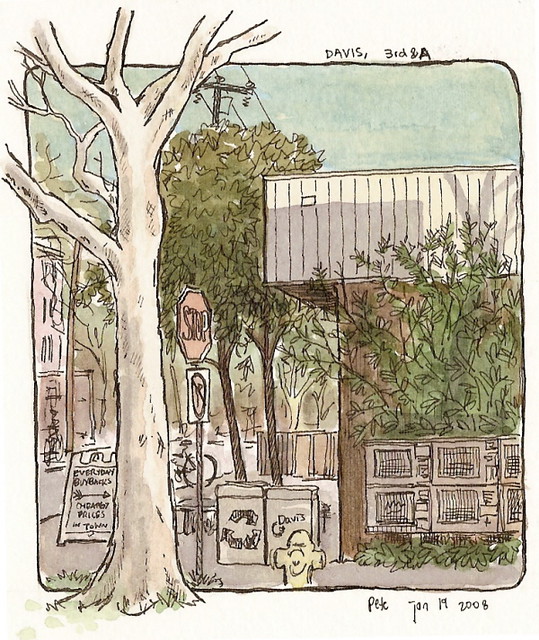 So, another change to another spot in Davis. I’m glad I have been drawing it, and here again is the point of drawing Davis, capturing moments in time as well as space.

2 thoughts on “Rhyming A Street”