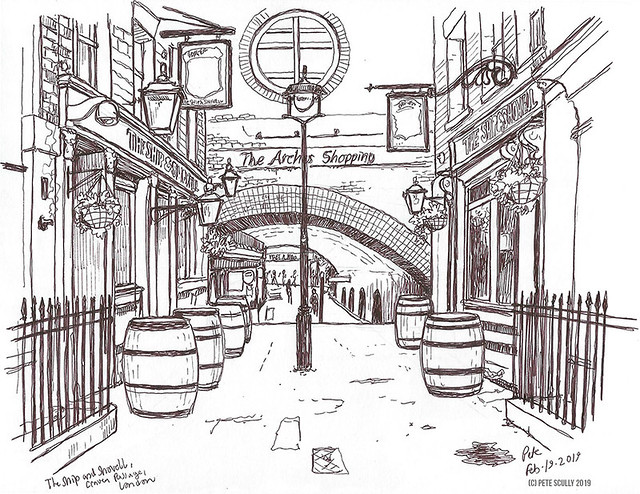 This is the Ship and Shovell pub in Charing Cross, a well-hidden mystery of a pub I had never known existed, like a character in a long-running TV show that shows up and everyone acts as if they had been there all the time. I had intended to colour this in, with its bright red barrels and atmospheric early morning lighting, but I never got time and I wanted to show it to you quickly. These days so many London pubs are under threat and you never know how long they will be there. The Ship and Shovell, not ‘Shovel’, but ‘Shovell’. Probably after Admiral Sir Cloudesley Shovell, his picture is in the sign (I didn’t draw him). The Ship and Shovell is found in Craven Passage, right behind Charing Cross Station, next to a tunnel that leads down to Villiers Street – I had never taken that tunnel before, just assuming it plops out unassumingly into Northumberland Avenue. In fact just a short block further is the Sherlock Holmes pub which I have been to. London is a place that is always worth exploring. Around the corner is the house where Benjamin Franklin used to live, which is called the Benjamin Franklin house, I’m assuming that’s no coincidence. I knew nothing of the existence of this pub – it’s not like I know every pub in London – until I saw a photo recently on one of those historic London Twitter feeds that you follow for old photos and stories, some of them are good. Some of them do attract the overly nostalgic commenters, if you get my drift, the “it was better before all the [insert xenophobic descriptive here] moved in” lot. I left several Facebook groups because of that, my reasoning being “it was better before all the xenophobes moved in”. Most however just like to reveal old London’s historic gems. I assumed this pub was long-gone, another casualty of six-quid pints and predatory property pirates, a blurred photo from the sixties, villains and rakes and lost tourists from Nebraska, “Underneaf the Arches”, “Roll Aht the Barrels” and “Let’s All Go Dahn the Strand”, but no, it’s very much still there, hiding away, having a banana. What is most interesting about the Ship and Shovell is that, as you can see, it’s actually two pubs rolled in one, split down the middle by Craven Passage. It’s joined by the cellars, but otherwise may as well be two pubs. As far as I can tell, one side isn’t the Ship and the other the Shovell, though I bet regulars have their preference. It was too early for me to go in and sketch inside. I left the house at 8am so was sketching this by 9, when people were still on their way to work. It was a bright morning, not very cold, and I was glad to have sought out and found this little red jewel. Some day I will pop in for a pint. Or maybe, half a pint in each side. 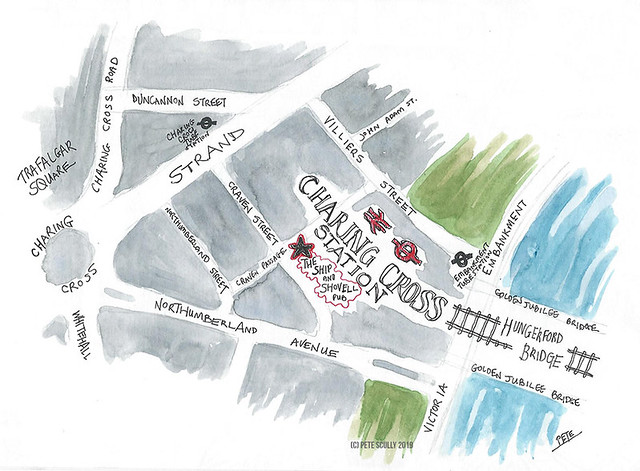 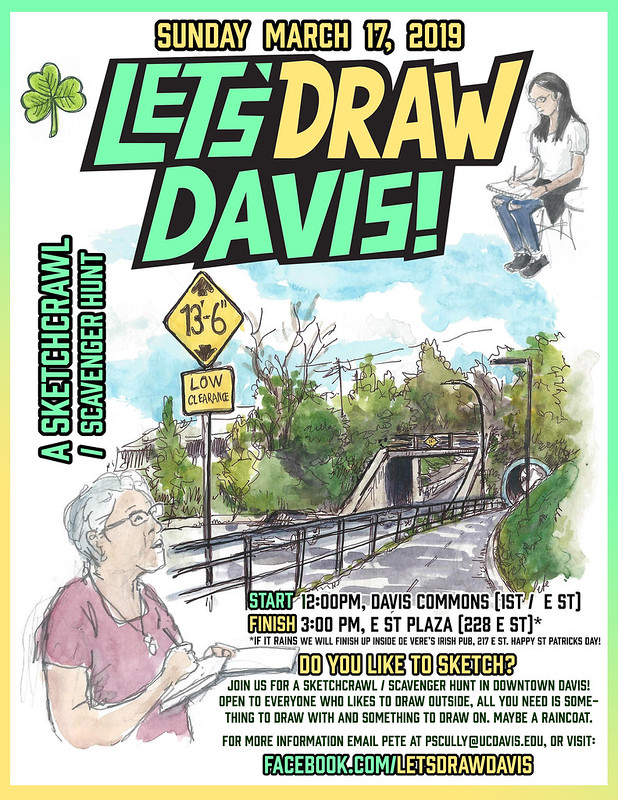 Join us for another sketchcrawl in downtown Davis, California! This one will be a sketch-scavenger hunt too, where I’ll provide a list of things to look for and sketch (optional, you can just sketch what you want!)

We will meet up at the end to look at everyone’s sketchbooks (and get a sticker if you did the scavenger hunt), and then feel free to post your results on our group page at www.facebook.com/groups/383785982124525/

As always this sketchcrawl is free and open to anyone who likes urban sketching. Just bring your sketching materials (and maybe a raincoat..) and an eye to look around at things to draw, and meet other local sketchers who like to do the same!

Oh and it’s St Patrick’s Day so why not draw in green? (I did so on the sketchcrawl last year, a little bit: petescully.com/2018/06/18/like-the-color-when-the-spring-…)

Hope to see you there!!!