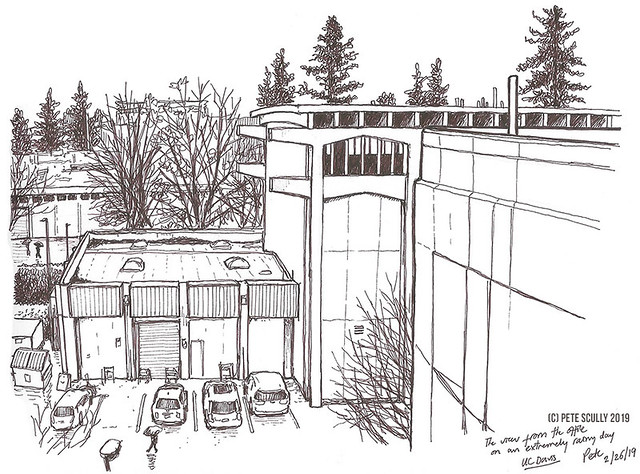 A break from the London sketches, to show a Davis sketch. I’ve not sketched as regularly as usual since coming back, which is common after a trip abroad. I get back to Davis and I’m like, yeah I’ve drawn it all before. However I don’t think I ever drew the view from my office. I have been in a new office since summer 2017, having previously been in a windowless office in the same building. In that office, I had to draw on the whiteboard to pretend there was an outside world. Now I can see what the weather is like. Usually it’s sunny. Lately however we have been having ridiculously wet and stormy winter weather, rain that has been flooding some areas. Many of our soccer games (and this week’s tournament) have been cancelled, causing my son to instead kick his ball against the front door (a lot). Good weather for ducks they say. Not all ducks. Apparently one duck got sucked into the embarrassingly-named Lake Berryessa “Glory Hole” (which I see is referred to as the ‘Bell-mouth Spillway’ by some news outlets, which sounds SO MUCH better). I don’t think the duck made it. When I heard the news I immediately thought of Donald Duck going red and getting angry and making those furious steam-eared Donald Duck noises. What do you think of when you see the headline “Duck gets sucked through Glory Hole”? Actually don’t tell me the answer to that, honestly. The rain was bucketing down as I sketched this, stuck inside on my lunchtime, eating a microwave ready-meal of ‘roast’ turkey. Speaking of turkey, there are these two turkeys that live near our building and are a verified Menace to Society. One of them chased me into my building one morning. I wasn’t going to fight it, I’d look pretty silly fighting this big leathery-feathered bird on the way to work. It was pretty aggressive though. I did that thing where you make yourself look big and say “I’m the boss”, but the turkey was having none of it, and came at me with his huge beak and surprisingly long claws, giving it all that. So I went inside the building and made faces at it through the window instead. It stood there looking at me, trying to be all alpha male (which clearly it was), but I won out really, not being drawn into a battle of talons and feathers, I walked away with my dignity still intact, when that turkey went low I went high, and if it chases me again then I will run away and live to run away another day. Bloody thing. You tell people back in London about these turkeys and they’re all like, “just kill it and have it for thanksgiving!” Like yeah ok, I’ll kill a wild turkey with my bare hands and skin it and freeze it until November, or I could just not do that, and go to Safeway instead and buy a frozen turkey. Infinitely easier. Or they’ll say, “if that was over here,” (and this is in London, not the countryside) “someone” (immigrants is what they mean) “would hunt that and eat it! They would! I read about it in the Sport! They do that to all the geese!” Or they could just not do that, and just go to Sainsbury’s instead and buy a frozen goose. I do like telling people back home about the wildlife around here though, the black widows, the massive birds of prey, the coyotes, the mountain lions (bit rarer here but not that far away), rattlesnakes, bats with rabies, cats with the plague, sharks with jetpacks, trans-elemental spectres, werewolves, and those bees that come together and form a massive giant hammer and stomp all over things. And they always have the same response, “oh if we had those over here,” (in the inner-city housing estates, not like on the moors and fens) “if we had trans-elemental spectres then people” (foreigners is what they mean) “would hunt them for dinner and eat them, it’s true, I saw them doing it, I read about it in the local paper, they ate all the elemental spectres from Grahame Park duck pond.” Or maybe they could just not do that, and go to Lidl instead for frozen trans-elemental spectres.

This story is starting to have very little to do with the weather. Time to ‘rain’ it in a bit (I see what you did there). Anyway, it is rainy and continues to be so. I probably could have added some colour to this, to show that it is rainy and grey, but the small person at the bottom with the umbrella should be illustration enough. And because I like looking back to days of Davis past, below is a small sketch I did from the same building (but from a window further along) back on a rainy day in November 2006. I had been in Davis barely a year back then. I don’t think I had even seen a wild turkey back then, let alone any of the other dangerous wildlife. 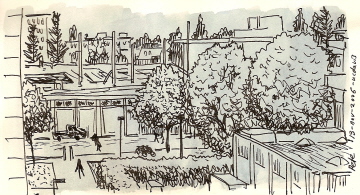 Post-script: It turns out the bird that fell into the watery glory hole was a cormorant, not a duck. Cormorants make bad headlines though. Good job it wasn’t a rooster.