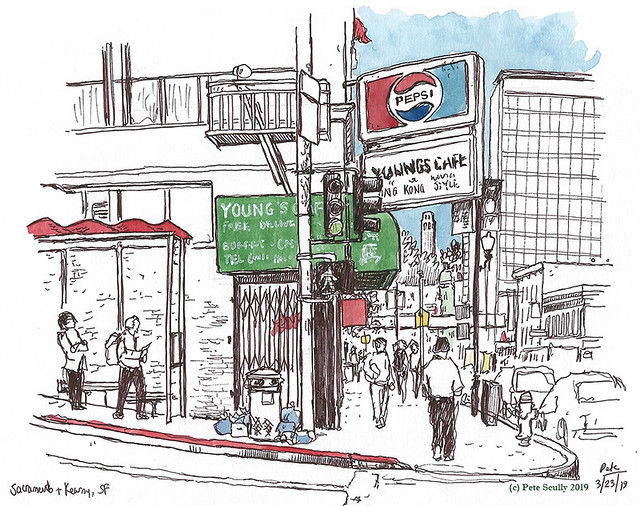 I usually head towards Columbus. It’s my favourite street in San Francisco, cutting a diagonal slice across the grid, leading from the Financial District to the Italian flavoured North Beach. I haven’t sketched a lot of Chinatown recently, but my tired feet didn’t feel like climbing up to Grant or Stockton, so I strolled along the flatter Kearny, and stopped a couple of times to draw the scenes above and below. I was on the corner of Kearny and Sacramento, the long slope of the latter blowing dust downhill and into my eyes. Standing a few feet back shielded me from the wind, and gave me a cheeky view of Coit Tower, waving at me like a prize. I had no intention of going that far this time. 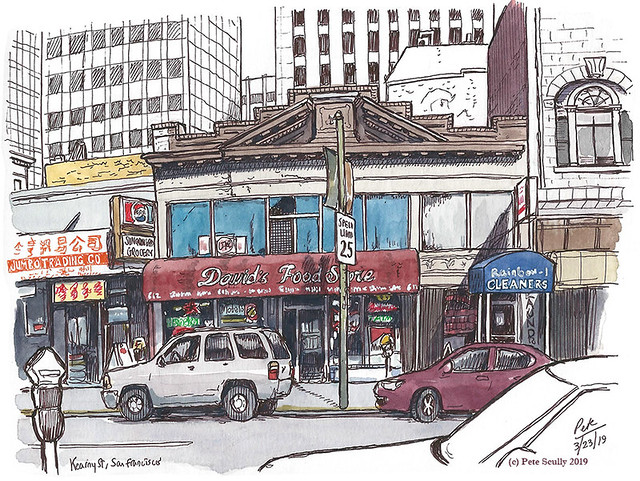 I could not resist sketching the store above. Something about this view just said it all to me. These are the types of scenes I like to sketch the most. I didn’t go into David’s Food store, perhaps David is Beckham, or who knows even Bowie, reborn. Or maybe Cameron, perhaps they have a lot of pork products. But maybe it’s more David as in Goliath, with Goliath being modern expensive San Francisco, and this little food store is holding out against them as the David figure, with long hair that gives him strength, until Goliath finds his weakness in his tendon, I might be mixing up my old stories here. I also didn’t go to Rainbow Cleaners, but I assume that is where Geoffrey would get Zippy, George and Bungle dry-cleaned. This is the silly thing I think about when I sketch. I should be thinking about meaningful pearls, writing travel articles in my head, stories of the smells and sounds of the city, but in reality I’m just daydreaming about Rod Jane and Freddy. At least I wasn’t humming any of their songs! Oh no maybe I was. 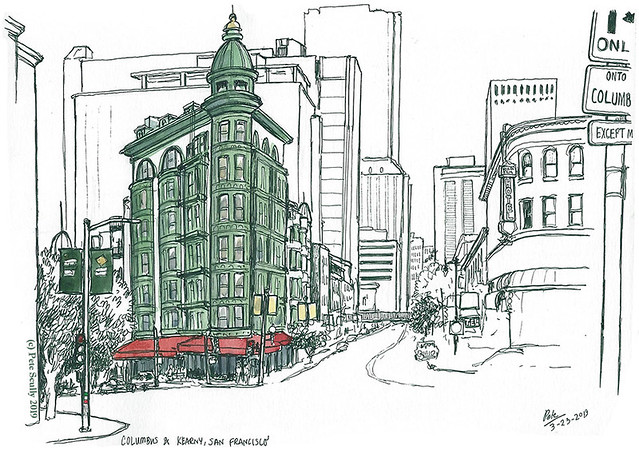 I got myself back on track.This is not the end of Kearny, but it is where it meets Columbus and where it starts getting significantly more mountainous. I have drawn this view before, many times, in fact one of the earliest San Francisco sketches I did was of this building. It’s the Sentinel Building, which has Francis Ford Coppola’s Cafe Zoetrope at the bottom. I’ve not been in there but next time I will. I like Coppola’s films. The Godfather, the Godfather II, all his films. 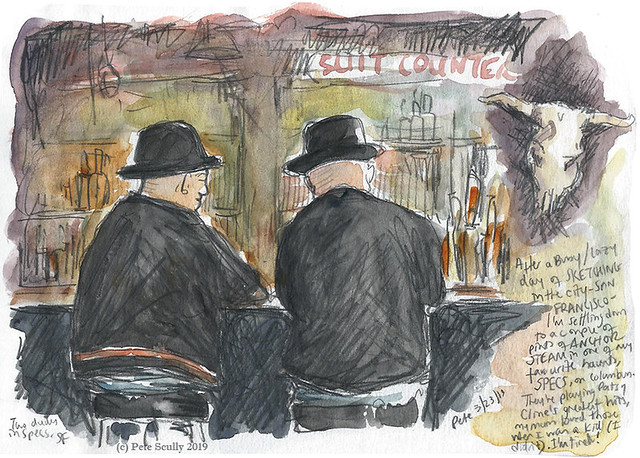 And finally, time to rest. I left the bright late afternoon and walked into Specs, one of my favourite spots in the city. At first I though it was closed, all the lights were off, but it was just much darker than outside and it took a while for my eyes to acclimatize to the dim lights in there. It’s full of stuff, and a few characters. I ordered a pint of Anchor Steam, took a seat with a view and started scribbling in my book. I read for a little (amazingly I could see really well after my eyes got used to it), reading some of those travel stories, and then drew these two fellows at the bar in pork pie hats. Or bowler hats, I don’t know, I’m not a hatologist. I enjoyed drawing this. It’s very different, much more of a reaction to the low light than a line-for-line interpretation; I’ve done that already. I’ve sat on this seat before, years ago at the end of a night out with my friend Simon, we played chess (drunkenly, he drank whiskey and I drank beer). Seven o’clock approached, the long journey back to Davis beckoned. I really love coming to the city, especially this area. I have plans to do a historical sketchcrawl down here sometime in the next couple of months, I have thought about it for a couple of years now. There is a lot to discover. Just around the corner, for example, on the very next day, March 24, City Lights Books was celebrating the 100th birthday of Lawrence Ferlinghetti, famous local Beat poet and co-founder of City Lights. A hundred years old, can you Beat that!