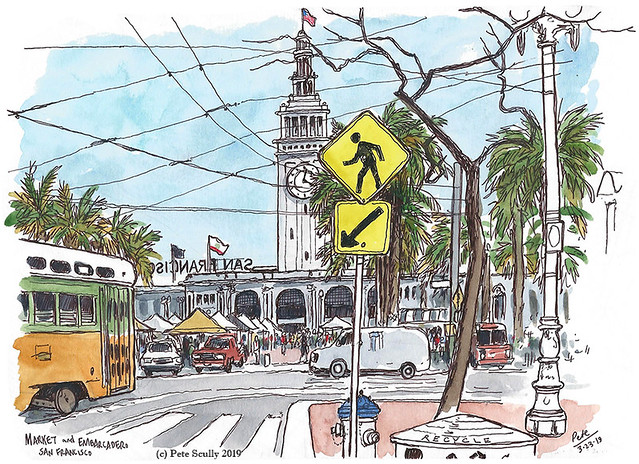 On Friday night, the rain came down hard. My son’s Saturday morning soccer game in Concord, was cancelled. It’s been a wet, wet winter here in northern California. So, instead of having a lie-in, I decided last-minute to jump on a train to San Francisco, for a day of sketching. The sun was coming out. I don’t actually go to San Francisco very often – the last sketching outing there was in 2017! – perhaps I think I have seen it all, it’s a long way to go for a day out without a plan, I’m always left wanting more, and as I get older my feet hurt more from marching around cities as I’ve always done. Then I go, and I remember how different it is from Davis, I remember how much I love true cities, proper urban environments, I remember that I really love San Francisco. This city is changing; it’s changed even since I first started going there, taller buildings are going up, people and places are being priced out of town, but change is inevitable. If cities stayed the same, San Francisco and all its neighbourhoods would not be recognizable as the ones we know today. The scene above, for example, at the corner of Market and Embarcadero looking toward the iconic Ferry Building, looked utterly different until the early 1990s. There used to be an enormous double-decker elevated freeway passing right in front of this view, the ‘Embarcadero Freeway’, a hated blight on the city (read about it on the SF Chronicle site). Built in the 1950s and controversial from the start, the freeway linked both the Golden Gate and Bay Bridges. In 1986 the people of San Francisco were asked whether it should be demolished; voters voted ‘no’ and it stayed up (goes to show, what do the public know). Then the 1989 Loma Prieta earthquake happened, seriously damaging the freeway, and that decided things for everyone. The Embarcadero is a lot nicer now. I started my day at the Ferry Building where I got my little ‘bombolini’ from the lady who sells nice Italian-style pastries, I bought a book of travel stories from the Book Passage, and then I stood on the corner of Market in a nice shaded spot with the my sketchbook. Many of those old streetcars passed me by, some of which originally came from far away, such as Chicago or Milan. This orange and green one used to trundle along the streets of Los Angeles. I took care not to stand too close to the curb, in case buses banged into me from behind, but that was the best vantage point so that neither the yellow sign nor the palm trees blocked the Ferry Building’s clock tower. It’s better than a big elevated freeway. 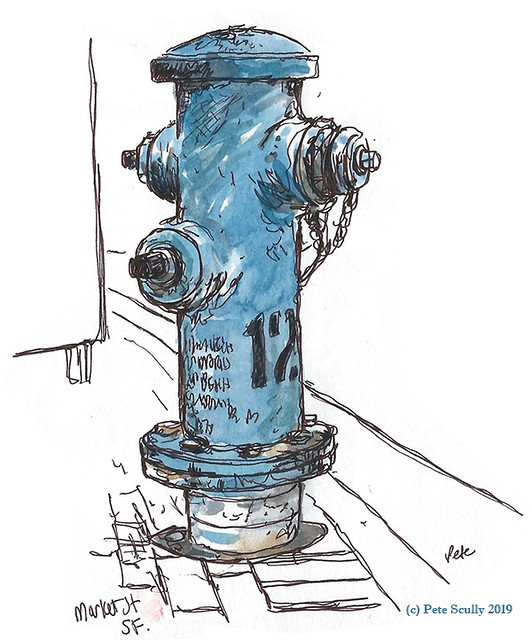 Here is a blue fire hydrant I spotted on Market. You don’t see many blue ones around here. It looked pretty hastily painted. 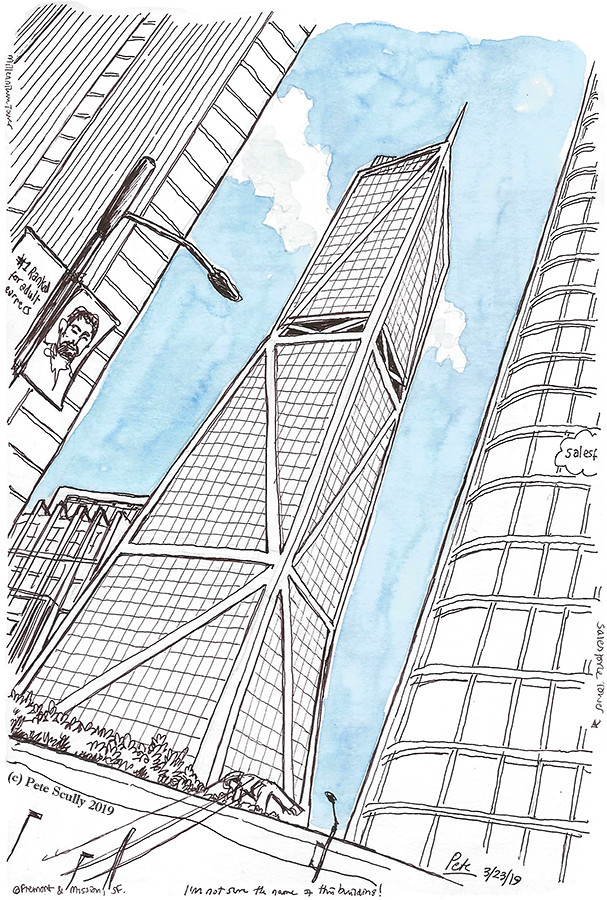 The biggest changes lately though have been the addition of a whole clan of skyscrapers to the are South of Market (SoMa). they are going up so fast I cannot keep up with their names. This one for example took some finding out. The building to the right is Salesforce Tower, the new tallest building in San Francisco which was not quite yet finished when I last sketched it. On the right is the older Millennium Tower (built presumably a couple of decades ago if naming convention holds, though that doesn’t account for the Millennium Falcon, although Correllia probably has a different calendar to Earth, and it was a long time ago and far, far away). I stood on Mission and looked up squinting to draw this. Sunlight reflected from those windows on the Millennium Tower; I was worried I might melt if hit at the right angle, like those cars in London beneath the Walkie-Talkie. I didn’t know the name of this building, it was so new, and it doesn’t appear on Google maps yet. With the whole South of Market Transbay project, new glass and metal skyscrapers are flying up all over the place. The idea of skyscrapers on such earthquake-prone ground as San Francisco was a quiver-inducing prospect until fairly recently, but I guess the engineers are better at solving those conundrums. I discovered the name of this building much alter, after some research online: ‘181 Fremont’. 181 Fremont? That’s it? Not the ‘Upright Protractor’? the ‘Union Jack-knife’? The ‘Alien’s Umbrella?’ I think San Francisco needs to take a leaf out of London’s book and give their new skyscrapers silly and not-particularly-descriptive names. I mean even ‘Salesforce Tower’, what is that? Ok Salesforce might sponsor it but come on San Francisco, come up with a funny name. Perhaps that is what we have lost, as the city changes, the ability for the local humans to come up with plausibly imaginative nicknames for tall buildings. Perhaps they feel, as I am sure Londoners do, that once you start nicknaming tall buildings, you have to come up with nicknames for all of them, even boring ones, and it’s just too much effort. 181 Fremont it is then.