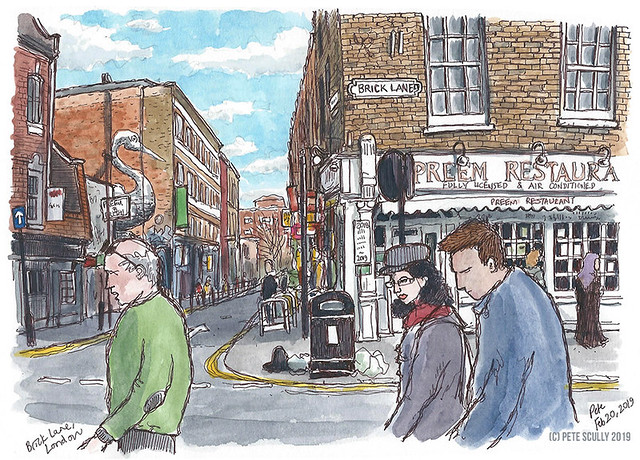 I had to go to Brick Lane. I used to come here twenty years ago when I was a student at Queen Mary, in nearby Mile End, usually after performing in a play, for curry and fairly decent amounts of wine or beer. This time I wasn’t here for curry (much as I wanted some), no this time I was here for Classic Football Shirts. I’ve followed Classic Football Shirts online a for a few years, they sell old football shirts, and last year after they had an exhibition in London I visited their pop-up store in Shoreditch. Now they have a more regular store in Brick Lane, well organized and full of absolute gems. A real treasure-trove of old footy kits, which for someone like me who is obsessed with them is the best thing ever. Most of the really interesting old ones were a bit out of my budget (tempted though I was by the early 1990s Northern Ireland Umbro kit with the weird triangular pattern, and the light blue Spurs 1992 third kit), but I did pick up for twenty quid an Accra Hearts of Oak home kit from Ghana, which I’d been looking for. I like their stripes. Contented with all football kit conversation with one of the guys who run the place, I started to head off back to Burnt Oak, but decided that I could not leave without a sketch. It was a lovely day to be out and about. So I stood on the corner of Hanbury Street and drew. There are lots of artistic murals and colourful shop fronts around here now. I walked through Spitalfields on the way back to Liverpool Street tube, the whole area being very, very different from when I was last here in 2013 for the Jack the Ripper sketchcrawl (it was that long ago? I’m going to have to do a sketchcrawl commemorating the sketchcrawl). And of course, all the new skyscrapers that have sprouted up in the past decade or so, I did one very quick sketch in pencil, and I was going to add paint (not ink) but ended up not doing so. London’s great, isn’t it. I could draw every inch of it, given the chance. 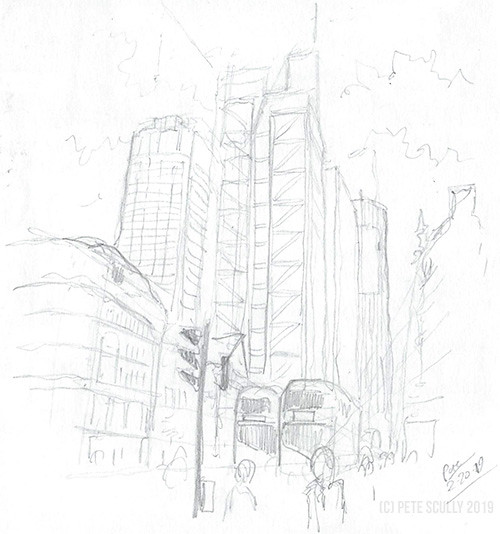