Last Sunday – St.Patrick’s Day – was the day of our most recent “Let’s Draw Davis” sketchcrawl. It was a shortish sketchcrawl, three hours downtown, ending up with a get-together to look at each other’s sketches. This time I included a ‘scavenger hunt’, which was optional, but I gave it a go. It was Ireland-themed, nine things, specific (“an animal sculpture”) or vague (“snakes!”). The weather was lovely, warm and sunny, and lots of people were out. I drew a group of cyclists (a couple of whom I chatted with), focusing on the one of course wearing green. 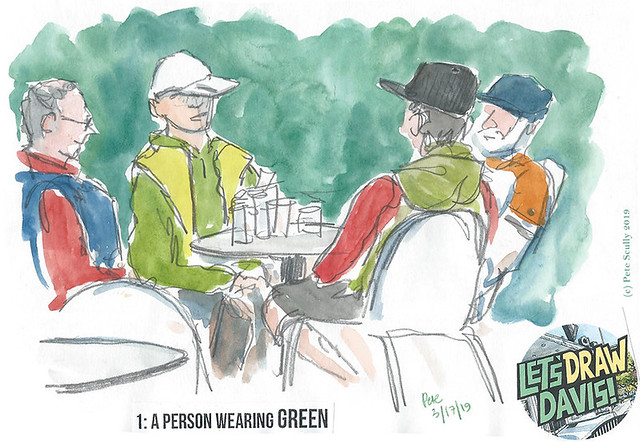 The animal sculpture was easy, as right there on First Street are two enormous animals, a giant dog made of records and a cat gateway thing, outside the Natsoulas Gallery. It’s not a specifically Irish thing, sculpting animals, but not all the list had to be. The dog is called “Roy” and is a tribute to the artist Roy De Forest, by John Natsoulas and others. Becuase I wanted to show some of the detail, the various coloured vinyl records that make it up, I sketched up close, covering the ‘something musical’ point. I used to have some coloured vinyl records, when I was a kid I would sometimes buy them because I liked the colour, not because the music was any good, and I’m guessing those who donated these probably felt the same. Speaking of not-good music, that awful violin player was downtown again, his screeching echoing down E street. I wasn’t drawing him, no way. Sketching the records was a little bit of a challenge as I don’t like drawing circles (it’s why I hate drawing bikes), but also the sun was beating down, so I added the colour once I got into some shade. 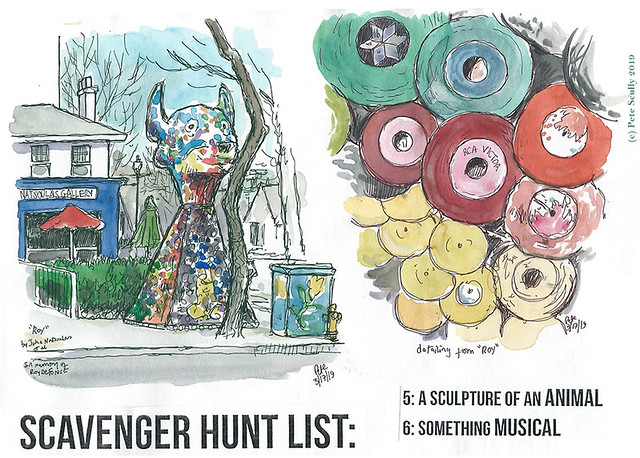 Below is fellow Davis sketcher Alison, who has been sketching Davis much longer than me and who I knew from the very earliest sketchcrawls. She found a great display of Irish books in the window of Logos Books on 2nd Street, so I sketched her sketching those (the bookshop was my ‘something to do with literature or poetry’), and then I drew one of the books myself, a children’s Irish legend book about St. Brigid’s Cloak. I don’t know enough of the Irish legends myself, despite my Irish family I never learned any of that stuff as a kid (my mum just played Wolfe Tones, Brendan Shine and Daniel O’Donnell a lot), in fact it was my son who told me the story of the Red Hand of Ulster back when he was a preschooler (gory storytime!), though I did like reading about the Fomorians and the Tuatha De Danann, Balor and the Evil Eye, that stuff.  And I loved hearing the story of the Rock of Cashel and Devil’s Bit Mountain when I went there as a kid (Cashel is full of Scully gravestones actually, that always excited me). And I know about St. Patrick of course. There’s a whole wealth of story and mythology I need to read about. 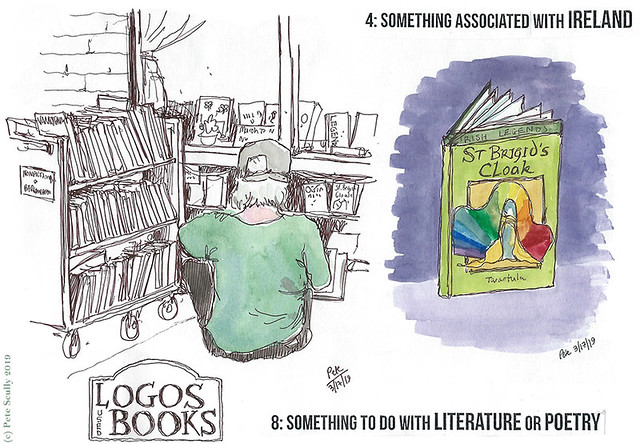 “A green object in the street” for me was a street sign. It could have been anything, a tree, a bin, a bike, a bush. I also asked for something more than a hundred years old, and that required a bit of Davis knowledge. I said not to draw my jokes which are all about a hundred years old (including that one). I drew part of the Dresbach-Hunt-Boyer mansion, which dates from the 1870s. 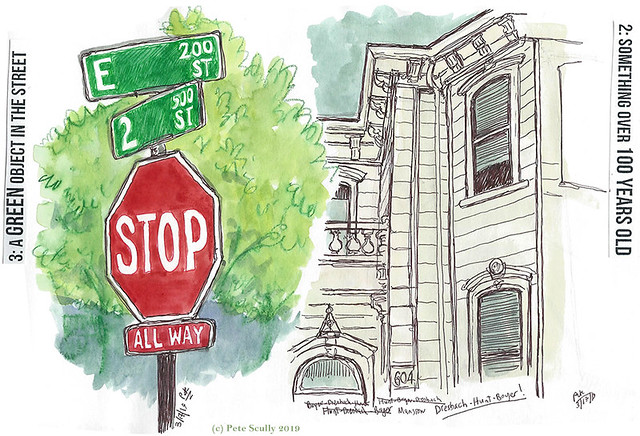 Now ‘snakes’ was always going to be interpretative, as I don’t expect to see a lot of snakes slithering around. We do of course have snakes in Davis but they like to hide, and don’t often go downtown, especially on St. Patrick’s Day, for obvious reasons. I knew there was a green metal snake sculpture behind the Pence, however it is no longer there, so I ended up drawing some metal pipes, and calling it “snakes”, and there you go. 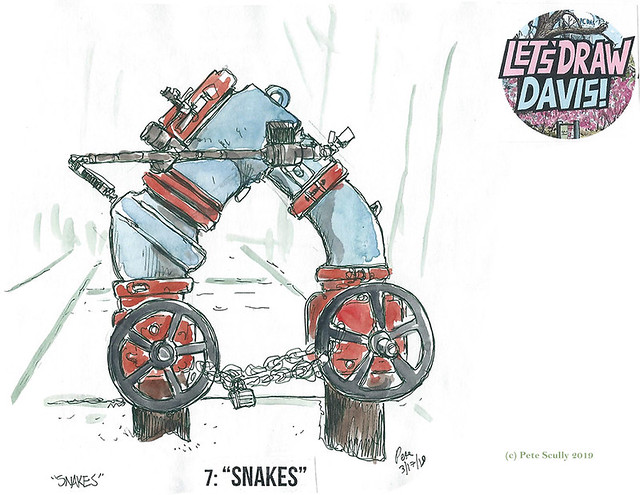 And the last one “DRINK!” is a reference to Father Jack’s favourite word. I had about twenty minutes before the end, so I popped into De Vere’s Irish pub (which was packed), remarkably found a seat at the bar with a great view of the Guinness toucan that had been perched up above the taps. I drew that and had a (quite marked-up) pint of Smithwicks in a plastic glass. I don’t really like drinking Guinness much myself, it’s alright but not really my tipple. And then it was time for the final meet-up with the rest of the group. we had a very good crowd this time around, and I can’t wait for the next one in April! We’ll announce when exactly that is very soon. I have some soccer game rearrangements that are still being figured out, but I’m really in sketching mode this year – I’m already months ahead of my 2018 sketch-count. 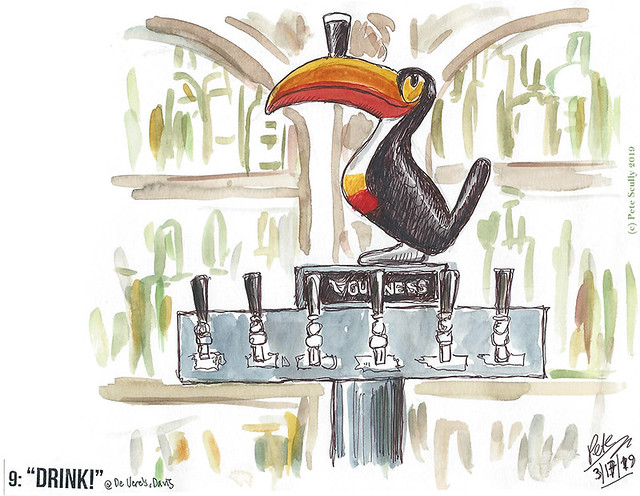 I never learned much Irish, except a few choice phrases, so the blog title today is a little bit of Google Translate finagling. I quite like bad translation though, there’s a certain comedic innocence to it. We used to play on that in our multi-lingual theatrical performances back at university. I did have a book when I was a teenager, ‘Teach Yourself Irish’, but it was a ridiculously dry edition and put the language out of reach. I could see how it connected to other European languages, but the orthography-to-pronunciation difference was too great for me to hear it in my head, so I just learned a few words and phrases, mostly ones other people had taught me (so I could say them). None of my family ever knew any Irish phrases other than Erin Go Bragh, Cead Mile Failte and Pogue Mahone, the last one being spelled the way the band did, not the spelling I was taught later by Irish people. None of the Irish people I knew as a kid (who were pretty much my nan’s generation) spoke any Irish words, so even as the historic language of my ancestors I never felt much of a connection to it. If they learned it, it was something they might have had to do at school decades before and forgot instantly, same as I remember very little about Chemistry class except a dislike of Bunsen Burners. I do remember when I was about 12 though being somewhere in rural Kerry, and suddenly everything was in Gaelic, the radio stations, the street signs, actually that was it, the only other things around were sheep and fog. It wasn’t until I was much older that I met someone who spoke it natively, as in at home, and whenever she used it to with us it was usually in song and not to be translated (she was clear about that). So, with the Irish language, it’s another thing that I might get around to learning a bit of now we live in the YouTube era, but might not be that high on the priority list living out in California. Anyway I hope all my Irish friends had a fun St. Patrick’s Day! I certainly did.

Hey, if you want to see other people’s sketches from the day (or post your own from the sketchcrawl, if you came along) you can go to the Let’s Draw Davis group page on the dreaded Facebook: https://www.facebook.com/groups/383785982124525/

To find out when future sketchcrawls will be, our main FB page will show those: https://www.facebook.com/LetsDrawDavis/