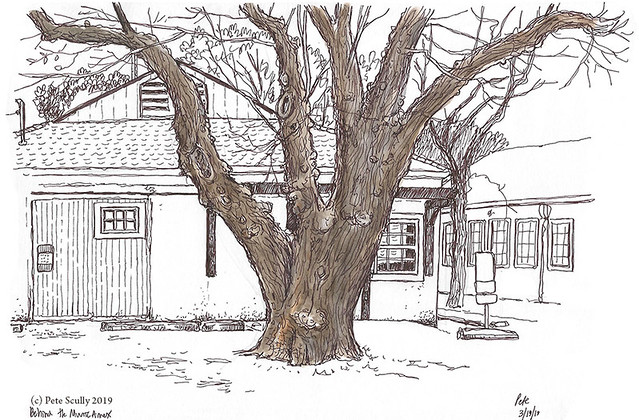 This gnarly, knobbly looking thing is behind the Music Annex at UC Davis, next to the back alley that runs alongside the Arboretum. It looks a bit like an ancient sea creature that has broken through the deck of a ship, only to be cast under an ancient spell and turned to wood (lignified?). I needed to sketch at lunchtime, so I sketched this. Trees are beautiful, aren’t they. The uglier, the more beautiful. I used to like climbing trees as a kid, but I’d never climb very far, just to maybe the first branch, and I’d feel like a tree-dwelling champion. I was a big fan of the Ewoks when I was a kid, and always wanted to live in a tree-top village. I never had a tree-house, though I did have a climbing-frame in my back garden with a little metal swing at the top, it was less like a tree-house and more like a birdcage, but I loved it. I wish I had had a tree-house though. I didn’t have a tree though, so there was that. What would be cool would be to have not a tree-house but one of those houses which is just a door in a tree-trunk, and you open it to reveal a spiral stair-case going down, down, down into a subterranean world. I was a big fan of Mr.Happy when I was a kid. Jamie and the Magic Torch as well. Hang on that wasn’t a door in a tree, I’m not sure why I thought of that. Anyway the problem with that would be lack of sunlight, and it’s not really a tree-house any more and just a cave, and I don’t want to live in a cave. Unless it’s accessible by fire-pole. I was a big fan of Batman when I was a kid. I think every house needs a fire-pole, really. Coming back to this tree though, you have to wonder how much of it has been shaped by its proximity to the Music Annex. Trees are alive, they can experience and feel, and perhaps the presence of all that music has made it feel more alive and expressionist than trees next to, say, the Mathematical Sciences Building. (By the way I can vouch that those trees are generally very good with numbers). Or maybe all that music has warped its personality in the same way that listening to hours and hours of sad pop songs can make you eternally miserable, like the guy in High Fidelity? Maybe this tree is a music snob, and only listens to tree music you haven’t heard of. Or maybe, just maybe this tree is angry and frustrated, knowing that so many instruments being played right there, right on his roots-step, are made of wood, his dead friends, his dead relatives. All those woodwind instruments like the oboe and the clarinet, all those violins, cellos, even pianos, guitars, ukeleles, xylophones, they play such bitter notes when you are a tree. Or maybe they see it differently, maybe trees are proud that their kind can produce such beautiful sounds. Or maybe, and this is more likely I’ll admit, maybe it’s just a tree and it couldn’t give a monkey’s.

2 thoughts on “and as in uffish thought he stood”