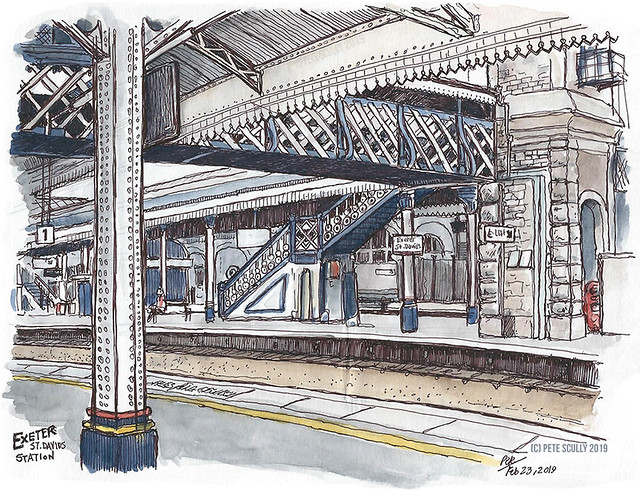 “Exit from Exeter”. That is really not a very relevant title. I just really wanted to use the word ‘Exit’ in the same title as ‘Exeter’. I scratched ‘Exiting Exeter’ because it could be misread as ‘Exciting Exeter’, and who am I to judge? I was only there for about 50 minutes, and I never left Platform 1. I wasn’t really in Exeter long enough to be really Exiting. ‘Departing from Devon’? I had taken the train from Barnstaple, and changed here at Exeter St. David’s for the train back to London. There was an Exeter rugby match happening that day, so there were several fans on board the train across Devon. I knew that I could get some sketching time in at the station while I waited, so I picked a spot and drew. It’s pretty standard classic English railway station stuff. I like travelling by train, and my journey went well. I actually did the colouring-in while on the train, reserving a table seat ahead of time. I would like to spend a bit more time in Exeter if I came back here again, maybe just a couple of hours to draw the cathedral, which I hear is quite nice. I do like drawing cathedrals. I have a dream to travel the whole of England, drawing all the cathedrals, and then go to France and do the same. I wanted to get back to London though, to pack my bag for the flight back to California. I was in Paddington by the late afternoon. Stepping onto the Paddington platform, I was struck by how cathedral-like it was. Maybe I should draw the railway stations of Britain. I’m sounding like a trainspotter. I already look like one.

One thought on “Exit from Exeter”