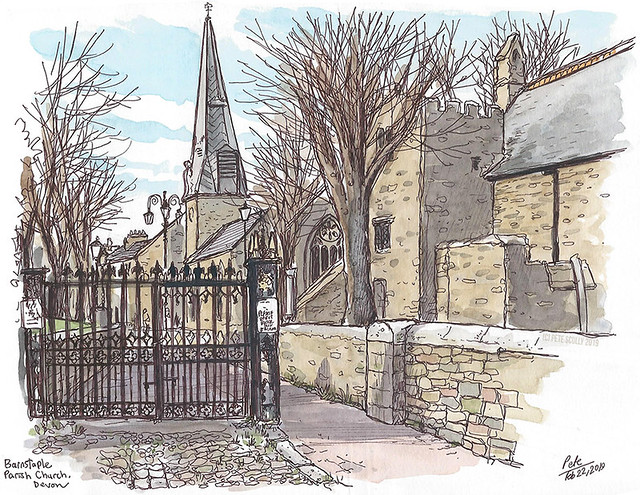 I went to Barnstaple with family to see family, an almost six hour drive to the West Country. I like Barnstaple, all of the shops are close together, and if you need a pair of socks urgently you can just walk to a shop a few minutes away and get some for a quid (unlike in Davis). Yes it was the same shop I bought four Topics for a quid. By the way Americans if you don’t know what a quid is, it’s a pound, the UK currency, not the unit of weight. I say ‘quid’ a lot. In America I say ‘bucks’ a lot. By the way it’s never ‘quids’, you don’t say “seven quids”. Oh except in the phrase “quids in”, which means…ok let’s get on with the drawings. I was up early, having beaten my brother at MarioKart the night before in the hotel room (just wanted to point that out), and I like to wander about having a little walk. The sketch above is Barnstaple Parish Church. The church dates back to Saxon times over a thousand years ago (England is well old, folks), though none of that building survives. The present church is much newer, having been built just recently, in 1318 (the spire is even newer, having only been put up in 1389, which was pretty much just the other day). Some more building was added in the 1600s such as the Dodderidge Library in 1667 (it’s hard for a Londoner to see a building dating from 1667 and not assume it is just replacing one destroyed in the Great Fire of London, but it didn’t quite reach this far, hundreds of miles west). The spire of the church has a twist – it was a ghost all along. No, not that sort of twist. It was struck by lightning in 1810, but the twist is that it wasn’t the lightning that twisted it at all, but centuries of sunlight on the lead and wooden frame. Apparently George Gilbert Scott (the grandfather of Giles who built Tate Modern, Waterloo Bridge and designed the red phonebox) was asked to renovate the church, but he refused to fix the twist, because he said that “if you know Bruce Willis is a ghost all along it ruins the tension of this otherwise unwatchable film”. By the way if you ever travel back in time to 1810 and get stuck, at least you know you can generate the 1.21 gigawatts of power to get home by hooking up a cable to the Barnstaple Parish Church spire. 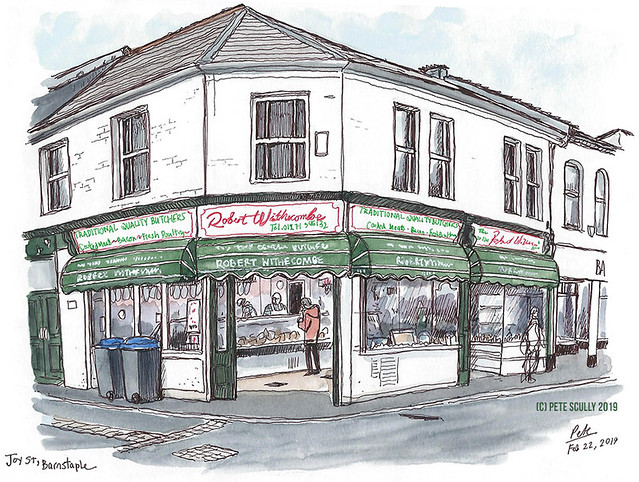 When I first came to Barnstaple last year to visit my uncle Billy who lives here, I saw this really interesting looking butcher’s shop in Joy Street. I determined that I would sketch it when I came back, so I did. I could never be a butcher. I would just be doing ‘meat’ puns all the time, like “nice to meat you!” and “it’s bacon hot today!” and “gammon have a go if you think you’re hard enough”. See, I’d be really bad at it. Master Butchers are very skilled at what they do. They really know their meats. They know all the meats. Beef, Lamb, Pork Pies, all the meats. It would take me ages to learn all the meats. Across the street from here is an art shop called the Blue Gallery, so I popped in to have a look around. Lots of nice art supplies. They also had a copy of Matthew Brehm’s perspective drawing book, I have quite a few sketches in that one. These were the only sketches I did in Barnstaple this time, but my ones from last year are in this post: https://petescully.com/2018/05/19/barnstaple-devon/ . Devon’s nice. I came to Devon when I was in my teens a few times, and always thought I would come back more as I grew older, but never got around to it. It’s a big county, with lots of places to discover. Devon is old country. When you are out on the windswept moors time is almost irrelevant. Unless you are sentenced to Dartmoor prison, when time becomes a thing you do. I always liked the ghost stories from the moors, like the Hairy Hands of Dartmoor. Seriously, the Hairy Hands of Dartmoor. That is an actual ghost story, look it up. It sounds like a Dr. Strange incantation. “By the Hairy Hands of Dartmoor!”

One thought on “Back in Barnstaple”