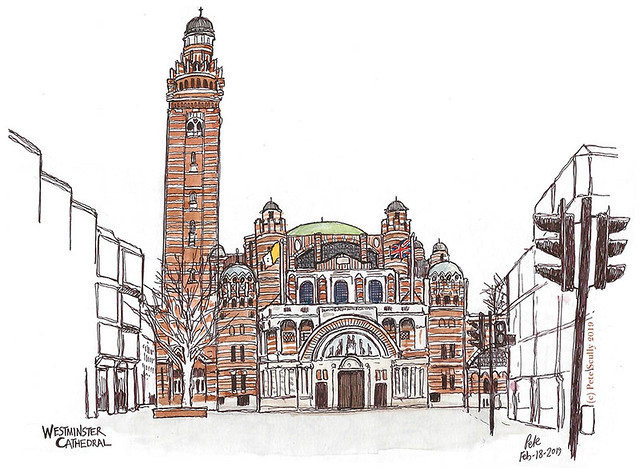 The only rainy day on my visit back to England was the day I dedicated to doing the most sketching, but I don’t mind the rain, and I wanted to explore anyway. A slightly later start than I had wanted (due to waking up super early – jetlag – after a night out seeing an old friend in Borough – hangover – meaning I stayed in bed trying to get back to sleep a bit more, rather than dashing out at 8am to sketch every inch – or centimetre – of the city). I wanted to explore Victoria – the area not the person – and maybe draw a map of the neighbourhood showing people all the interesting things to sketch around there. I haven’t drawn the map yet, and in fact Victoria has changed a lot since I last spent time around there, which was almost 20 years ago when I was a tour guide based out of there. It’s really different there now. I don’t know what has happened to New Scotland Yard but it’s an empty building site now. Lots of modern buildings have risen up. One building I have always been interested in but never sketched nor been inside was Westminster Cathedral. My old tour bus used to swing past this building while I gave a courteous nod to the recent history of Catholicism in England, on the way to (or was it from?) the much more illustrious and ancient Westminster Abbey, further up the road (which is not technically a Cathedral but a Royal Peculiar, our highly knowledgeable tour guide instructor instructed us to say. Regardless, only one of these buildings gave the City of Westminster its name and it wasn’t stripey boy here). I stood opposite Westminster Cathedral, in the light rain, my London Underground umbrella firmly stashed inside my jacket hands-free, sketching in the Stillman and Birn Alpha book. The tower had to be squashed ever so slightly because it’s actually very tall, but you wouldn’t notice unless I tell you, so I’ll keep quiet. I like the stiripes; some of the older buildings around the back of it have similar horizontal stripes either in mimicry or as a survival instinct to blend in; it’s nature’s way. The long name of this building is the “Metropolitan Cathedral of the Precious Blood of Our Lord Jesus Christ”. Or “No not Westminster Abbey, the stripey one around the corner”. It was built in 1903 out of brick with no steel reinforcements, none of your steel reinforcements, proper brick done properly. The flags waving above the entrance are that of the United Kingdom and that of the Vatican City. The domes and curves brought to mind the St Mark’s Basilica in Venice, but less glitzy. I had never been inside though, and so after a sandwich from Boots (Meal Deal of course – I love the Meal Deals in England) I went in and had a look around. I was very impressed, there was a lot to see and it had a fair bit of glitz itself (it’s the big Catholic church of the country, you need some glitz) such as golden neo-Byzantine mosaics, but most exciting was that for the tidy sum of six quid I could go up the tower. 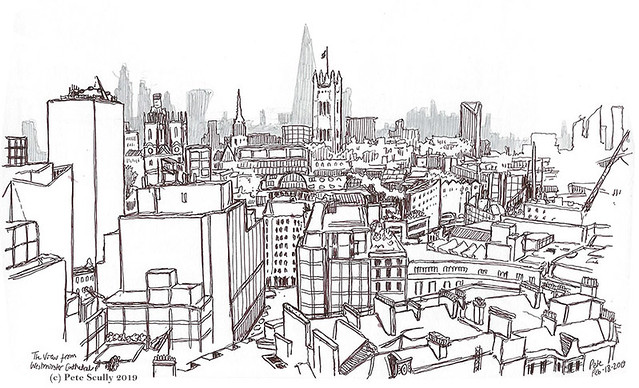 “It’s very foggy today,” said the man in the gift shop who operated the elevator,  “you won’t see much.” Oh I don’t mind that, I said, thinking it might make drawing a bit easier if I can’t see all the details. It was a really good view (for six quid it had to be, but it supports keeping the elevator open so I’m all for it), and the wind did blow some of the rain in towards me, I stood pretty sheltered and draw as much as I could. The growing pattern of skyscrapers in the distance was a ghostly silhouette, dominated by the Shard. The Palace of Westminster’s Victoria Tower stands tall in the middle, and just behind Westminster Abbey you can see Big Ben still covered in scaffolding. I enjoyed drawing this so much. There’s nothing like drawing a city from a high perch, and I did it again a couple of days later at the Tate. If you like perspective drawing this is like a dream job. When I was done, I wandered about the streets of Victoria for a bit more, before heading back over towards the shops of Covent Garden. It’s times like this when I feel such an affection for London, the unbeatable metropolis that can never be completely discovered. I’ve always liked this building but never been in, and now I have.

One thought on “Westminster Cathedral, stripes and domes”