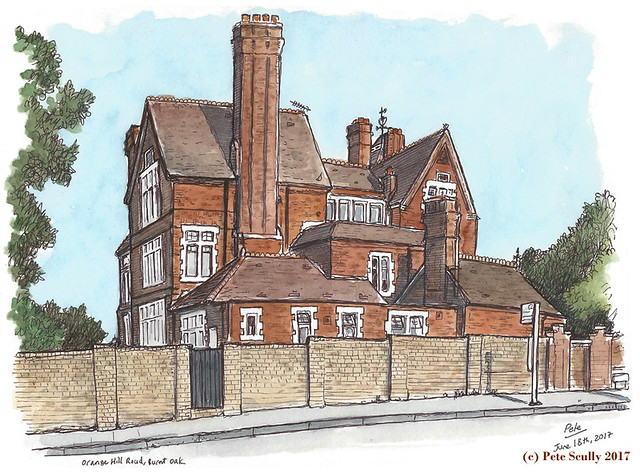 This is another very early morning sketch from back home in Burnt Oak. It was Father’s Day, and I was up super early so went out for a walk in the early morning June sunlight, when hardly anyone was around. The light was golden and heavy, rising beyond the Mill Hill end of Abbots Road, while I stopped at the Orange Hill end and drew one of the more impressive local buildings, the old Orange Hill Convent. Look at that chimney! That is a serious chimney. I remember the nuns, coming up and down to Burnt Oak, and I was told I had to greet them with a “Hello Sister” (not “Hello Nun” as I had been doing up to that point). Many years ago this was next to St.James’s School, the local Catholic school that I never went to (what with not being a Catholic), but would have been handy (being only two minutes from home; my actual school Edgware was a much further walk, and I did it daily – and slowly, as my old teachers will attest). My younger sister did go there, but only after it had relocated to Grahame Park. I remember friends of my older sister though who did go the St. James’s (my older sister by the way went to Orange Hill, just around the corner, which is also no longer there), they used to talk about St.James’s purely in terms of their terror at the nuns next door, Oh the nuns, so strict, the nuns! Which I never believed, having only met the nice sweet nuns going up and down the street, and saying “Hello Sister” to them, and they would say “oh hello young man” back. But then, I wasn’t a Catholic.  Pupils at St. James’s wore uniforms of two different colours – black and grey for the boys, green and yellow for the girls. It’s funny living in the US now and high school kids not wearing uniforms. We could always tell where kids were from by their uniforms (which was exactly the point, I think, for when kids from different schools got into trouble, as was not uncommon – trashing a McDonalds, running rampage on a bus, throwing things (or people) into people’s gardens – then the head of that school could be contacted and the boys or girls would get into trouble and very pointed words would be had at the school assembly next day. Yeah this happened a lot at Edgware (not by me of course). Our uniforms were blue, white and maroon. Our rivals at Mill Hill Country High had similar uniforms but had cherry red instead of maroon. There was one Catholic girls school who were kitted out all in purple, in Finchley if I recall, and were nicknamed locally “the Purple Virgins”. Not by me, of course. I always loved how tall and imposing this building was, on those dark early evenings when the rain was lashing down it would appear like a haunted mansion out of the gloom. I do remember as a kid though, my friends and I would go to the field behind it, next to the Watling Community Centre, to get conkers from the big horse chestnut tree. We’d look around for those big green spiky balls, peeling them open to find a huge shiny conker inside. Now I know this sounds like something that mawkish sentimentalists will post on groups on Facebook, oh remember when all we had was conkers, not like now where it’s all video games and obesity and violent crime (you know, the sort of Facebook post with a comment thread that quickly turns xenophobic, regardless of the original subject), but this is in fact true, we did go and get conkers from a big tree just behind the convent. I was a pretty innocent kid, it has to be said. It was all football stickers and conkers. And video games to be fair, my brother and I spent a lot of time playing Donkey Kong. I did go to karate class a couple of times in the building next to this, but I gave it up because there was another boy from my school, who I think fancied himself as a bully, in the karate class one time when I was 11 or 12 and he just spent the entire time laughing at me from behind and making disparaging comments. He then followed me down Orange Hill trying to talk to me, not in a particularly menacing way, but I didn’t want to talk to him, and I knew that next day at school he would basically have all his cronies humiliate me for attempting to do karate. So I never went back, which was a bit of a shame. Kids eh. I would probably have been rubbish at karate anyway, but I do think of that when I see that wall in front of the convent. Here I go again, memory lane. Well the school building is gone, replaced by houses and flats, I don’t know if the chestnut tree is still there but I doubt kids are picking its conkers, in these days of violent obese video crime games, and it’s probably too late for me to go back and try my luck at karate now, but the outline of this old Convent still stands out at the top of the hill like always. And finally, I sketched it!

12 thoughts on “the convent at the top of orange hill”