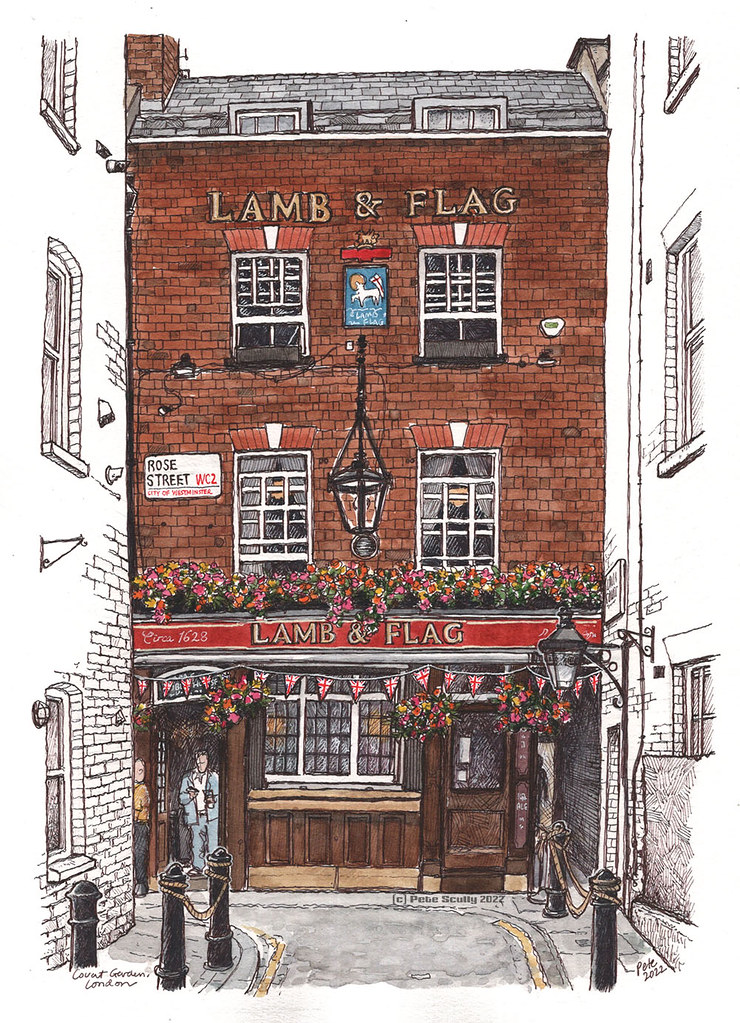 Here are a couple more drawings I did last summer, not on location but from photos I took while in London. I always want to draw as many old London pubs as I can, so I drew these two on big pieces of paper, and in fact the top one sold at the Pence Gallery’s Art Auction in September. It’s the Lamb and Flag, a popular old pub near Covent Garden off Garrick Street. I’ve been there a few times myself, though more often I pass it by when slipping through that alleyway on the right (Lazenby Court) to get up to Long Acre (via Floral St and another alley) when I’m on my way to Stanford’s map shop (which has now moved around the corner). There’s been a pub on this site since at least the 1770s, and it took the name Lamb and Flag in 1833, although the brickwork is from the 1950s, replacing an older building from 1638. This is what their website says, although the sign outside says ‘Circa 1628’ so who knows. Actually to confuse things further the sign actually says ‘Circa 1623’ but my eyesight is circa 1976 and therefore prone to get things wrong from time to time. The 3 looks like an 8. See also, whatever the hell is going on with those window panes. Whichever date is correct, doesn’t really matter, it’s a nice pub to stop into for a quick pint while out walking about London. The one below, the Brown Bear in the East End of the City, on Leman Street. It is one I’ve never actually been to, but I passed by it while walking from Aldwych to St. Katharine’s Dock back in the summertime, and I thought, I’d like to draw this, but I’m on my way somewhere else right now, and it looks like it might rain. So I filed it under ‘draw larger when I get home’. I definitely prefer drawing on site though, for some reason my eyesight works better outside in normal (preferably overcast) light than it does sat at my desk with the artificial desk-lamp light. This east-end drinker dates back to Victorian times and even from across the street it kind of looks like what my dad would call a ‘villain’s pub’. It’s probably nothing of the sort, but it does have a bit of local villainy in its history, allegedly being where George Cornell had a punch-up with Ronnie Kray. This is also Jack the Ripper land, and those murders were investigated by the cops at the nearby police station on Leman St. There was another pub a little further down the street I would like to draw sometime, the Sir Sydney Smith. London has been losing so many of its great historic pubs in recent years, especially lately, for one reason or other, mostly because property is so expensive in London that many old places can’t afford to stay in existence, and with beer being so expensive these days and the cost of living being so high, people can’t afford the pubs like they used to. I always try to make sure I spend some good time in old pubs whenever I’m back home; use them or lose them. Many are historically so important to the local area. I heard recently that The Tipperary on Fleet Street was closed for good; that was the first place in London to sell Guinness (first place outside Ireland I think) and the pub dates from 1700. History rapidly vanishing, being replaced with vapid gourmet burger joints and chain coffee shops and expensive apartments. 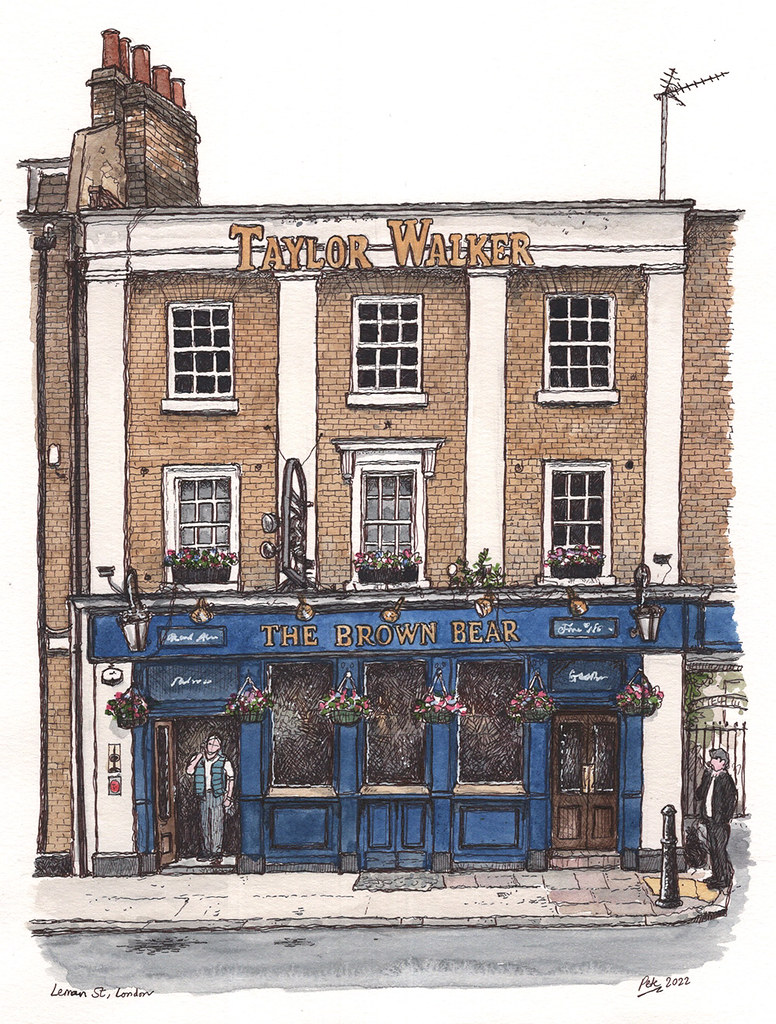