2022 is over, and 2023 is already chugging along. It’s been a while since I posted, and even then I was posting stuff from about five months ago because, well that’s just the way it is. I’ve been pretty busy, but also my home computer was just not working properly for the longest time, and I don’t like working on the small laptop, so I just didn’t scan or edit drawings, or find time to sit and write. I really enjoy sitting and writing though, so my new year resolution is to get back to that. There’s always that thing, when I’m so far behind posting all my sketches on here, it’s a headache catching up. This place is just for me after all, and I do look back over the years to find my stuff with their context, and my often-incomprehensible thoughts to go with it. I track my work, to see how I’m doing. One of the things I have done every year for the past decade now is list all of my sketches in a set-width column, and then compare them to the previous year. It’s not an exact science – some sketches are in portrait format and so don’t take up as much space, some are a little smaller and take up more, and any large drawings also count for less space. But on the whole, the immense majority of my sketching is done in a similar landscape format size, either single page or double-spread panorama, so on average it works as a guide. It also doesn’t include my digistal Illustrator drawings, or my advent calendar art or stuff like that, this is my regular drawing or sketchbook stuff (and even now, I have spotted one drawing that’s missing, because it was a commission and a bit too big to scan). I usually place them against the previous year so I know if I’m up or down on a particular month. I’m competitive by nature – so many all-night MarioKart sessions with my big brother to prove it – but not in a bad way, more in a spur-me-on-to-do-better way, and I compete exclusively with myself. If I’m running, I always have to try to beat the previous week. So I will this it to push myself to sketch more, to catch up with my past self. Sketching more means more improvement, but also it’s still one of the best ways to spend solo time, it both relaxes me and energizes me. That said, the last couple of months of the year it tailed off a bit, probably because I knew I had at least beaten 2021, my foot was off the gas. I’ve not had time (or energy) to organize any sketchcrawls, I’ve been a little bored of sketching Davis (I get that from time to time, the ‘I’ve sketched everything’ feeling), and some of the drawing I want to do is so detailed that I sometimes don’t start a sketch because I don’t have enough lunchtime time to get much meaningful out of it, especially if I’ve spent a bit too long eating, and I’ve been enjoying the big lunches a bit too much lately (I need to start getting back to the gym and competing with myself again there). But excuses, excuses, January is here again and I am committed to getting that sketchbook out a lot more. I also finally bought a new computer on New Year’s Day, so am at last getting back to scanning and editing and filing my drawings. Right now I am up early to do some pre-dawn writing (also Spurs were playing in the FA Cup at stupid-o’clock, but it turned out it was on ESPN+ and I cancelled that subscription a while back). So, finally, here are all the sketches I did in 2022, above. The last third of them are still to be posted on my sketchblog and that will be a fun early-morning routine for me for a while. Writing and exercising, and eating smaller lunches to give myself more sketching time. Let’s hope that works. 2022 saw a fair bit of travel – finally back to England after the pandemic, not once but twice; finally back to France, not once but twice, to Lille, Paris and Normandy; finally back to Belgium, not twice but once, though I packed in a lot, and yet had a relaxing time; our trip to Arizona, where we visited two national parks, Petrified Forest and the Grand Canyon, as well as many other interesting places; my brother got married and I gave a speech as best man; I got interviewed by the UC Davis Chancellor about my sketching for his video series; I coached a lot of soccer before giving up coaching to be a spectator; we had a World Cup at Christmas which was a more fun time than expected, and Messi finally won it after probably the best final I’ve ever seen; I bought more musical instruments than ever in my life, both for me and my son (who now loves the ukulele most of all), including my first ever bass guitar; in the Fall I had an operation on my face to remove a skin cancer, that left a big scar across my forehead (fun times); we had one of the hottest summers ever here, and we also experienced the hottest day ever in London; and of course, football finally came home, the Lionesses won England’s first international football trophy (we still aren’t counting Le Tournoi in 1997, then?) in the Women’s Euros, which was pretty bloody brilliant. Oh, and The Queen died, gawd rest ‘er, not long after having her 70th Jubilee (which I was also in London for, though I’m glad I wasn’t there for the Mourning After, otherwise I’d have had to join The Queue, just for the sketching opportunities). And the king Pele died, the Picasso of Football. I’ll probably write about all these eventually. I’m still in shock after hearing yesterday that Gianluca Vialli died.

Here also then is the annual comparison chart to all the other years going back to 2013 (I was prolific before then, but didn’t have the idea to start making these lists, and am not going back to do that now, it’s kind of a do it as you go along thing). Here’s to 2023, whatever that will end up looking like for the world. I hope it looks more like 2012 (but with 2019’s sketching). 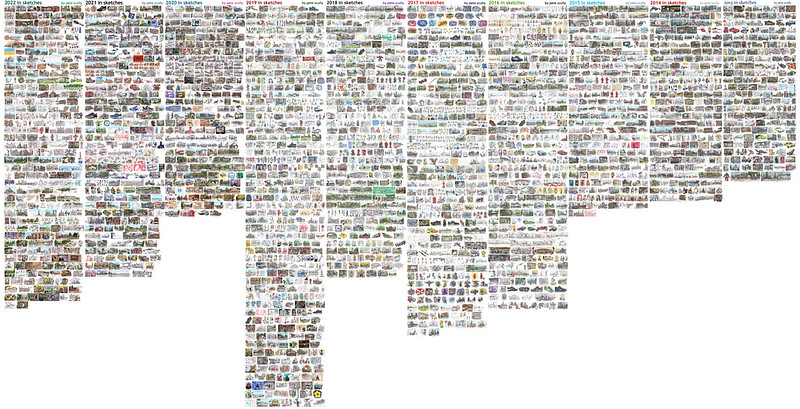