Still in Burnt Oak, this is up Orange Hill Road, around the corner from my mum’s house. It’s part of the old St. Roses’s Convent (I drew the main building of that a few years ago, see “the-convent-at-the-top-of-orange-hill/“), which was next to the long-since-moved St. James’s Catholic School, and also next to the Watling Community Center, which is where my mum and dad had their wedding party back in 1991. I used to walk past here most days as a kid. Well, some days. If I was walking to Edgware I would usually cut down Boston and up Littlefields to get into that side of Deansbrook. I used to walk past this way if I was heading up Deans Lane to the newsagents Eric and Mavis up by the Green Man, because they had a better selection of magazines and comics there, or to the Golden Fry chip shop. It was Golden Fry wasn’t it? No wait, Golden Fry was halfway up the Watling. I have forgotten the name of the chip shop; it’s called King Neptune now I think, but it used to be something else when I was a kid, I’m sure of it. There used to be a small police station across the street from that chippy, the Cop Shop. Anyway all that is on a different road. I would also pass this when I would go on my run, which would be all uphill, up Orange Hill, Deans Lane, past the Green Man (the junction with Hale Lane where there used to be a pub of that name, long since turned into a Harvester), up Selvage Lane to Apex Corner, where I would stop for a rest, before running back downhill again. That’s what I did in the early mornings while I was back in London (until my foot started hurting), and I thought to myself right, I should draw the rest of the convent. So I went out there in the morning and drew about half of this, adding in the rest of the details when I was sat down (resting that dodgy foot). It’s worth colouring in, but I couldn’t be bothered this time. Maybe I should make a Burnt Oak Colouring-In Book. There’s an idea.

If you want to see the previous one I drew, on another early morning walk, here it is. It’s funny, my memories of this particular building are usually after dark, this looming many-chimneyed building against a rainy purple-grey sky, an occasional light from a window, but here it is on a nice bright summer morning. 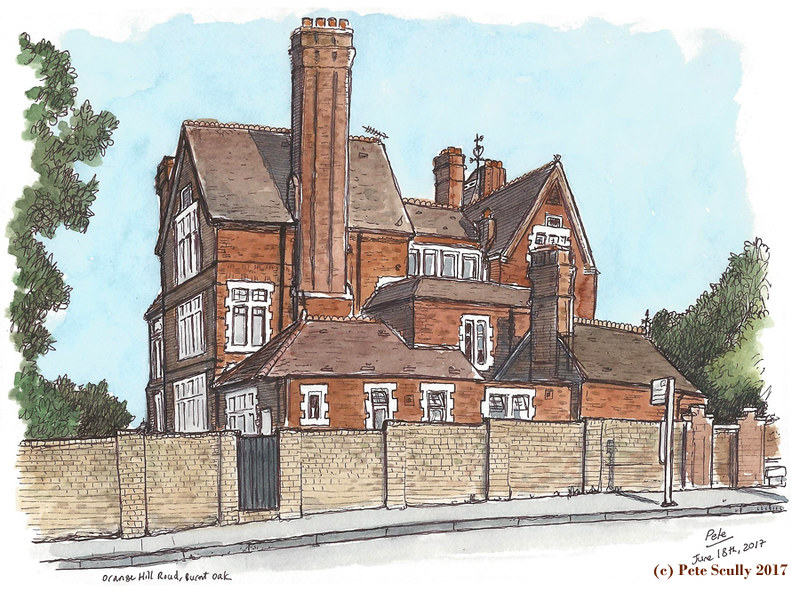