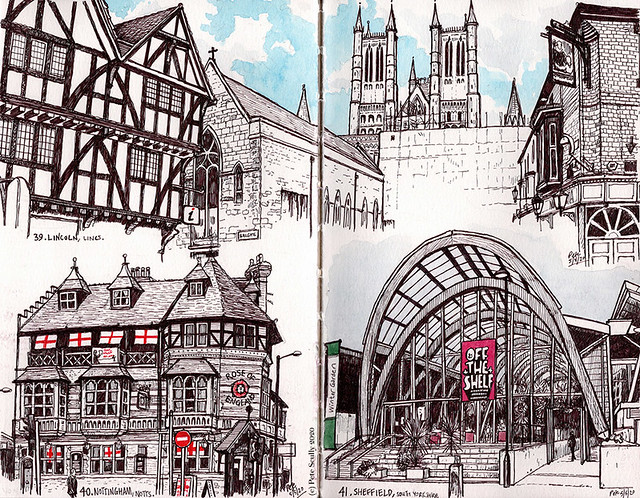 Onwards through great Britain we go. Last time out we were in Skegness, Lincolnshire, and that’s a big country so I decided to stick around. I really want to visit Lincoln some day, to draw the big cathedral. I would love to do a real tour of all of England’s cathedrals, but them into a big book. On this virtual trip however I couldn’t get a great view, but you can see it poking its head out from over that scaffolding in the panorama at the top of the spread. Lincoln of course is the name of one of the great American presidents, Honest Abe Lincoln, wearer of tall hats. The city does date back to the Romans, Lindum Colonia, though that grew from an older Iron Age settlement. The Cathedral was, believe it or not, the Tallest Building In The World for about 200 years in the Middle Ages, but the really tall spire that gave them that title fell down a long time ago and they never bothered putting it back.

Next up is Nottingham. I used to wonder a lot about Nottingham when I was a kid. Obviously I always associated it with Robin Hood, but I would read road maps of Britain before going to bed at night (and Europe too; I was really into travelling in my head) and Nottingham would pop out as a place that wasn’t far from all the other places in England. Now it makes me think of that film “This Is England”. So while virtually wandering Nottingham, I found a big old pub called “Rose of England” covered in England flags, so I decided to draw that. I needed somewhere with lots of England flags, since I drew a pub in Cardiff covered in Welsh flags. I never found a pub covered in Scotland flags, but ah well, maybe if Street View goes around Glasgow during the next football World Cup they’ll find some. Oh, ok, maybe not the World Cup, er, maybe the Rugby Six Nations. Anyway Nottingham is also the place where Brian Clough, one of the greatest football managers of all, worked as the gaffer of Nottingham Forest, leading them to two European Cups, one Football League Title, and a helluva lotta League Cups. I am a big fan of Cloughie and his funny ways, especially all the stories his former players would tell about him. but of course with Nottingham we have to think about one man only – the Sheriff of Nottingham. Oh, and Robin Hood. The Sheriff was played by one of my favourite actors of all time, Rickman. Rickman’s voice was perfect, nasal and dismissive. Anyway enough of Nottingham, time to move slightly further north into South Yorkshire, and to the Steel City.

Sheffield is big, and has an important history. This is where our knives and forks were made, the steel industry here being world-famous. In sporting terms, the oldest professional club is Sheffield FC, while the two other bigger clubs have a long history in the game, Sheffield Wednesday and Sheffield United (who are the “Blades”). I used to watch the Snooker World Championships every May on TV which take place at the Crucible in Sheffield. One of my favourite bands, Pulp, are famous Sheffielders, as is the singer’s namesake Joe Cocker. There’s something intrinsically normal and unpretentious about Sheffield, and I’d like to walk about its neighbourhoods one day with a sketchbook. I drew the quite modern looking Winter Gardens entrance on my virtual tour. But despite all of this, whenever I think of Sheffield, I get flashbacks of nightmares I had for years because of one TV miniseries that came out in 1984: “Threads”. If you haven’t heard of Threads, it was a dramatization of a nuclear attack seen through the eyes of local people in Sheffield. It was so realistic, it scared the absolute living bejeezus out of me. The woman peeing herself in the street. The white flash melting milkbottles and people. I was only eight and the Cold War was very much a thing and something I worried about a lot, I had that book “When The Wind Blows” and I remember “Protect and Survive”, the government information advising us to paint the windows white and take the doors off their hinges. So yeah, if I think of Sheffield I think of when it was blown away in Threads.

And on that bleak note, we will move into the Peak District and continue westwards on the virtual Great Britain tour, and take our minds off of fictitious 1980s nuclear wars that still wake me up in the night.