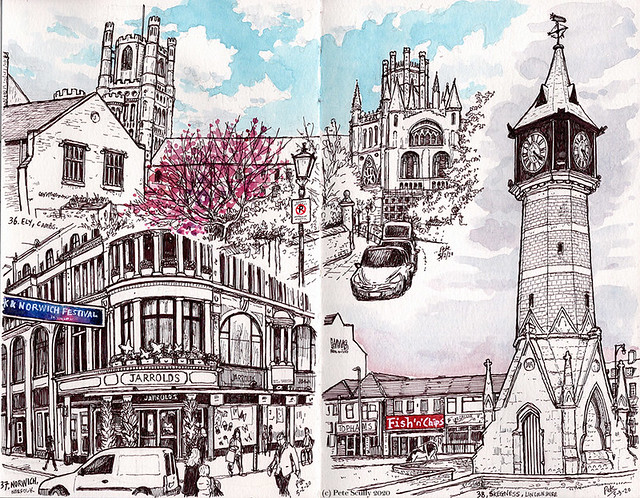 I’m not doing East Anglia any justice. It might not be as dramatic as Wales or as culturally diverse as London, but there are lots of places to explore, immense amounts of history and legend, and despite geographically not being that far from London it sometimes feels far away and distant. At least that’s how I usually felt when going there as a kid, but even now Premier League football teams in London will often fly to games in Norwich rather than take the coach. So in this virtual tour I am really rushing past this important part of England, just stopping off at a couple of places to say hi before heading into the north of the country.

First up is Ely, a small cathedral city in Cambridgeshire. Ely might be small but the cathedral is huge, and I’ve always wanted to go back there and draw it. The first time I was in Ely was in 1995 visiting my friend Jacki for the day, looking at the cathedral, the river, Oliver Cromwell’s house, the shops, and the Woolworth’s, but not the Little Chef which I had heard a lot about, before I caught my train back to King’s Cross; I think I stopped by Ely again briefly a year later, but memory fails me a bit. I do have a few sketching friends in Ely now and have wanted to get back there for a while to draw that cathedral, but I’ll have to make do with virtual sketching for now. The Woolworth’s is long gone, as is the Little Chef I expect. Ely is in the Fens, and the name probably comes from the “isle of eels”, or so I was told at the time. The Fens are a flat and marshy landscape, spreading out across northern East Anglia right up to The Wash. They bring to mind the great Anglo-Saxon hero Hereward the Wake, who held out against the Norman conquerors (who probably called him “The Wake” as an insult like online trolls now dismiss people as “Woke”). Hereward the SJW led a virtue-signalling rebellion (or was it a radical left riot?) against the freedom-loving Normans who had come to England in 1066 to create jobs (building castles, chopping heads, harrying norths). They didn’t have Twitter in those days, just scribes who used no punctuation whatsoever (so a bit like today). It was here in Ely that Hereward made his stand against William the Conqueror’s Normans, who even brought along a Witch, an actual Witch, in a tall mobile wooden tower to try to freak the English out with magic and spells, though that didn’t work and the English just set fire to the tower (true story). The isle of Ely (as it was an island in those days) ultimately fell, and Hereward escaped to live as an outlaw in the Fens, with his brothers Thereward and Everywhereward (not a true story).

So that’s Ely, now it’s time to head into Norfolk. I decided to miss out the Suffolk part of East Anglia, which is a real shame as the countryside is really nice there. Think Constable, Gainsborough, and the others. I needed to get to Norwich, the biggest city in East Anglia and a place that has a lot of childhood memories for me. My aunt Pat lived in Norwich when I was a kid, in a house next to the big Heath with lots of my cousins. We’d visit them from time to time, this house with what seemed like so many rooms, even a basement (I still get excited when a house has a basement). When I was seven I spent a few weeks staying up there with my aunt when my little sister was a baby, mostly playing with my cousin Daniel, speeding down the steep slope of the Heath on bits of cardboard box, playing Star Wars, going to see Superman III, eating out at a place called Zaks. My cousins were Jehovah’s Witnesses so I remember bedtime stories being stories like Lot’s wife turning into a pillar of salt, which didn’t give me nightmares but made me really wonder about the physics of that. I think I still have the book of those stories my aunt gave me somewhere. Speaking of salt, when I was visiting as a kid my cousin Daniel decided to pour loads of salt into my orange squash, to see what would happen. I remember saying, this tastes funny, and he told me what he’d done. Oh ok, I said, and I kept drinking it, assuming it was some Norfolk thing. Then we sat down for breakfast and I erupted in vomit like Mount Vesuvius, all over my older cousin Debbie’s nice leather jacket. Daniel got in trouble, I just kept throwing up, but the lesson learned was don’t put salt in orange squash. The last time I visited Norwich was when I was 15, we popped by to see my aunt and to my cousin Denise’s. I still have a lot of family around Norwich and Norfolk, I wish I had the time to pop by and say hi to them all, and Norwich would be a fun place to explore and draw. I chose to draw Jarrold’s, the big department store in the centre of town, I vaguely remember my cousin telling me about it when I was a kid, but I don’t know if I ever went there.

And finally in this spread, we leave East Anglia but stick with the flatter Fen counties, going into Lincolnshire, on the other side of the Wash. This is the coastal town of Skegness, traditionally seaside holiday spot on the North Sea. Since I missed out all the other east coast seaside spots like Clacton, Walton-on-the-Naze, Great Yarmouth, Caister, Sheringham, I had to include Skeggy, though I have not been there myself. I drew the clock tower on the seafront, and you can see in the background there are several fish and chip shops. There seem to be so many chippies around here, and that is a very good thing, I think you always need a good fish and chip shop nearby, it’s a requirement. Being northern and by the sea the fish and chips are bound to be pretty good. When I think of Skegness, as with many coastal towns, I think of chalet parks, caravan parks, chip shops, arcades, bingo, sticks of rock. We used to stay in chalets at holiday parks in Caister as a kid, and we would go further north on the other side of England to the Pontins resort in Southport, near Blackpool. We would also go to a caravan park in Walton-on-the-Naze in Essex, and occasionally to Camber Sands on the south coast. But never to Skegness, always just a bit further away, most Londoners wouldn’t head that far, again unless they went up to Blackpool. “Skegness” as a name sounds very “Danelaw”, and the name does come from Old Norse, with Skeggi either being the name of a Viking or just a word meaning “beard-shaped”, with “Ness” being a coastal headland. What’s the Danelaw? That’s the portion of England that was cut diagonally across the country in late Anglo-Saxon times that was effectively taken over by the Vikings, in short. You’ll find a larger number of place-names of Norse origin, lots of -thorpes and -bys and -holmes and -nesses. Looking at the map as I take the virtual trip I see a lot more of them popping up the further we travel up this way.

But next up, we are heading west again, to Lincoln and further inland.