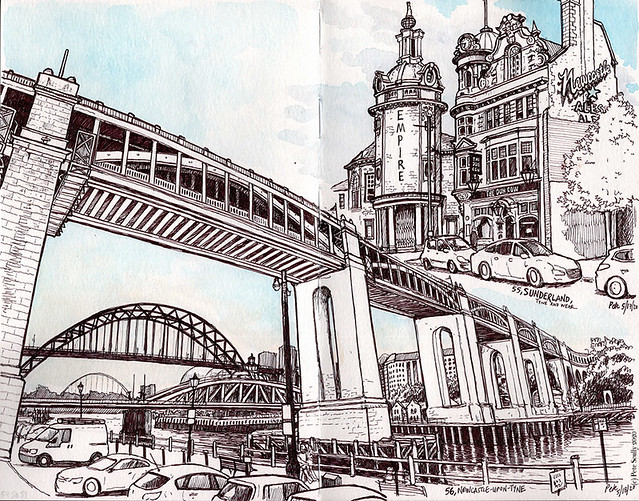 Howay man, wey aye pet, gannin reet op to NewCAStle noo! Apologies for my terrible attempt at a Newcastle “Geordie” accent, I definitely can’t do one in real life, though two of my best friends were born in the northeast, one in Sunderland and one in Newcastle (though they grew up in London so they have Tottenham and Harrow accents respectively). The Newcastle mate, Simon, can do a great Geordie accent though and comes back up here regularly, and I’d never be able to go there without him, this is very much his toon. I have never been to the north-east of England, not beyond Whitby, it really does feel like a different country to me, and the language spoken, it is English but the dialect sounds very different to mine from daahn saahf. It can be beautiful in its intonation, though growing up for me I associated it with two very specific TV programs – Byker Grove, and Auf Wiedersehen, Pet. There was Jossy’s Giants as well, but I only remember the theme tune now and not a lot else. I must say, I am very pleased with how this page turned out, it might be my favourite spread. I would love to stand beneath the real bridges and draw that angle. But I’d have to go with Simon, and I’d never attempt the accent in real life.

So first up on this North-Eastern leg, Sunderland. I liked this view of the Empire Theater and a pub with a big advert for Newcastle Ales on the side of it. Sunderland didn’t look like the prettiest city from my virtual tour view, I’ll be honest, but it had a charm about it that felt familiar to me. The name of the town reminds me of the Dark Crystal, “What was sundered and undone”, well that’s where the name came from, not the dark Crystal, but the word “sunder”. The land on the other side of the river Wear was separated or ‘sundered’ from the monastery on the other side at Monkwearmouth. That monastery was filled with Mystics, while Sunderland became filled with Skeksis who lived at Roker Park, and at first the Skeksis gave all the local Gelflings jobs, working in the palace as guards or looking after the coaches, until eventually they discovered that if you drain the essence from a Gelfling it makes you look a bit younger, so they just started draining all the Gelfling’s essence until all the Gelflings were dead, except two who were hidden away, only to come back and heal the Crystal reuniting the Skeksis with the Mystics to create a race of beings called the Mackems. Their new local football stadium was henceforth called the Stadium of Light. This is a true story, no need to look it up, definitely not made up. Speaking of football, the local team has been the subject of a Netflix series called “Sunderland ’til I die”, which I’ve seen some of, but I think they edited out all of the Skeksis but probably should have left the Podlings in, they might have done better on the pitch. Still, bit of a grim name, “Sunderland ’til I die”, perhaps they should call it “Sunderland ’til I get reunited with my evil other half and fly off into space to live forever”. Now, you may not know, but the town of Washington, which is within Sunderland, is the ancestral family home of one George Washington, the tall man that was in the musical Hamilton; he was Hamilton’s boss.

And so on to Newcastle-upon-Tyne. I like drawing bridges, and this place has bridges. Newcastle is a big port city, important for the coal industry historically, and a long tradition of ship-building on the Tyne. For those who don’t know, that is the river, the Tyne. There’s also a famous song by Lindisfarne called “Fog on the Tyne”, which famous Geordie son Gazza “Paul” Gascoigne re-released when asked to bring out a music video making sure people knew he was a Geordie in case they were not aware. Fellow North-Easter who played for Newcastle and Spurs, Chris Waddle, also tried his hand as a pop star alongside Glenn Hoddle in the mid 80s, with the most cringeworthy record of a cringeworthy time, “Diamond Lights”. I am still embarrassed to have ever watched the video for that. I’ve mentioned the word “Geordie” a few times as a descriptive name for people from Newcastle, that is like “Scouser” for Liverpool, “Cockney” for London, “Brummie” for Birmingham and “Someone from Bristol” for Bristol. The most famous Geordies in the world are Ant and/or Dec. They started out as PJ and/or Duncan, characters from Byker Byker Byker Byker Grove, with a hit song called “Let’s Get Ready To Rumble”, which was a good bit better than Fog on the Tyne, and light years better than Diamond Lights. They went on to become Britain’s most beloved TV presenters with their cheeky little faces and most famously presented the Jungle reality series “I’m A Celebrity, Get Me Out Of Here!” which recreates the real situation of famous people being put in a tropical situation to talk behind each others backs, eat insects, and become more famous for that than anything they ever did. The other most famous Geordies in the world are Sting and Jimmy Nail, both named after things with sharp points. Mark Knopfler from Dire Straits is also a local Geordie and they play some of his music before Newcastle United games. That’s the big black and white striped football team from up here, with long suffering but very vocal fans. One of the best periods of football from them in my lifetime was the mid 90s when they came very close to winning the Premier League, under the great little North-East lad Kevin Keegan, a hero of mine. I met him in Charleroi when he was England manager, he signed my diary. But without doubt one of the best things to come out of Newcastle is the comic magazine Viz. Biffa Bacon, Billy the Fish, Finbarr Saunders, though I always liked the letters pages, and the Top Tips. It’s still going now, but I used to read it when my brother would buy it in the late 80s, and it’s from there that I learned all the Geordie words that I cannot say in real life.

Also coming out of Newcastle is Hadrian’s Wall, the Roman barrier between the Empire and the wild world beyond, and that is our next stop. I might take a break from posting while I catch up with some of my other sketches, though I’ve not been drawing that much lately. But the next spread will take us into the country of Scotland, the last leg of the virtual journey…