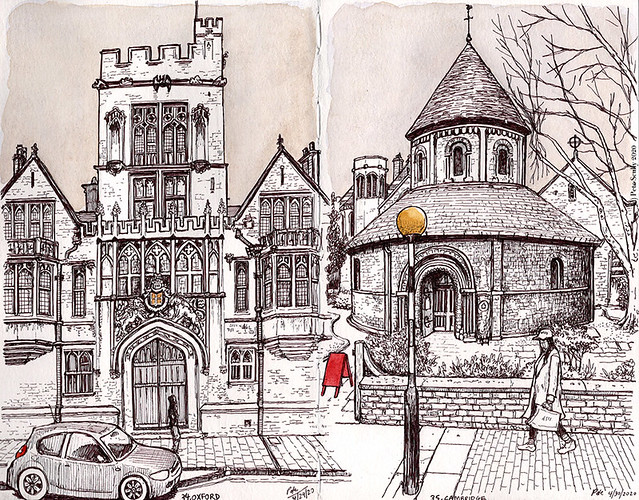 Oxbridge. The Brangelina of cities. What those of you outside of academic circles may not know though is that they are in fact two completely separate towns with very little in common. Sure they have world class universities that are hard to get into. Well, it was hard for me anyway, so I didn’t even try. You needed a lot more “As” to get in there, and my single “A” in English wouldn’t have been enough. Also I don’t know if I’d have been able to choose between the two. So I ended up staying in London and going to Queen Mary, and I liked it there. Just going to University itself was to open a different world to me than the one I knew from Burnt Oak, it was completely uncommon among most people I grew up with, so the idea of Oxbridge would have been like the idea of going to work at Buckingham Palace or something. Still, I wonder what it would have been like if I had set Oxbridge as a goal earlier in my school career. Probably no different. Even at sixth form college, I knew nobody who went there, or had applied there, it was just seen as effectively off-limits. I’ve met so many people since, great academics of course, who either went there or teach there now, and it seems strange to think of it as something so distant, but I still wouldn’t get in, unless they have a degree in drawing fire hydrants or making bad puns.

So, Oxford then. There are so many places to draw here, but I had to draw one of the big grand college entrances. This is the front of Brasenose College, right in the heart of the city. The University’s colleges are located throughout Oxford (as are Cambridge’s). The University of Oxford itself was founded in 1096 (possibly), although it was really around 1167 that it grew after King Henry II forbade students from going to the Sorbonne in Paris (in case the Sorbonne stole their data, good job we don’t have leaders like that now). Brasenose dates from 1509, its name coming from an old brass door knocker on the old Brasenose Hall. Famous alumni of Brasenose include David Cameron, who had some brass himself; Michael Palin, whose travel shows and books made me want to be a travel writer when I was a kid (yeah, working on that); William Webb Ellis, who invented rugby; and Field Marshal Haig, who was played by Geoffrey Palmer in Blackadder Goes Forth. I’ve been to Oxford a few times, always thought it a place I could live if we were ever to go back to England. I suppose I’m drawn to university towns, I like being close to big libraries.

I decided to skip past all of the places in between “Ox” and “Bridge”, such as Milton Keynes, and Luton, which I’ll be sure to include in a future virtual sketchbook, honestly, and proceeded to the other great university city of Cambridge. The University of Cambridge was founded in 1209 after there were big punch-ups between the locals of Oxford (“town”) and the scholars of the University (“gown”). Actually it was pretty serious – three Oxford scholars were hanged by authorities following the death of a local woman, kicking off a load of violence. Many fled to Cambridge and decided to start a new University right there. Just like in Oxford the colleges are scattered among the town; just like in Oxford there is a “Bridge of Sighs”; just like in Oxford there is a river that winds around town between the colleges, which just like in Oxford is full of “punts”, those long flat boats where people will punt along by pushing a long wooden stick against the riverbed. I’ve done it myself, not easy to navigate at first, but I managed not to fall in. I really like Cambridge, a bit smaller than Oxford, although last time I was there it was pretty crowded with tourists. I first went to Cambridge when I was 19, to visit a friend who I had met on a college exchange trip to France. I remember that day, getting the train up from King’s Cross, walking about town, going to the shopping centre (I bought a Boo Radleys CD there, I remember clearly), reading the Cambridge Evening News and laughing at the hilarious headline “Rising Bollards Claim Another Victim”. I liked being 19, it was a simple time. I’ve been back to Cambridge a number of times and I always like it there, and though it’s somewhere I could definitely sketch I decided on the virtual trip that I would not draw another college building, just creating a mirror on the spread with Oxford, so I chose to draw the Round Church, which as you can see is just that.

Now these being 34 and 35 you’ll notice that we are now over the halfway point in our journey around Great Britain. We will zigzag around the country missing out many a great town and including some which you might think, wow you skipped Ipswich for this place? But the obvious next stop in this virtual journey is just up the train track from Cambridge in the Fens city of Ely…