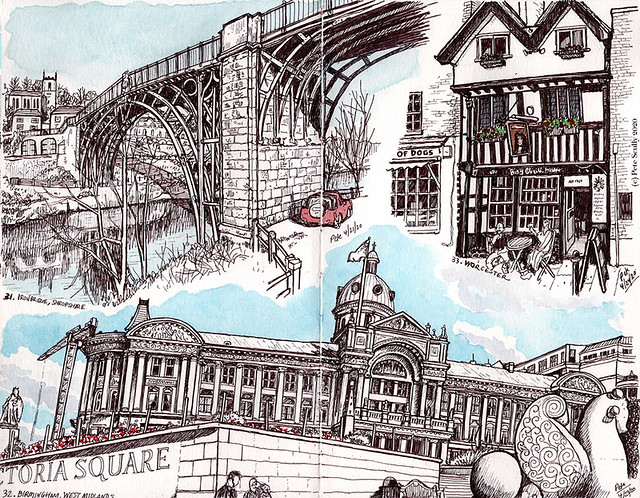 So we virtually cross over the virtual border into the virtual country of England, and three more Places I Have Never Been. This will be the case for most places. I’ve lived more than a third of my life away from Britain, and certainly the majority of the most important bits, and when I still lived in London most of my travels would be across the channel (it was usually cheaper). So I have missed out on lot of interesting places in Britain, so the purpose of this virtual journey was partly to imagine myself travelling about them with my sketchbook, like a kid mountaineering on the staircase, but also to scout them out for future visits. The inspiration for a trip like this was a book I was given several years ago by my cousin Dawn, called “Richard Bell’s Britain”. It is a fully illustrated account of the artist Richard Bell’s year-long solo tour around Great Britain, drawing in brown pen and watercolour, mostly sketching nature such as plants, wildlife, hills, cliffs, really focusing in on the geology, the old country walls and fences, but also the occasional urban scene. Even the writing is in the same brown pen, printed on soft cream coloured paper. It was published in 1981, when I was very young, and in love with Watership Down – in fact Bell was one of the artists on that animated film, and he revisits the actual place in his book. (Fun fact – Watership Down was the first book without pictures that I ever read, and I remember it took me ages, and gave me nightmares, but I still have that original copy).

As I said, my cousin Dawn Painter, herself a brilliant all-round artist and expert (particularly of the natural world), sent me the book, having picked it up at a second-hand bookstore in London. In the note she left inside the book she had drawn a picture of the Iron Bridge which spans Ironbridge Gorge in Shropshire, at the town of Ironbridge. She said that there is so much to draw, and so much history and from my virtual tour I can see that I really have to come here some day. I like drawing a bridge, and this one made me concentrate. If I go in real life I need to practice that bridge. If it rains though I’m starting under an umbrella and then drawing the rest from a photo with a pint in the pub. So what’s the deal with Ironbridge then? This was in fact the first cast iron bridge in the world. This is where the Industrial Revolution started. You know the Industrial Age we all like, we’re all big fans of, well this is where it came from. Coalbrookdale, the village around the corner, is where Abraham Darby smelted iron ore. As all his friends would say, “he who smelt it dealt it”. Funfacts: Tony Stark was born here, and this is where he first built Iron Man, and the hidden realm of Kun Lun is also around somewhere around here, which is where you’ll find Iron Fist, and rock band Iron Maiden, they were made here too, and the Iron Throne from Westeros was forged here, and…Sorry, I let it get silly. Ironically, irony was not born here. Now another town just a smelted iron ore’s throw away from here is Telford, which I did not draw, but I remember as being a ‘new’ town which would actually advertise itself on TV, “come and live in Telford, a lovely place to live,” or something along those lines. It was named after Thomas Telford, who, as you will remember from my last post, built the big bridge over the Menai Straits. It’s actually very close to The Wrekin, a tall cone-shaped hill I learned about as a kid. It is pronounced “reekin” (he who smelt it dealt it, eh, Abraham). The story I learned was that there was this giant who really hated Shrewsbury, because he kept pronouncing it “shrow-sbury” when locals insisted it was “shroo-sbury”, so he decided to flood the town, or “floooood” it as he would say mockingly. So he goes and gets this massive great big mound of earth and sets off towards Shrewsbury. On the way he meets a cobbler carrying a sack of old shoes (or “shows”, I’m not sure). When the giant asks him the way to Shrewsbury, the cobbler realizes what the giant plans to do and thinks quickly, telling him that “no no Shrewsbury is a really long way away, look at all the shoes I have worn out coming from there!” Now you and I know this was just, haha, a load of old cobblers, but the giant thought, well that does look quite far, and decided to dump the massive pile of earth right where he stood, and went off home I suppose. The mound became known as the “Wrekin”, pronounced “reckin”, but just to annoy the giant even more local people started pronouncing it “reekin” instead.

Enough gadding about Shropshire legends, let’s head into the second city of England, Birmingham.  We have established I’ve never been there, and in all my life I have never once thought of ever going there. I used to be mildly obsessed with the Birmingham, or “Brummie”, accent when I was a kid, because of Barry from Auf Wiedersehen Pet, although I’d be lying if I said it was in my list of top accents in the country. (My top three by the way are Liverpool, Glasgow, and probably Swansea, though that might be just specifically Elis James’s voice.) But I sometimes hear the accent and it just blows me away how gentle and soothing it can be. I can’t say the same for my own Burnt Oak accent of north London, which has more of the “oi you f*#!in’ w@%ker” about it, though that can really come in handy in a tight spot. All I’m saying is that when pushed, the fake transatlantic British accent steps aside and the Burnt Oak comes right back out again. But I used to try to practice accents when I was a kid, and Birmingham was one I always tried, though usually it just made me sound a bit bored. This is what I’m missing out on in this virtual tour, all the accents, and those found across the Midlands are a big gap in my knowledge. I remember watching Crossroads as a kid, with that one very Brummie character Benny on it, but I wasn’t really interested when he wasn’t on screen. We all know Slade and Ozzy Osbourne and Def Leppard from that Vic and Bob sketch. I used to like Bovril. So virtually touring Birmingham, I found it very much as I had always imagined it, a big city that wasn’t London, lots of canals (so many canals). Birmingham is famous for the quiz question, “Watt Steam Engine was invented in Birmingham?” It is also famous for its “Bullring” shopping centre in the middle of town. But I was most drawn to this grand building in Victoria Square, which houses Birmingham’s Museum and Art Gallery. I was really happy with the slightly Dutch camera angle layout, even though it only left me a small place in the top right corner for whichever town I was heading to next.

Which turned out to be Worcester. None of your sauce. Most people know Worcester from the joke about the Bicester Times and the Worcester Times, but it also has a history with the King Charles II. After losing the Battle of Worcester in 1651, Charles popped into this very pub for a post-battle drink and probably had some lovely Worcester Sauce flavour crisps, hiding out while Oliver Cromwell’s New Model Army looked for him in the most famous game of Hide and Seek ever played in Britain, if you don’t count the one Richard II played with his nephews in the Tower of London (BTW, the Princes won that game). The New Model Army wasn’t an Airfix kit, and while they were called Roundheads, it’s not because they looked like Playmobil figures. But that’s what I see whenever thinking about Civil War era England. Anyway Charles II, son of the recently beheaded Charles I (shortest English King ever, for obvious reasons) hid in here, probably wearing a t-shirt saying “Worcester. Day. Ever.” This pub is now called the King Charles House, which I presume it wasn’t called at the time, because that would have been a really bad place to hide. Or a genius place, because Cromwell surely wouldn’t look there. After the Roundheads turned up, he ran out the back door, as you would in any pub when the Millwall firm shows up. Charles went on to hide in various places (such as in the branches of trees, which is why you get so many pubs called the “Royal Oak” in England) (incidentally the Colonel who hid in the tree with him was called Colonel Careless, who for obvious reasons had to speak in a whisper, and I think you know where I’m going with that) before eventually making his way to France where he hung out for nine years until it was safe for him to come back, like Dirty Den in Eastenders.

This was a really interesting leg of the virtual journey, and there are so many other places I had to miss out. I didn’t draw Warwick, or Stratford-upon-Avon, or the Cotswolds villages, or Coventry, or any of the other urban areas of the West Midlands like Wolves or West Brom. I was on the clock, so I hightailed it down to Oxford, back on the River Thames (or the “Isis” as they call it there, unless they have stopped calling it that, like when Lord Grantham’s dog was killed off in Downton Abbey). So join me next time as we go to Oxford and then straight away to Cambridge to compare the two.