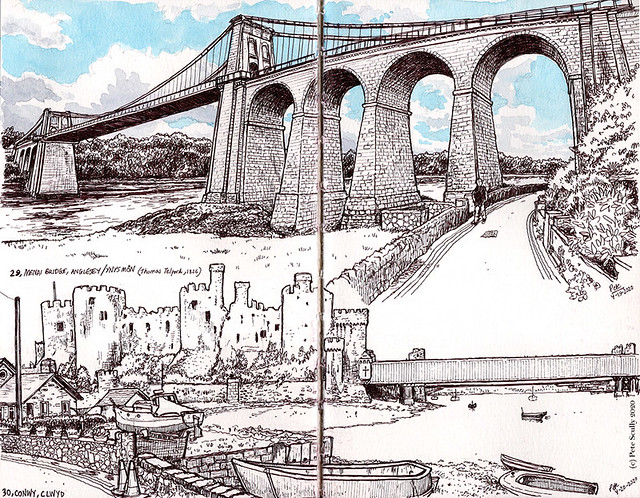 The last of the Welsh trilogy brings us right up to North Wales, although I wish I’d made space for the interior. I had to weigh up whether I needed to include Wrexham, but later on leave out Sunderland? It’s a weighty issue, and I’d only be including Wrexham because they knocked Arsenal out of the FA Cup that one time. I really enjoyed this spread though, I hope it shows. It was a very enjoyable virtual journey, very peaceful. It was still a couple of days or so before our flood, when I was still at the desk downstairs, and so it’s funny that two bridges ended up on these pages. Or not. But I imagined myself walking these areas, like Tony Robinson in that TV series I have watched a lot of lately. I’ve been thinking a lot about walking the UK, planning out hikes, right down to deciding which walking poles to bring. Of course I would need to factor in sketching time, so each walk would take a lot longer, but I draw pretty fast, and can always do half and finish the rest at the local pub in the evening, listening away for accents and dialects. I studied the history of the English language, and one of my popular-academic linguistic heroes lives up this way, David Crystal, on Anglesey. I have read many of his books, and I’ve always wanted to meet him and talk language and its history and future with him.

So, let’s have a butcher’s at the first drawing then, this is the mighty Menai Suspension Bridge, which crosses high above the Menai Strait that separates the mainland from the island of Anglesey (Ynys Môn in Welsh). The bridge was built by the great civil engineer and architect Thomas Telford and was opened in 1826, and the road that goes across it is actually the A5 – the very same road that links up what we call Watling Street, although that Roman road did not come out this far, although in that Watling Street book I started reading the author does continue past Wroxeter and up to Holyhead, but fails to talk about this amazing bridge. So technically this links it up with the first spread of the book. Now, this sketch was drawn on the Anglesey side of the Menai Strait, so technically it is not on the island of Great Britain – exception to the rule – but you can see the island of Great Britain in the drawing so no rules broken. The name “Anglesey” is likely of Viking origin, but the best place name on the island is unmistakably Welsh: Llanfairpwllgwyngyllgogerychwyrndrobwllllantysiliogogogoch. It means “Stmaryschurchinthehollowofthewhitehazelneartotherapidwhirlpoolofllantysiliooftheredcave”, which is easy for you to say. It’s where you go to take a picture of the train station sign using panoramic mode on your phone. I have to go there.

It’s North Wales, so another castle was needed, and I like the one in Conwy, mostly because Caernarfon would mean backtracking again, and I’d already done that, or putting the first sketch on the bottom of a spread, and I had done that already. I’m trying to make the book interesting to pick up and look through. Not that I have any interest in publishing, this is just a curio to bring to events in future, but it’s good to mix it up. I get it right a few more times, and less right on a couple, but mostly I’m very happy with the spreads from Wales onwards, and this one more than most. I love a bridge, I love a castle. So for Conwy I needed to find a good angle, and so I went across the River Conwy and found a nice spot next to a little cottage, I can imagine standing here sketching, maybe with the brolly sticking out my coat, saying hello to a local old fellow who passed me by, and nodding while I pretended to understand what he was saying to me, and complementing him on the beautiful countryside as if he was personally responsible for it, and him telling me something about how when he was a kid he’d catch cockles and cook them up for breakfast but that his grandkids just want to listen to records and go to London and work at desks, but they come back for Christmas and they always want cockles for breakfast, but I’m a bit old to get out there now with my back the way it is. Nice chap, this completely imaginary passer-by. Now the castle itself is another one built by Patrick McGoohan from Braveheart, and it is a World Heritage Site. It is a proper example of a proper castle, one that if you have kids and they like castles you should take them to this one.

There’s a lot more in North Wales to draw – coastal towns like Llandudno, which always reminds me of Neville Southall, the great Wales and Everton goalie (and a great follow on Twitter), the peaks and valleys of Snowdonia, and resort towns like Rhyl to draw caravan parks, chalets and chip shops. But as it is, we had to get back to England, to the Midlands, to draw yet another bridge – the very first one made of cast iron…