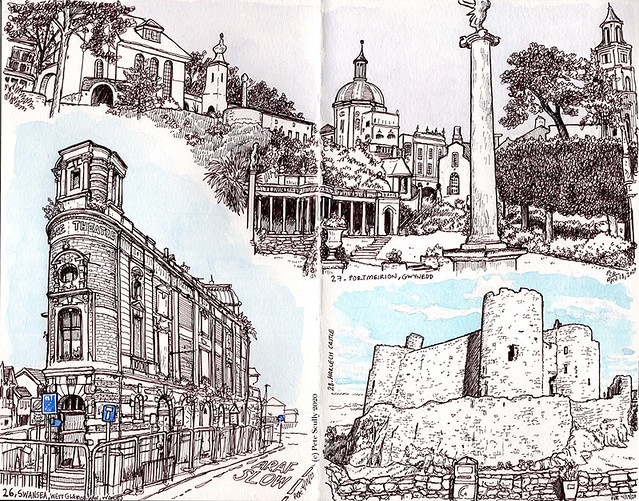 Part two of the virtual trip through Wales, Two of three. Wales is not a big country, although there is a lot to draw and you could fill whole books just on the castles. But I am on the clock, so whistle-stop it is. It’s a beautiful place, and I had to totally miss out Pembrokeshire. But here is a spread of three interesting places. Well, I assume Swansea is interesting. I liked their football team being in the Premier League. So that city is first up: Swansea. I went around the town virtually looking for something that would make a good illustration. One spot there was a bloke who looked he had fallen over, and as the virtual camera went down the street, all you see looking back is this guy just lying on the ground, nobody helping him. It looked like it was early morning  and perhaps he was getting over a night out but seeing someone just lying on the ground in Google Street View was a bit disturbing. I couldn’t virtually help, so I just felt virtually guilty. I remember once years ago in London, down near Leicester Square, I was on my way to the night bus stop after visiting friends in Notting Hill, and this old man who had been at the pub walked nearby me, tripped and fell right onto his face on a doorstep, CRUNCH. Good job I was there, I stayed with him until the ambulance came. Anyway, on this virtual occasion I kept wandering virtual Swansea, and this old boarded up run-down theatre building opened its legs wide and held out its chest and roared “whooooOOOOOAAAAAHHHH TO BEEEE or not to beeeee….”. It looked very dramatic. I just had to sketch it. Swansea is known as “Abertawe” in Wlesh, that is, the “Mouth of the River Tawe”, and it is Wales’s second city. Because of its copper smelting past Swansea has another nickname, “copperopolis”. I grew up very near to the police training school at Hendon and that’s what we called that place too. One of the most famous people from Swansea was the poet Dylan Thomas. I’ve not read much Thomas, I know a few lines, but they all make me think of that one guy lying on the pavement in Google Street View, unhelped and helpless.

So I moved on from Swansea up the coast, missing out the impressive Pembrokeshire coast, Carmarthen and Cardigan, Aberystwyth and Dolgellau, and stopped in Portmeirion. I have wanted to visit Portmeirion since my brother showed me the TV show The Prisoner when I was a kid; this was “The Village”, the place you couldn’t escape from, ebcause you would be chased by large white balloons (why didn’t Number Six carry a knitting needle?). While the show was a bit mad, I loved the music and those opening credits, and the colourful locations, and McGoohan’s indomitable, suspicious, suppressed-sense-of-humour personality. It’s always amazing to me that Portmeirion is a real place, and most people I know who have been there say it’s a nice place to visit. It was the bright idea of Sir Clough Williams-Ellis who back in the 1920s wanted to build an Italian style coastal town on the breezy banks of a Welsh estuary. It reminds me a bit of the town in Chitty Chitty Bang Bang. I just want one of those jackets that Number Six wears, the black one with the white trim along the lapel.

Next stop, I actually had to backtrack a bit and go back across the Afon Dwyryd to the coastal castle town of Harlech, on Cardigan Bay. I used to think it was called that because it gets a bit cold sometimes. I like the look of Harlech, the landscape around the castle and town looks like it could inspire an epic poem. Lot of steep hills in the town as well, but I drew the castle, another one started by Edward I, the English conqueror of Wales. Wales has a lot of castles, largely because of English kings such as Edward I building them to keep the Welsh locals in check. You’ll remember Edward I if you saw the mid-90s fantasy movie Braveheart which of course wasn’t based on true events except those that are an unintended coincidence. In that made-up drama there were a few ‘real’ historical figures such as Edward Longshanks, the villainous English king with an indomitable, suspicious, suppressed-sense-of-humour personality, played by none other than Patrick Number Six McGoohan himself. He also played the prison warden in Escape from Alcatraz starring Clint Eastwood, who in turn also played the Outlaw Josey Wales, thus coming full circle.

Next up on the virtual tour of Great Britain in 66 sketches, the final leg of Wales, and then we turn back to the midlands of England.