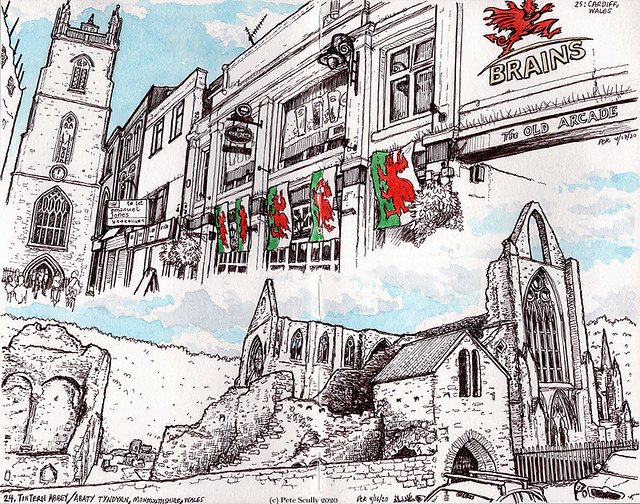 And so to continue the virtual tour of Great Britain, we have passed into a land i have never been – Wales. It’s quite amazing I’ve never been to Wales, but maybe not that surprising. It’s quite far, and I’m told it rains a lot. I suppose like a lot of places I always figured, it’s not going anywhere, I will get there some day, and then I moved to America and all those places were suddenly thousands of miles away.  I have only ever flown over Wales, on the way to Ireland, or back from America. After spending a good deal of time Google Street-Viewing my way around, I really want to go to Wales now. Looks beautiful there. Plus, we just learned that my wife’s family dates back to this part of Wales several hundreds of years ago, and some fairly historically prominent figures too, so now we want to go there and explore where they were from. Some day. We watched some videos earlier about Welsh food, and now I want to eat Welsh rarebit. Or maybe just cheese on toast will do me, I’ve not had that in a while. One of the first places I found in Wales was the lush Wye Valley, specifically the grand ruin of Tintern Abbey. I really want to do a walking trip around there. The abbey is a crumbling heap, but spectacularly evocative. It dates back to the twelfth century, but after Henry VIII dissolved the monasteries it fell into ruin. Looks like it’s been literally dissolved. Henry VIII and his big bloody ideas. Good job we don’t have leaders like that now eh. Great poets and artists would come here over the centuries and do their thing. Turner did a series of paintings, one of which is called “The Chancel and Crossing of Tintern Abbey, Looking towards the East Window”, which I totally get, thinking up a snappy title is really hard. Thomas Gainsborough did a nice graphite sketch of the abbey which is also at the Tate. Wordsworth wrote some poetry about this place, called “Lines Written A Few Miles Above Tintern Abbey“. He probably had drones and a camera, I doubt a helicopter could get a few miles into the air. My point of view was just outside. It was just like being there.

I let the sketch spread across the bottom of the page, which meant that the next sketch above the top would have to be constructed carefully. The next stop was Cardiff, the Welsh capital, and I didn’t know what I wanted to draw. I wandered lonely as a crowd, until I found an interesting view in a narrow street looking up at a church, next to a pub with lots of Welsh flags outside – perfect. So this became my favourite spread yet, I was pleased with this one. I quite like the Welsh accent, though I’m not super able to discern all the differences between the Welsh accents, that is another reason I’d like to travel there and learn more about. I really like listening to Elis James, a Welsh comedian who is often on my favourite football podcasts (he’s a Swansea City fan; we’ll be in Swansea next time), he has a lovely soft lilt in his voice. When my son was small he was obsessed with Fireman Sam, the Welsh kids cartoon. Often kids shows from the UK such as Bob the Builder were dubbed into American voices, but for some reason they kept Sam in the Welsh voices, so he’d always be doing the voices of Norman Price or Elvis Cridlington. I know a few words in the Welsh language but that’s it, although I did used to watch “Pobol Y Cwm” when I was a kid. That is a Welsh-language soap that was on S4C, a Welsh channel in the UK. I also had a teacher at school whose first language was Welsh, he was my history teacher and he ended up leaving the school to focus on his career as a Welsh-language rock singer (if I remember rightly his band was called Ian Rush, although I cannot remember his name). The Welsh do like singing, traditionally. He did say to the class right before leaving though that “some people in this class are not going to pass this A-Level”, meaning specifically me, which turned out to be a true prediction, because I gave the history A-Level up after a difficult first year, although it felt a bit too dismissive at the time and was probably the reason I quit. I remember my GCSE English teacher saying something similar when I was 16, she said that I would not pass that class and put that in my report, but only when another teacher, the awesome Mr Hedgers, stepped in and disagreed with that assessment, tutoring me and encouraging me, did I turn around and pass English GCSE; I went on to get an English A-Level grade A and later on a Master’s in English – medieval English at that, where you need to be a historian – so I’m glad for Mr Hedgers who said actually no, actually you can do it. Certainly made me believe I could.

So one day I’ll get to Wales in real life, have some of that delicious looking cake they have there, do some more sketching, and maybe even do some of that writing they do there, or maybe if I don’t get time I’ll just look out of the window of the plane going to London and write a few lines from a few miles above.

Nest up – more Wales! Swansea, Harlech and a place I’ve wanted to go for a long long time, Portmeirion. Be seeing you.