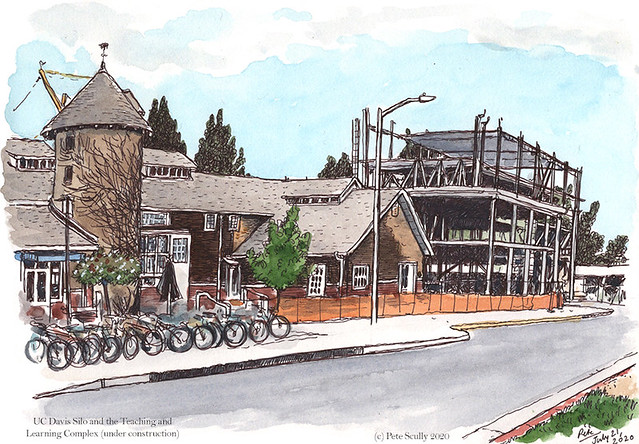 There’s a new building on campus. I might not have been on campus much the past few months, while working from home, but I cycled in recently a couple of times to see what’s going on – not a lot – but this new building is going up next to the Silo. It will be the “Teaching and Learning Complex”, or “TLC”. Unsurprisingly this isn’t on the Med Centre because staff there wear scrubs and the TLC don’t want no scrubs. Right, obligatory TLC joke out of the way. It’s always fun having a bit of construction to draw, because you know it’s something new and interesting that will look different next time. Also it is something new in a familiar location. This was a parking lot. The one above, I drew on the way into the office one lunchtime, but the one below was done last Friday after being in all day and finishing early, but by that time of the afternoon, about 4pm, it’s getting way too hot. I stood in the shade, but I walked home afterwards very much in the sun and I wish I’d brought my bike, but oh no, gotta get my steps in, gotta walk. I have been running a lot lately, slowly building up my speed and instances, very slowly but every bit of progress counts. I ran my first four mile run on Sunday, felt a great accomplishment afterwards, and took a rest from the running today. I have to run early in the morning, but too dry and hot later on. Davis in the summertime. 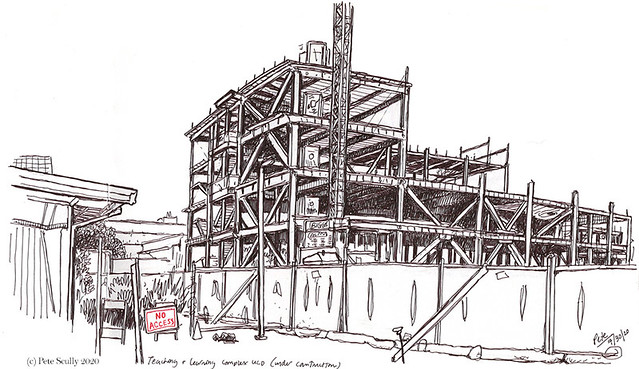