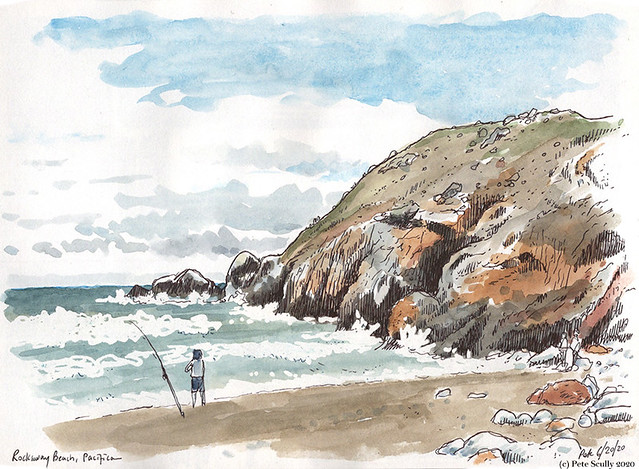 Taking a break from posting about my virtual tour of Great Britain. The shelter-in-place is tough. As much as I love being at home around all my stuff, in this oppressive Davis heat some cooler outside time is needed, and in California you cool off at the beach. That is where the cool air blows in. We took a day in Pacifica, just south of San Francisco, sat on the beach at Rockaway. It’s nice there, although my legs got a bit burnt as the rays snuck undetected through the bands of fog, and my sunscreen wasn’t quite thick enough. We had missed out on an expected weekend here in May, when the soccer tournament we’d signed our team up for was cancelled. Shame; I was hoping to win it this time. I didn’t climb the rocks, but I drew them, so that’s the same. In this sketch I actually used a masking fluid pen for the waves, I had picked that up in London last year, I don’t use it much but it was great for this purpose. I had sand in the fingers and sand between my toes. This reminds me of the illustration in the A.A.Milne book, “When We Were Very Young”, specifically the one for the poem I just mentioned, “Sand-Between-The-Toes”. I loved that book as a kid, and loved it as a parent too when my son was really small, but I really loved the drawings, and especially that one. It reminded me of being at beaches on cold, windswept days, looking out at the sea, tasting salt in the air, then heading somewhere warm for fish and chips and a cup of tea. On this day in Pacifica, we were masked up down at the beach, thankfully not too many people about, before walking around the little community of Rockaway Beach a bit, and getting a milkshake at Johnny Rocket’s (although I got the wrong flavour, in a case of misunderstanding through the mask).

Jeez I want all this to be over, this bloody pandemic, but it’s not. I have been posting on Twitter a bunch of “this time last year” or “on this day in 2016” or whenever posts, showing where I was and what I was sketching, somewhere far away in a time when people were fine mingling all together. This time last year we were on our summer trip through Holland and Belgium and France, and then London, and this year we had hoped to see Italy again, but Americans can’t go anywhere now. We did manage to take a few days earlier this month to drive down Big Sur, which was pretty spectacular. I suppose if you’re going to be stuck anywhere, California is a pretty nice place to be. Just this Davis summer heat, it’s oppressive.

2 thoughts on “down to the shouting sea”