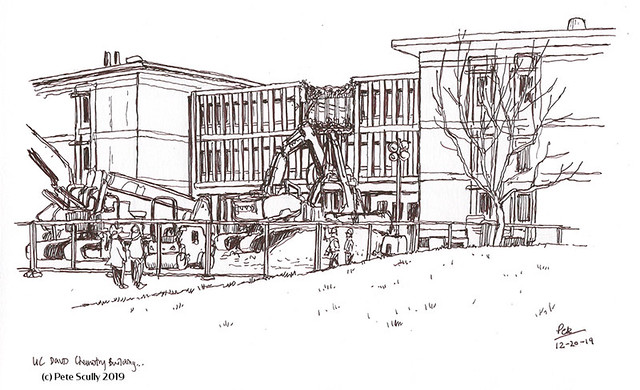 The Chemistry Building at UC Davis is big, and I have drawn bits of it before a few times. This is the building that I have most often seen fire trucks outside of, unsurprisingly. I did notice last December just before Christmas that some new work was starting on this side of the building, and that the large concrete double-decker connecting walkway between two wings was about to be toast. So I stood on the little hillock opposite (no rhyming jokes please) and drew as the machines started tearing into it. This was page one of my sketchbook, which in the new numbering system is #36, a Stillman and Birn Alpha book. 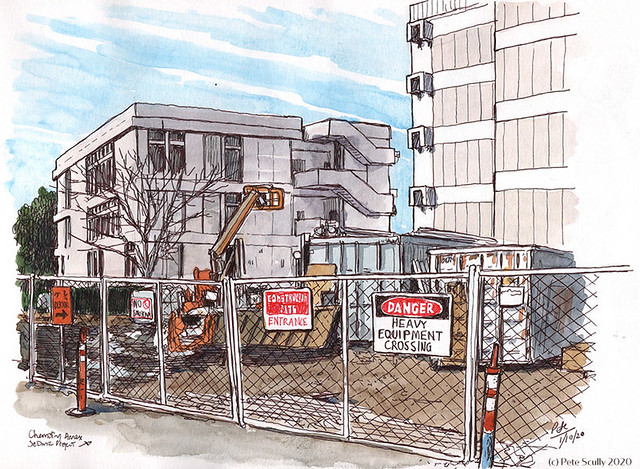 There is work going on around the other side of the building too. So in early January I stopped and drew that one lunchtime. Chemistry, I was not a fan of that subject when I was at school. I didn’t like Bunsen Burners. Our teacher was ok, a bit grumpy though, used to say things like “I don’t care if you pass your exams, I’ve already passed mine,” and I was pretty so-so with the subject. I like Physics a lot more, I just wasn’t very good at it. Whereas I didn’t like Biology much, and yet I used to get really good grades in it. They all used to even each other out like some sort of science equation with chemistry being in the middle, Bi + Ch – Ph = PS. That looks really unsciencey. One thing we used to enjoy (and so did most of you) was coming up with molecules using the letters in the periodic table to make rude words. Science can be fun. Fluoro-uranium-carbo-potassium for example, or Polonium-Oxide, etc and so on. Surprisingly I ended up getting C overall in GCSE integrated science, and that was my non-starter science career done with. You can’t go on to be a scientist after that. I loved Michael Faraday, read lots of books about astronomy and the solar system, and watched Young Einstein a bunch of times, but I guess when it came to chemistry all I brought away was remembering the formula for Potassium Permanganate, KmNO4. Oh well. Now I listen to science podcasts and watch science TV shows and feel like I know loads about science but chemistry was always a bit beyond me. Honestly it was the Bunsen Burners. 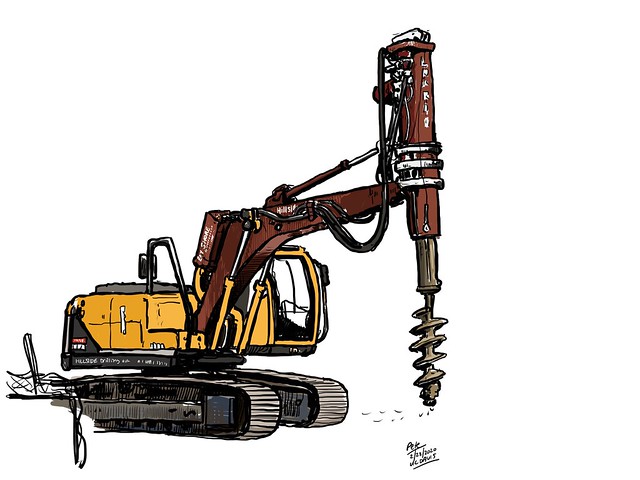 I drew this drill using the iPad. It was there with all the other machines by the Chemistry Building. Brings me back to school too, back to CDT class. Craft Design Technology. What Americans would call “shop class”. Drills, sanding machines, moulding plastic, building cogs, circuits and conductors, and all sorts of things I have forgotten. Again I was not super good at it except in the bits where I could draw. We did do one project in the third year though where we had to design a moving vehicle with a rubber band and some wooden sticks, and I made this triangular designed race car (obsessed with race cars, Formula One is back this weekend!), using a kinder-egg plastic shell as the front wheel. We had to race them. Guess who won! Yes amazingly I did. No idea how, total fluke, but I hung up my engineering boots that day. 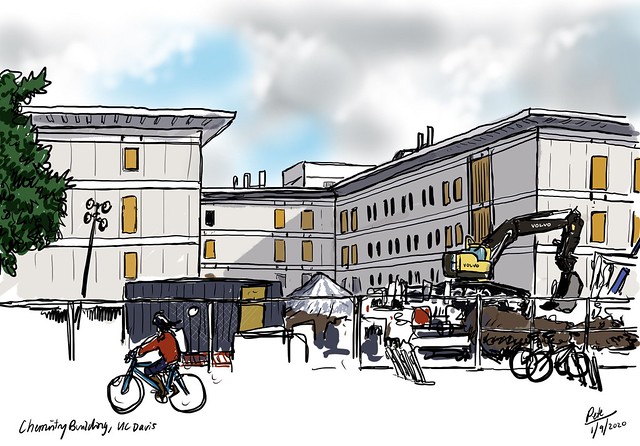 Here is another with the iPad, back round the side where the walkway used to be. I like using the iPad for those skies. You put them on a different layer. Working in layers in ProCreate is really handy. 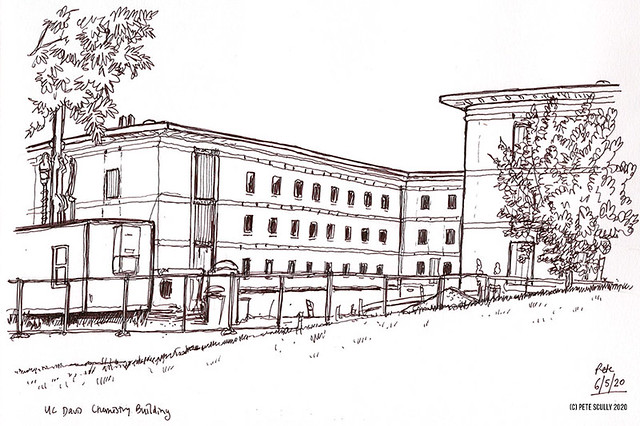 And then finally, the same view as in the first picture, and this happened to be the final page of Sketchbook #36, rounding off the book with a view from the same small hillock (oi, watch it) as on the first. And this was also my first outside sketch in three months, after the shelter-in-place was lifted. As things start to get worse, it looks like the little bit of reopening that we have seen will now be scaled back. I’m not going out much to draw these days anyway, spending my lunchtimes at home and not really going out on the weekends, so I have started looking online again and drawing London tube stations, because why not. 2020 is totally Ruthenium-Boron-Bismuth-Sulphur-Hydrogen. See no wonder I got a C in Chemistry.