January still, but this time in the non-campus world of town.Was it cold this day, probably, I can’t remember. Might have been too cold for me to bother colouring in. Except for those two bits of yellow. This is E Street. One day Davis will get around to naming its streets after actual things and not just alphabet letters. Maybe not people though, you never know if the name will need changing later if said person turns out to be a colossal scumbag. For example I’m surprised Savile Row in London is still called that. It doesn’t matter it’s named after a different Savile, just fix it anyway. Best leave E Street as it is then. Or name it after e-name concepts such as “Evolution”, or “Emolument”, or “Epidemic”. Perhaps rather than make it permanent, it could be symbolic and on a rotating basis, so it will stay “E Street” in all the addresses and publications and maybe most of the street signs, but be given a new name each year, named after some prominent figure of the day. I can’t think of any personally because nobody’s name begins with “E”. “Eddie the Eagle Edwards Street” maybe. Anyway it’s just a thought, and a bloody good one. Actually no, it favours those with names in the early letters. You see a lot of “A” Streets or “G Streets”, not so many “W Streets” or “Q Streets”. Not saying they don’t exist in bigger cities but basically what I’m saying it that Davis with it’s lack of a “P Street” and an “S Street” is unlikely to be temporarily renaming any streets after me any time in the future, so time to give up on this wild and crazy dream. 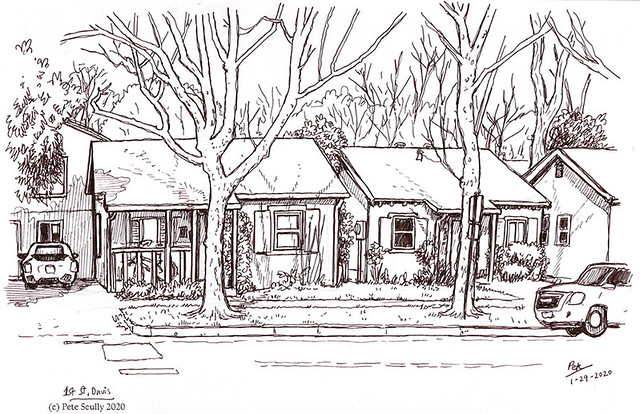 Where’s this? First Street, along there somewhere. Drawn from the shaded trees side of the street. It’s a busy road. I’ve drawn most of the buildings along that side of the street. First Street, Second Street, maybe these need a rename. Name them after things or people that rhyme with the ordinal numbers. So “Damien Hurst Street” for example. Then, well we’ll come back to Second Street. “Thora Hird Street”. “Terry Christian Out Of The Word Street”. We’ll come back to Fourth Street. “Biff McTannen Street.” This doesn’t work, forget all of this. Let’s just say 1st, 2nd, 3rd Streets and don’t worry about it. 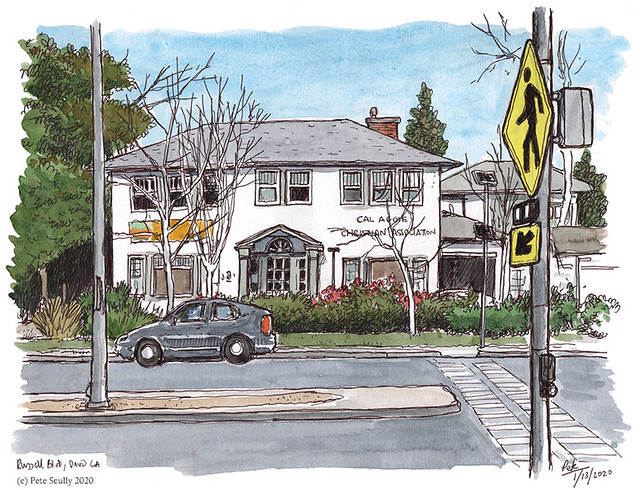 And this sketch has a bit of colour. It’s the Cal Aggie Christian Association, as drawn from the edge of the UC Davis campus. On Russell Boulevard. Named after Russell Brand, you might think, but in fact they rename it annually after different Russells: Russell Brand, Russell Harty, Russell T Davies, Bertrand Russell, Russell Crowe, and of course Russell Grant. Mid January, sunny Davis. We had a much less rainy year this year than last winter. This meant we had far fewer soccer games cancelled, hooray! Until mid-March came along and the global pandemic situation tore everything up. I think this was all of the non-campus sketches I did in January, it was nearly six months ago now.