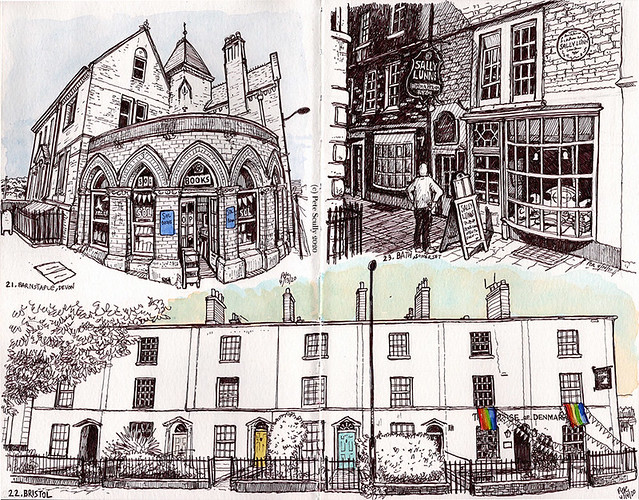 Now for Barnstaple, Bristol and Bath; I like the Bs, I like to make them rhyme. After a brief whistle-stop tour of Cornwall we are back in Devon, but this time North Devon, which is different. Devon’s a big county. First stop is Barnstaple, which I wanted to stop in because I have been there twice in the past couple of years, and I had wanted to draw this bookshop. Barnstaple is where my uncle Billy lived, until he passed away last year. He loved his music, knew more about music than anyone I’ve ever known, I still have several old Beatles and Pistols records that he gave me when I was a kid, but he also loved to read and had a huge library of books about music and crime in his living room, so sketching a bookshop seems appropriate, though I couldn’t find a good record shop to sketch. Right opposite this bookshop is an amazing chip shop. Seriously amazing chips there, but I always like chips in towns like this, usually a lot better than in London. When we visited Barnstaple for his wedding, my older brother and I stayed out late one night playing pool and afterwards went to a kebab shop near here to get some sort of local food called a “Jemmy Twitcher”. It has every kind of meat in it, plus lots of other stuff. I didn’t eat one but fair play, my brother did and he finished it. Helped sop up all the Guinness! So that’s Barnstaple. I remember coming to North Devon when I was a teenager, well just over the border in Somerset, camping with our local youth club, we did some into Devon a lot for activities like canoeing and walking about.

I’ve never been to Bristol. It’s been in the news lately, with statues of slave-traders going into the river. I didn’t really know much about Bristol as a city, except for the two football teams – City and Rovers – and the accent, and even then I couldn’t pick the accent out of a crowd. I know people who went to university there, I think, it always seemed like a college town people used to live in but now live somewhere else (bit like Davis). So the virtual tour was an eye-opener, it looks like a really interesting place, and a bigger city than I realized, lots to see and sketch, lots of places to walk, the big Clifton Suspension Bridge, there’s a cool looking market area, but I just really enjoyed all of the terraces of old houses, usually with different coloured doors. There was something really characteristic about them. So that’s what I drew. I must have virtually walked around the whole town. I wish I had been there in real life.

Something I noticed a lot which made me really sad was looking at the Google Map and everything, cafes and shops and pubs and especially theatres, everything had “temporarily closed” next to the name on the map. That was horrible, this whole thing is horrible, but these cities are their places and this virtual tour was one of imagination, imagining what it would be like standing there on the street, wandering through that market then popping into that pub for a local beer, to listen to that accent, but it’s not to be. Some day perhaps, I just hope all these places are still open when we come out of this. On that note, I went to the next spot on the tour, one I couldn’t miss out, and that’s Bath. I have only been to Bath once before, on a day trip from London when my wife first moved to England, with a tour group of Americans in the UK on student-work visas (we went to Stonehenge that day too), and it was very pretty. All the buildings are the same colour though, all made from the same type of stone. When I was a kid Bath was in a small county called Avon, named for the River not the Lady, but now it’s just part of Somerset. This drawing is a place I think we came for tea, Sally Lunn’s Historic Eating House, a little cafe named after a Huguenot refugee called Solange Luyon who became known for her delicious buns. People called her Sally Lunn because they couldn’t pronounce her name properly, but mostly they wanted to make it rhyme with “bun”. The thing called Sally Lunn’s bun isn’t even a bun, they just call it that to make it rhyme with “Sally Lunn”. See? Logical. So “Sally Lunn’s Buns” it is. They look pretty massive, Sally Lunn’s buns.

Ok that’s that. The next chapter in the virtual tour of the island of Great Britain takes us into the country of Wales. I am reminded of a joke I loved as a kid, “How do you get two whales in a Mini? Drive down the M4”. Now I live in America nobody gets that joke, so I have to try making a local equivalent, Americanize it. “How do you get two whales in a Ford SUV? Stick em in the back seat with the two giraffes!” It’s not quite as funny, but it makes me laugh on the inside. I suppose I could try it with a smaller car, like a Prius or a Corvette. “How do you get two whales in a Corvette? How the heck would I know, wise guy!” You have to do the 1930s gangster voice and say “myeaaaah, shee” as they did. I suppose I need to use an equivalent road, but it would have to go to a town that sounded like Whales, or maybe somewhere more American that sounds like a big animal in a small car. “How do you get two Antelopes in a Mini Cooper? Drive up I-80 past Sacramento!” That’s quite local for our area, I suppose, one for the Davis folk. Or maybe not an animal, how about “How do you find two needles in a garbage truck? Drive down Route 66!” Needles is a town that is on the old Route 66, at least it said so when I went there, the map says it’s actually on 40. No, best stick with the old classic, but even then it only works of you live in London or along the M4. Bath is close enough for it to still work. If you live in Wales you’d have to say “How do you get two baths in a Mini? Drive down the M4 and then turn off the A46 at the Tormarton Interchange!” Which we can all agree is much funnier. Right, see you in Wales! 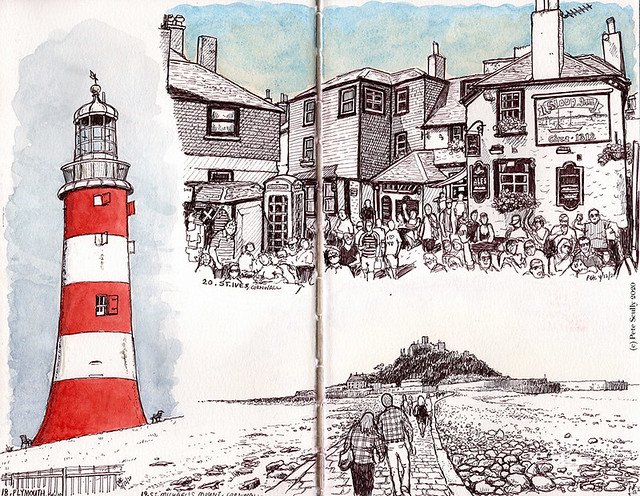